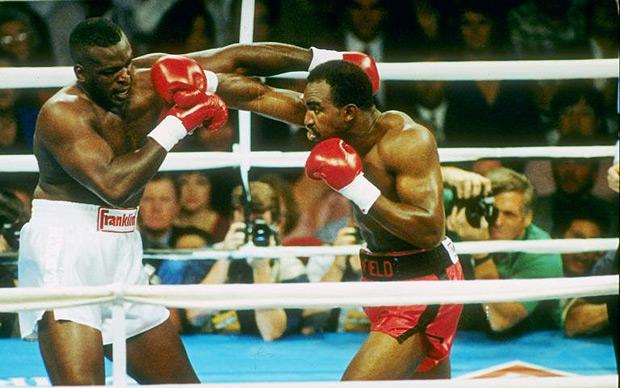 The win over Mike Tyson proved to be an aberration rather than a trend for the disappointing James Buster Douglas, writes Matt Bevan

EIGHT months after he shook the world, causing the biggest upset in boxing history when he stopped Mike Tyson in 10 rounds, James “Buster” Douglas returned to the ring for a $24 million pay-day, defending his undisputed heavyweight crown for the first time.

DOUGLAS won all the belts in Tokyo, scuppering one of the biggest money-spinning matches in boxing. Douglas was thrown in the deep end against Tyson, and he was to be again on October 25 1990, although this time he was guaranteed the biggest purse in boxing history.

HIS opponent that night at the Mirage in Las Vegas was already forging a legendary career, which included a reign as the undisputed cruiserweight champion. “The Real Deal” Evander Holyfield may not have been getting his hands on Tyson just yet, but Douglas was certainly there for the taking.

IT was anything but straight-forward to even get the pair in the ring, as Douglas had recently filed a lawsuit to break his promotional contract with Don King, after King tried to have Douglas’ win over Tyson overturned.

AN out of court settlement was agreed and Douglas would fight Holyfield at the Mirage in Las Vegas, but he had ballooned in weight since the Tyson fight and looked anything but the image of the world heavyweight champion.

STEVE WYNN, the owner of the Mirage who promoted the fight themselves, offered the champion private use of the sauna to get in the shape, but “Buster’s” mind was clearly only interested in one thing, as proven by his $98 food order from room service, whilst he was using it.

THE weight difference was a remarkable 38lbs, with Holyfield at 208lbs looking every inch “The Real Deal”. Douglas had immense ability, but his chronic lack of dedication prevented him from reaching his full potential.

IT was as simple a night’s work as Holyfield could have wished for, as he controlled Douglas like a marionette. He landed 66 of 100 punches – compared to his opponent’s 20 of 69 – before detonating a right cross on Douglas’ chin in the third.

BUSTER made no effort to rise, content to be counted into retirement by referee Mills Lane, whilst Holyfield, who pocketed $8 million, became an undisputed champion at a second weight.

DOUGLAS returned to the ring in 1996, after previously slipping into a diabetic coma, while shockingly overweight. He won eight fights, but the comeback stopped when he was knocked out in a round by Lou Savarese.

HOLYFIELD’S storied career finally came to an end in 2011. A place at Canastota in the Hall of Fame is one of the safest bets you could make and he is rightly regarded as a true legend of the modern era.