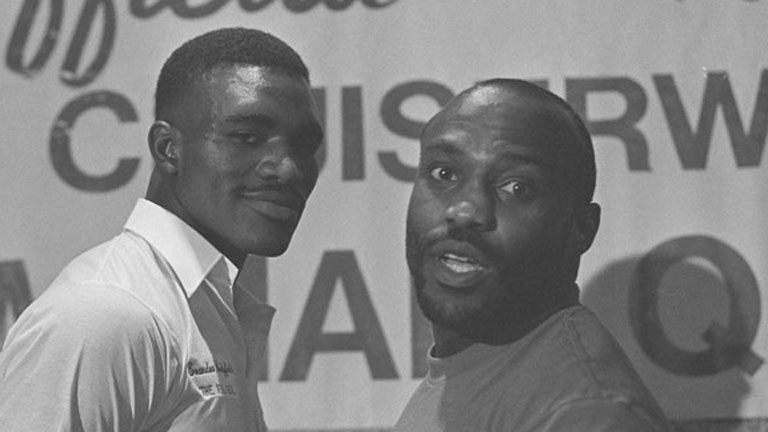 EVANDER HOLYFIELD w pts 15 DWIGHT MUHAMMAD QAWI
July 12, 1986; Omni Coliseum, Atlanta, GE
WITH his Olympic teammates, Pernell Whitaker, Tyrell Biggs, Meldrick Taylor and Mark Breland sitting ringside, Evander Holyfield became the first from that class of 1984 to win an alphabet title. After just 11 fights, Holyfield laid the foundations for the legend he became by going 15 hellfire rounds in a shootout with the brilliant Dwight Muhammad Qawi, even getting stronger down the stretch. To this day, Qawi screams foul play about Holyfield’s second wind in this WBA cruiserweight (or junior-heavy, as the sanctioning body called it at the time) title fight. Holyfield, though, credited his stamina on a gruelling training regime with bicycles and treadmills that simulated the act of climbing.

DID YOU KNOW? More prophetic than poetic, Holyfield wore a t-shirt on the eve of battle that read simply, ‘I AM GOING TO WIN THIS FIGHT’. Bonus miscellaneous info: Holyfield, 6ft 2ins, had a 29-inch waist compared to 5ft 7ins Qawi’s 36 inches.

WATCH OUT FOR: Round 13 is a thriller.