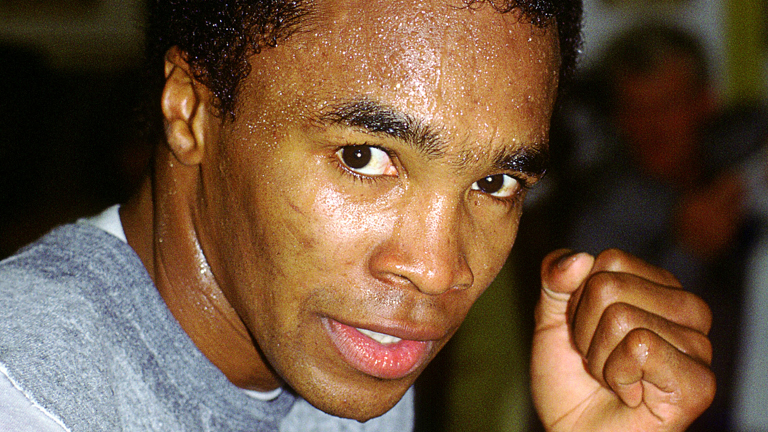 Leonard impressed with his nimble footwork and fast punching. He shook Vega several times but the Puerto Rican kept on doggedly till the end.

Leonard started cautiously before putting an impressive range of punches together. Mayweather was down twice in the eighth before a left hook to the chin finished the fight in the 10th.

Ray retained his unbeaten professional record when he clearly and unanimously outpointed white American Randy Shields in a 10-round welterweight match.

Shields held an amateur decision over Leonard gained in 1973.

Although Leonard dominated the fight he did not have the power to drop Shields at any stage of the fight.

Footnote: Shields would challenge Pipino Cuevas for the WBA welterweight title the following year and lose on points. He received another crack at the belt in 1981, when Thomas Hearns stopped him, on cuts, in 12.

The Olympic gold medallist hammered durable veteran Armando Muniz into defeat on a six rounds corner retirement in the scheduled 10-rounder at the Civic Centre.

Muniz, aged 31 and four-time world welterweight title challenger, was tempted out of retirement by a $40,000 purse for the nationally televised fight and said afterwards it was definitely his last contest.

He had been inactive since being decisively outpointed by Carlos Palomino in a WBC title bout in May and had tried unsuccessfully to get elected to political office in California.

The pattern was set in the opening round when Muniz stumbled after being made to miss with a right and was jabbed and counter-punched as he followed the fleet-footed Leonard around the ring.

By the sixth Muniz was looking bruised and puffy around the eyes. He still went forward but seemed to be having trouble with his left arm and Leonard opened up with a spectacular barrage that had the veteran backing off at the bell.

Muniz said afterwards he had been bothered by the pain in his left elbow during his career and third round against Leonard. He said he had wanted to go on but his corner decided otherwise.

The path through the welterweight ranks continued by comfortably outpointing Adolfo Viruet, the New York-based Puerto Rican, in their nationally-televised 10 rounds main event at the Dunes Hotel.

Leonard, from Palmer Park, Maryland, had moments of difficulty with Viruet’s southpaw awkwardness but dominated most of the fight with fast sharp punching. It was his 21st straight win. Judges Hal Miller and Dwayne Ford scored it 48-42 and 47-42 respectively in Leonard’s favour, while judge art Lurie had it surprisingly close at 47-44.

Leonard (10st 4 lbs) floored Viruet (10st 7lbs) for the first time in the Peurto Rican’s career in the fourth when a cracking right hand lead to the chin dropped him on the seat of his pants. Viruet seemed more surprised than hurt and was up at once to take the mandatory eight count on his feet.

By the eighth Viruet had a bruise and a swelling under his right eye, but he had his best round in the ninth, landing a series of right and lefts to the head.

Leonard slipped to his hands and knees but it wasn’t a knockdown. Leonard regained control in the last round, firing flurries of punches in an exciting finish, and Viruet was obliged to defend desperately against the ropes.

Footnote: Viruet had never been stopped. The previous year, 1978, he’d taken Roberto Duran 10 rounds and outpointed Bruce Curry, who would go on to win a ‘world’ light-welterweight title.

Leonard unleashed a dazzling variety of punches to halt Tony Chiaverini on a fourth round corner retirement at a packed Caesars Palace in their scheduled 10-rounder.

It was Leonard’s 23rd successive win and former Olympic champion form Palmer Park, Maryland, plans to box twice more before he meets Wilfred Benitez at an undecided venue on December 1 for the WBC welterweight title.

Chiaverini, a southpaw from Kansas City didn’t go down but had been punched to a standstill. He had a cut and swelling under his right eye and the right side of his mouth was cut and puffy from Leonard’s sharp left jabs and foiled hooks.

Leonard (10st 11lbs) dominated every round of the nationally televised bout with his superior speed, classy boxing and stiff punching.

Footnote: Chiaverini was far more experienced than Leonard and had been stopped only once previously – in eight by middleweight Bennie Briscoe in 1978.

Ranzany, the defending champion from Sacramento, was floored for the mandatory eight count by a dazzling sequence of punches in the fourth and Leonard hit him without reply until referee Joey Curtis halted the slaughter at 2-41 of the round.

READ this next: Why Leonard could not look himself in the mirror after challenging Wilfred Benitez

More ON THIS DAY articles here