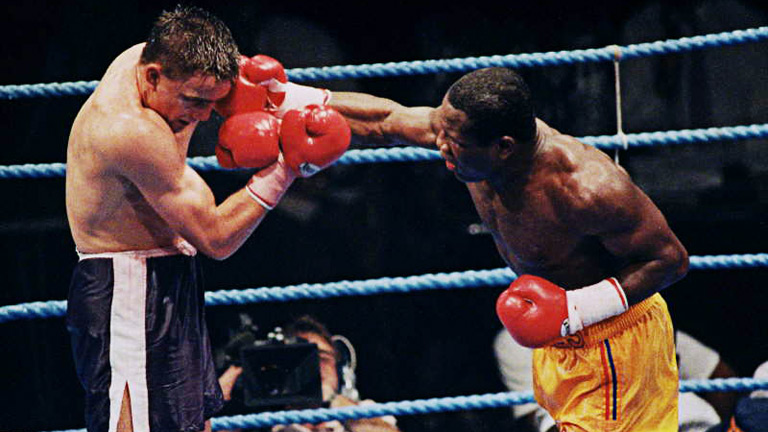 James Slater remembers the 1991 classic between these warriors

TWENTY four years ago today, a fierce boxing rivalry came to an end in London. Britain’s Dennis Andries and Australia’s Jeff Harding fought for the final time in their brutal and fierce trilogy, with the younger man from Down Under winning the rubber-match by the slimmest of margins after 12 exhausting rounds.

Andries and Harding, two of the toughest, most durable light-heavyweights of the 1980s and ’90s first met in the summer of 1989, in Atlantic City, USA. Andries – at this time trained by the great Emanuel Steward, who Andries, famously, had paid a visit to shortly after his thrashing at the hands of Steward’s star pupil, Thomas Hearns; with Emanuel subsequently transforming Andries into a genuine world class fighter – was making the first defence of the WBC crown he had won for a second time with a win over Tony Willis that February. Harding was unbeaten yet he was thought to be a relatively safe first defence for the Londoner known as “The Rock.”

Instead, after a great fight that saw Harding take a fearful hiding in the early and middle rounds, Andries ran out of gas and was stopped with the final bell in sight. Andries had been ahead on all cards yet a bloodied Harding refused to be denied and picked up the upset win. We didn’t know it at the time but a classic trilogy was born.

Revenge was Andries’ the following summer, as he made the gruelling trip to Australia for the return. Scoring one of the finest away wins a British fighter has ever managed – a win that doesn’t really seem to get the enormous credit it deserves – Andries exploded in the seventh-round, throwing everything he had at his rival who, at age 25, was at least 11 years the younger man (there has always been some doubt as to Dennis’ actual date of birth). It was a huge gamble and Andries did come close to emptying himself, but he finally managed to put Harding on the canvas, where “The Hitman” remained until the count of ten. Andries, once a journeyman who could not win the British title, was now a three-time world champion.

The decider would be fought on Andries’ home turf just over a year later. By now almost 38-years-old (or older) and sporting a hard-earned 39-8-2  pro record, the adopted Kronk fighter craved victory in the fight that would end the tough, punishing and damaging series. The two men arguably saved the best fight for last as they bravely went to hell and back in London. The only fight of the trilogy to go the distance, Harding-Andries III was non-stop warfare with a ton of leather both thrown and landed from both sides.

In the later stages it looked like the old man might collapse from sheer fatigue – and Andries really must have been wondering where Harding got his astonishing stamina from – but heart and raw courage saw Dennis to the final bell. It was heartbreakingly close on the cards, with Harding regaining the crown via a 12-round majority verdict that really could have gone either way. Andries looked the epitome of a dejected man as he stood in mid ring. No-one would have held it against him had he decided to retire right then and there. Instead, both he and Harding battled on for some time.

Harding finally retired in 1994, after a points loss to the classy Mike McCallum (in his 23-2(17) career only Andries was able to stop Harding). While Andries soldiered on until 1996, when as a cruiserweight he was stopped by Johnny Nelson; his final ring record reading 49-14-2(30). But both Andries and Harding gave all they had against each other, in the process giving us fans one of the most entertaining and memorable trilogies the light-heavyweight division has ever seen.