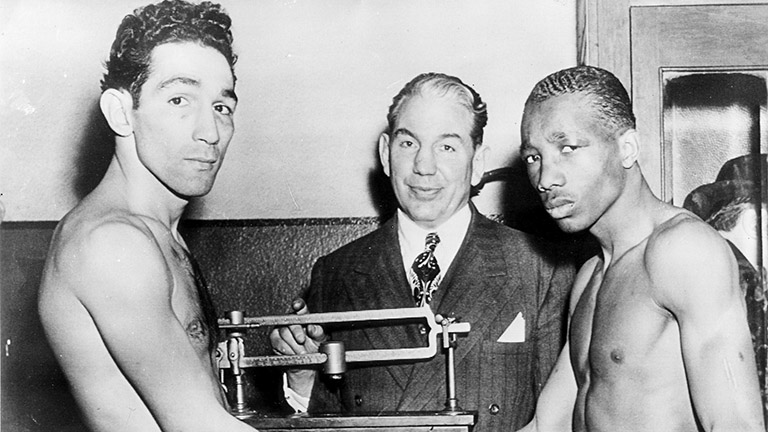 Tris Dixon celebrates the life of Willie Pep, one of the greatest fighters of all-time

THE myth is that Willie Pep, the great featherweight, once won a round without throwing a punch.

It was false, unfortunately, but it tells you instantly how highly thought of his masterful defensive skills were for such a tale to have become lore over the years.

The fight in question was against Jackie Graves on July 25, 1946, and the story came about when Pep was said to have told ringside photographers what he had intended to do, in round three.

And while he did not deliver on his boastful prophecy – whether he had said he would or not is another matter – he enjoyed an extraordinary career, boxing 1,956 rounds in 241 fights.

Speed and skills were his mainstays, and a sense of humour saw him become enormously popular.

He was close to East Coast Mob figures and always quick with a quip, particularly when it came to the fairer sex.

“Three of my wives were very good housekeepers,” he said. “After we got divorced they kept the house.”

There was more… “I’ve got it made. I’ve got a wife and a TV, and they’re both working.”

Still, after turning pro in 1940 – following a paid amateur career (young fighters in Connecticut were often paid to fight) – he built his reputation close to his home, spending the first two years of his pro career fighting in Connecticut and Massachusetts and it was only in his 26th contest when he travelled further afield, to Michigan, where he stopped Eddie Flores in one round.

By the time he met former world title challenger Joey Archibald, in 1942, he was unbeaten in 41 fights and he defeated Archibald via 10-round decision before lifting the New England area featherweight title against Abe Denner.

He served in the armed forces in World War II and defeated current world champion Manuel Ortiz in a non-title bout.

Following another 10 wins, Pep became world champion with Chalky Wright unable to fend off “Will O’ The Wisp’s” title charge over 15 sessions.

World champ Sammy Angott defeated Pep in a 10-rounder, Willie’s first loss in 61 fights (or 62 depending on your sources), but just 10 days later Pep was back in the ring, winning again. Oh, how times have changed. He won five more times in 1943, including two victories over future world champ Sal Bartolo and he won an astonishing 16 bouts in 1944, with the highlights coming against champions such as Willie Joyce and Ortiz before Chalky Wright was beaten once again.

In 36 fights over the next three years, only Jimmy McAllister drew with him as Pep’s stock soared.

However, in January 5, 1946, a plane Pep was travelling in crashed (he suffered a broken leg and back) and many thought the slick star was never the same again as he began to toil against lesser fighters (Archie Wilmer held him to a majority decision while Pedro Biesca floored him).

Yet many of the fights that later defined him were still to come, in particular with his nemesis Sandy Saddler.

Pep notched 15 wins on the spin in 1948 before he ran into Saddler, who took Willie’s title. The former champion said he took Saddler too lightly but gained revenge three months later.

They met again at the start of 1949 and Pep took his crown back having never looked better than in their 15-rounder. A year on and Saddler took the lead in their series, this time stopping Pep in eight rounds but Willie – his eyes swollen and closing – lasted only a round longer against his bogeyman in their fourth and final clash, in 1951. However, their final two encounters were so ill-tempered and foul-filled (butting, gouging, tripping and wrestling) that Pep and Saddler were both barred from boxing in New York State.

“Whenever I lost my head I was playing right into his hands,” Pep said. “This was my mistake. I never should have boxed that way. I couldn’t overcome the guy.”

Willie boxed on, as so many do, well beyond his best. In fact, he fought on for another five years before calling it a day in 1960, aged 38, and then coming back in 1964 for a further two years.

During those somewhat darker days the only name that stands out on his record is that of Hogan ‘Kid’ Basey, who knocked Willie out in nine sessions when trailing on the scorecards.

In retirement, Pep and Saddler boxed exhibitions and the Connecticut star also became an inspector on the local commission and a referee.
But the final years of his life were lonely and quiet one. Dependent on his adoring wife, Barbara, Willie suffered from pugilistica dementia and lived in a nursing home before he died on November 23, 2006. He was in a bad way for those final years but, ever the humourist, once joked: “Nah, I’m not dead. I ain’t even been out the house.”

Apparently, Pep fought Ray Robinson in 1938 in the attic of a feedstore n Norwich, Connecticut. At 130lbs, Robinson outweighed Pep by around 25lbs and, according to Pep’s version, Robinson was already an amateur champion in New York where amateurs were not paid, so he was keeping busy in Connecticut under a pseudonym. Pep, not having heard of Robinson, thought he would still have his way with the visitor but soon was under fire. “He was all over me,” said Pep.

“The longer he goes, the more astonishing he becomes” – writer Red Smith

“He was so clever, he could come up to an opponent from behind” – Don Dunphy