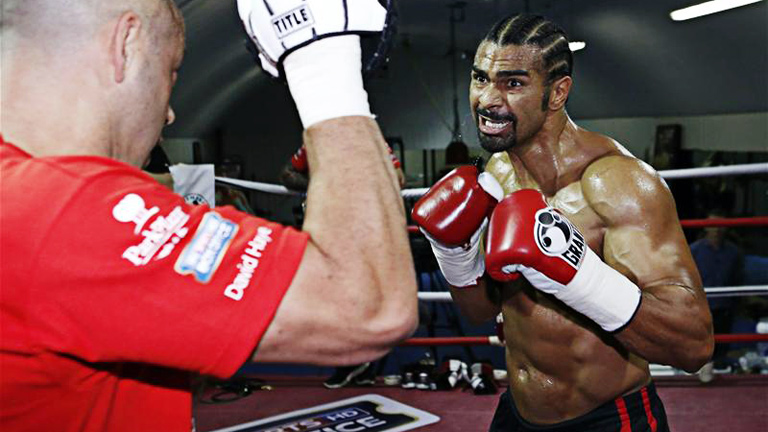 FORMER WBA heavyweight champion David Haye is 34 years old today. Haye is one of Britain’s most successful fighters in recent years and one of the sport’s few remaining box office stars.

HAYE’S attempt to revitalise a stagnant heavyweight division ruled by the Klitschko brothers, collapsed in 2011, when he lost to Wladimir in Germany.

HOWEVER, he is ready to make a comeback and stage another assault for world honours, with rumours that all-conquering adviser Al Haymon could be involved in the next phase of his career.

HAYE was a successful amateur and won a silver medal at the 2001 World Amateur Championships in Belfast. Haye was stopped by Odlandier Solis in the final.

THE HAYEMAKER made his debut as a pro in December 2002 at the York Hall, where he made veteran Tony Booth retire on his stool.

HAYE has fought in many places, including France, Germany and exotic Rotherham. He has also headlined shows at the O2 Arena in London and the MEN Arena in Manchester. However one place he may never have expected to fight in was the Playboy Mansion, where he fought back in 2003 against Vance Winn.

HE claimed the English title in just his eighth fight when he took 95 seconds to stop Tony Dowling and claim his first professional title.

THE Bermondsey star was also once a highly-touted prospect that was shockingly stopped. Haye fought Carl Thompson in his 11th fight and was stopped in the fifth round by the former WBO cruiserweight champion.

HAYE recovered, though, to become European cruiserweight champion, before springing a surprise to become the WBA and WBC king, when he stopped Jean Marc Mormeck in France. He unified the division in his next fight, stopping WBO champ Enzo Maccarinelli in two rounds.

AS well as being a UK citizen, Haye is also a North Cyprus citizen, as he was awarded citizenship in 2010. He used to hold his training camps in Kyrenia and occasionally wears the North Cyprus flag on his shorts.

HAYE has also recently taken the decision to become a vegan, joining other top fighters like Timothy Bradley and Matthew Macklin on the diet.

IN his last four fights against Dereck Chisora, Wladimir Klitschko, Audley Harrison, and John Ruiz, over 125,000 fans have been packed in arenas to see the “Hayemaker”.