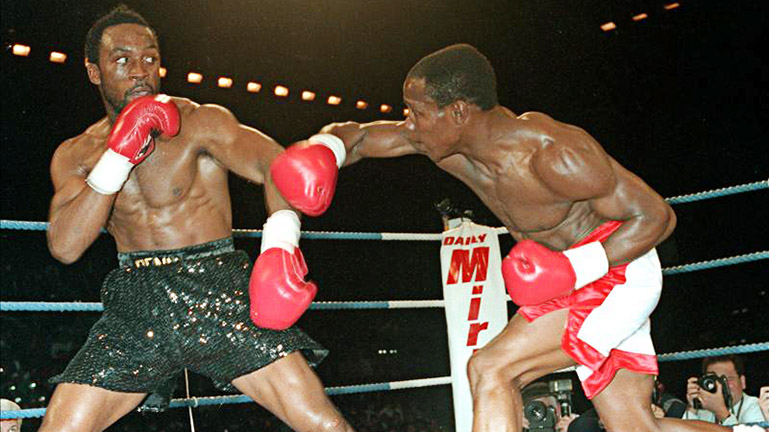 ON November 18, 1990, one of British boxing’s most intense rivalries was born, as middleweights Nigel Benn and Chris Eubank met for the first time, the memorable battle playing out before a massive crowd at The National Exhibition Centre in Birmingham.

26-year-old Benn, known as “The Dark Destroyer,” had a fine 27-1 (25) record, the sole loss coming against Michael Watson the previous year. Eubank, two years the younger man, was unbeaten at 24-0 (15) yet he had never been tested at the highest level. This test would come against the venomous-punching ex-army soldier.

Eubank had began calling Benn out in early 1990, and the badmouthing had finally got to Benn. The fight was now on and the upcoming battle that saw two men with genuine dislike for one another had captured the imagination of the entire British public. Calling himself “Simply The Best,” Eubank stated how “the puncher never beats the boxer.” Eubank felt – and boasted – how he was a smarter, cleverer and more intelligent fighter than was Benn. The no-nonsense champion was determined to make his challenger eat his words.

The experts were pretty much split down the middle, with perhaps a slight majority favouring Benn.

Benn was his usual aggressive self in the early going, while Eubank also fought with the intention of doing damage. Some people expected him to maybe run and fight cautiously early on, but Eubank, though paying a high attention to defence, was more than willing to mix it up. A quite savage, highly-paced battle ensued, and it was Eubank who struck first blood, in a metaphorical sense, by badly staggering Benn at the end of a blistering second-round – this after taking some bombs earlier in the session.

And this proved to be a crucial point: Eubank could hold a shot better, and with less visible sign of distress, than could the defending WBO boss. Benn, caught by a left and a right to the head and stuck on the ropes as Eubank went for the finish, whipped back into action – something he had done when appearing hurt or stunned in previous bouts – but Eubank landed the harder, more effective shots.

The huge crowd could not take its eyes off the action, and in the fourth-round, Benn scored with a vicious right uppercut. It’s doubtful many people realised it at the time, perhaps not even Benn himself, but the champion was as close as he’d ever be to winning the fight. The uppercut had hit Eubank with so much force that Benn had slashed Eubank’s tongue, almost literally severing it from his mouth. Badly hurt and swallowing his own blood for the remainder of the fight, Eubank told no-one of his injury, not even his own corner – so fearful was he, he said later, of the fight being stopped due to the horrific damage.

Later, when learning about this display of raw courage, those fans who felt beforehand that Eubank was a quirky, phoney of a would-be fighter were forced to change their minds. Benn’s big punch came and went and the fight roared on. By the midway stage of the rumble, Benn’s left eye was beginning to swell, and by the later stages the eye was almost completely shut. Benn, who later said he failed to train like a true champion, was now in real trouble.

There was no quit in either man on this night, though, and Benn continued to fire bombs at his tormentor. There was a brief touch of late success for Benn in the eighth-round, as a right to the top of Eubank’s head sent the challenger down. Eubank bounced up instantly and claimed he’d slipped, but referee Richard Steele was having none of it, giving him a count.

The end came in the next session, as Eubank, still being pursued by Benn, landed with a huge right hand to the head. Benn was instantly in a daze and Eubank followed up with fury, forcing Benn to cover up on the ropes. The action again reached centre ring, when Eubank landed another hard right to the jaw, forcing a rubbery-legged Benn into the ropes once more. After a brief salvo from the challenger, Steele dived in and stopped it. Benn was devastated but neither he nor anyone else complained about the stoppage – even though it came with just four-seconds left in the round.

Eubank was the new champ and he was to also hold the distinction as the definitive love him or hate him figure of British boxing for many years to come. He and Benn would meet again, up at super-middleweight, in an eagerly anticipated rematch three years later. But this night belonged to Eubank.