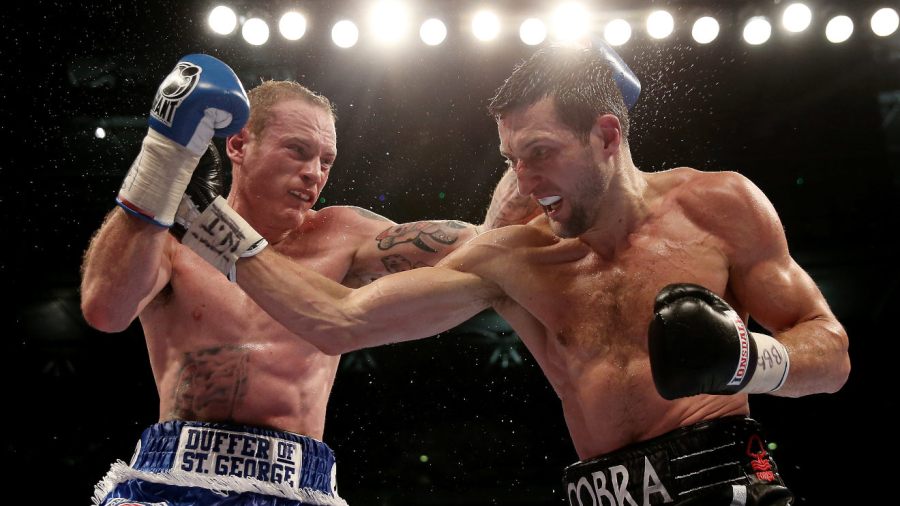 AS Carl Froch tracked his prey to the ropes, he lined up George Groves in front of the media as if he had a message he wanted to share with the world.

Then, as sure as night follows day, came the old left hook-right hand and the power in the right hand was as explosive as anything that had been witnessed during the fireworks and pyrotechnics that accompanied both fighters to the ring in a heaving, adrenaline-filled Wembley Stadium.

A fevered crowd of around 80,000 would have blown the roof off had there been one, but it was the howitzer right hand Froch landed that was the most spectacular moment on an extravagant night packed with the amazing, brilliant, unusual and, most enticingly, the emotional.

It was also the split second that left the fans satisfied they had an emphatic, memorable conclusion to one of British boxing’s bitterest grudges.

Two characters who could not have been more different, who held such confidence of victory and who, every step of the way last week quarrelled about officials, weigh-ins and anything else you could imagine, were left further apart than ever.

Froch was almost instantly transfixed by the idea of the bright lights of Las Vegas while a “gutted” Groves faced a rebuilding task with new promoters the Sauerlands.

“I was very pleased with my performance from start to finish,” said Froch, clearly more enamoured by the latter than the former. “At times I switched off for a couple of seconds, which is human nature given the magnitude of the event, the scale of the whole build-up and the animosity between George Groves and I. There was needle – and there was genuine needle – some of the stuff that he had said and some of the stuff his trainer [Paddy Fitzpatrick] had said in the build-up, the pressure, he’s been in the back of my mind or on my shoulder for nearly a year since the [Mikkel] Kessler fight. Hanging around as he was.

“When I land right hands on people’s jaws like that they get flattened, especially if your punch resistance isn’t renowned for being the best, which George Groves’ isn’t, unfortunately for him. I’m so happy. It was probably the best right hand that I’ve landed. It was the most satisfying right hand and the most satisfying knockout of my whole career.”

Both Groves and Kalle Sauerland spoke optimistically about the 26-year-old’s future.

“It was a split second that let me down,” Groves explained. “Up until then I was boxing very well. So I have to eradicate the complacency and put together a perfect, perfect performance. I was boxing well and got caught with a shot. That’s boxing. Fair play to Carl Froch. He got the job done on the night. I’m still 26 years old and I just boxed in front of 80,000 fans. So I didn’t get the result I wanted but I was boxing well and I’m sure I’m going to have a long and successful career ahead of me.”

Ultimately, however, despite many personal and professional disagreements, the one thing Froch and Groves had settled on was to fight again following the controversy of last November.

Back then, Carl Froch had clawed himself back from a hefty deficit on the scorecards to halt Groves with Howard Foster’s notorious ninth-round intervention, and ever since, the bad blood simmered, boiled and manifested itself as the rivalry went to new levels.

Froch, 10 years the older man at 36, and Groves were poles apart. Their lack of appreciation for one another was abundantly transparent but wonderfully magnetic.

It was a rivalry for its generation; the battle-hardened warhorse against the ambitious pretender to the IBF and WBA thrones upon which the Nottingham man sits so proudly.

The contrasts were obvious throughout the evening at Wembley. Groves had made his bold ring entrance on top of a London double-decker bus, obviously unaware that his final stop would come in a violent heap in round eight.

Froch had pounded his gloves together on the ramp as Queen’s We Will Rock You turned boos into a mass sing-along. Both were accompanied to the ring by fireworks, heckles and cheers in the crackling night air and Michael Buffer introduced the characters to this brutal theatre.

Groves paced like a caged beast while Froch offered only his back and listened to trainer Robert McCracken.

The open-air cauldron was being stirred by raw emotion. Veteran fight scribes sat around me and appeared frozen to their keyboards in the moment, trying to take in things that they had not seen before despite having covered the sport for decades.

It was the first night of fights at the new Wembley and it will take something special to go back there. Something similar, in that case, for this was special.

With the simple sound of the bell, the roars were hushed temporarily, the bad blood expelled to old highlight reels and memories, the fight a nation was watching had begun.

The spine tingled as they finally met in the centre of the ring. Groves feinted, quickly searching for openings.
His movements seemed faster than electric shocks and after an early collision, referee Charlie Fitch, the unheralded official from upstate New York, warned both for their attempts at striking one another on the back of the head.

Groves’ piston left was taking aim at Froch’s body and shoulder, but the champion landed a right near the bell in a session in which it was hard to determine a winner, moral or otherwise.

The fight already had a very different complexion from the first, when Froch’s eyes rolled and his legs collapsed beneath him courtesy of a jackhammer right in round one.

Mr Fitch had a word with both again in the second for more shots behind the head and Froch nearly bundled the Hammersmith challenger to the floor as it threatened to get messy.

A stern right when pulling out of an exchange, something McCracken had asked him not to do over and over in the build-up, caught the veteran, but Froch took it well.

His jab was not as slow or lazy this time, perhaps helped by not having to swim through the treacle of the knockdown he suffered last time.

He was sharp, even if Groves looked sharper. Speed can win fights, of course, but won’t every time.

The crowd grew impatient with moments of inactivity in round three. Neither dominated, neither gave ground.

Another Groves right hand caused Froch to misstep but Carl was in the ring centre, where he wanted to be, in the next. They traded shots, a Groves right for a Froch left, in round four but Carl’s alertness saw him land another right.

If Groves’ strategy was to scrape rounds rather than win them clearly – he spoke pre-fight of delivering a “perfect performance” – it was risky, and in the fifth Froch landed a characteristically thudding blow that saw him pour forwards. Groves battled back but Froch had landed well to the body, although the pressure did not last long. Groves (11st 12 1/4lbs) was looking robust in close but Froch, as Froch does, was relaxing into the battle.

As far as fighting is concerned, he’s a marathon runner, not a sprinter, he just happens to have a wicked turn of pace during the course of the longer races.

Groves’ right scored in round six, his head movement was a feature of both his defence and attack, using his body to sway into range and emloying the momentum to land flashy blows. Froch (11st 13 1/2lbs) again tracked his man into the ropes, once more invested in the body and again Groves warred back. Groves landed a clear left hand from long range, the punch of the fight at that point, in round seven, but he did not fly in behind it. Perhaps he’d learned from the first encounter and was saving energy, maybe he thought it had not done enough damage to follow up on.

Whatever, later in the round Froch ploughed forward with both hands again, working over the body and trying to get shots home upstairs, shipping some of Groves’s straighter shots when his own blows went too wide.

Groves’ footwork was impressive early in the decisive eighth. Both missed big swings on each other’s faces. The Londoner was happy to exchange in close whenever the invitation was extended and then Froch followed him to the strands.

The champion feinted a left and set Groves up with a tight left hook.

Groves, moving to his right and trying to unfurl an audacious left hook, was – a split second later – on his back, his left knee buckled behind him.

“It will be the left hook that finishes Carl Froch,” the challenger had said in the build-up when predicting how he would win. The straight right beats the left hook all day as it has less distance to travel.

A bulldozer from Froch, an absolute cannon of a right hand, had separated Groves from his senses. It was stopped at 2-43, with Groves still down.

The gladiatorial roar of the crowd showed that the thousands who paid at the live gate had been satisfied. So, too, had Froch. His rival, dazed and crestfallen, had been vanquished.

Even afterwards they could, at best, agree to disagree over what had actually been happening in there.

Groves thought he had boxed almost perfectly but made a silly mistake. Froch said he worked on lining George up for the right hand and it was all part of the plan.

Groves, who falls to 19-2 (15), felt he was ahead when the end came. Froch, now 33-2 (24), thought he was in charge and in the lead. The scorecards favoured Froch two-to-one with David Singh and Alejandro Lopez (67-66) against Michael Pernick’s 68-65. I had the champion a point up but two or three sessions were exceptionally close.

“If the referee let it carry on in the first fight, that would have been the result,” said Froch. “They found out. I did promise a conclusive finish and they got it.”

In the end, one shot, one second, was all it took and this extravagant, potent and chaotic concoction of hate, passion, pride and loathing called “Unfinished Business” was finished.