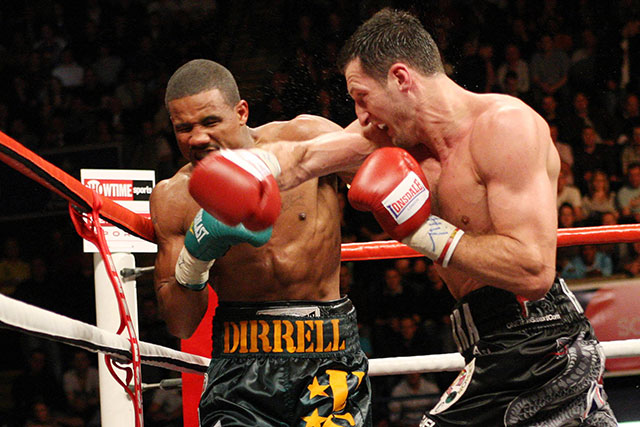 BACK in 2009, the super-middleweight Super Six tournament got underway, as four of the fighters in the mix went head-to-head in Berlin and Nottingham.

IN Nottingham, Carl Froch took a close split decision victory over Andre Dirrell to retain the WBC title, while over in Berlin, Arthur Abraham produced a stunning final round knockout to get the better of Jermain Taylor.

THE Super Six was an incredible concept when it was announced by Showtime, however with fighters pulling out and being replaced by inferior men and the fact it took two years to complete, means there hasn’t really been a similar tournament since its inception.

FROCH entered his fight with Dirrell off the back of a superb last round stoppage of Taylor in Connecticut. He was up against 2004 Olympic Bronze Medallist from Athens Dirrell, who called himself “The Matrix” and was 18-0 as a professional.

FOR Dirrell this was his shot at what Froch’s trainer Robert McCracken called, “the Big Time”. He was a tricky southpaw with a growing reputation and entered the tournament, alongside his Olympic teammate Andre Ward, the eventual winner, as the underdogs.

DANIEL HERBERT predicted for Boxing News, “Dirrell is a live opponent, but I think it will be Froch, who will take control to either shake up Dirrell often enough to win on points, or perhaps even force the referee to intervene late in the fight.”

MEANWHILE over in Berlin, Arthur Abraham was making his debut at 12st, following 10 defences of the IBF middleweight belt, and entered the tournament as many observers’ favourite.

TAYLOR meanwhile appeared on a slippery slope, after losses to Kelly Pavlik, twice, and that last round defeat, with just 14 seconds to go, to Froch when he was ahead on the scorecards.

“KING” Arthur was finding the middleweight limit difficult and the only fights that were realistically worthwhile for him were unification fights with Pavlik and Felix Sturm, both of which were proving impossible to make.

ABRAHAM entered the fight as favourite and with his concussive power, he was expected to get through to Taylor and possibly stop him. But if Taylor managed to stay away from him, it could well be an interesting night.

A WEEK later though, there was no doubt as to who the winner was, when Abraham coldly knocked out Taylor, once again in the final round, with just six seconds to go.

HE suffered a bleed on the brain following the fight and was unable to fight for two years, although he has recently just claimed the IBF Middleweight title again, despite pending criminal charges. He still isn’t anywhere near the force he once was.

ABRAHAM got to the semi-finals of the tournament, but suffered losses to Froch and Ward. He is the current WBO Champion at super-middleweight, and his gone through a trilogy with Robert Stieglitz. He could well take on Paul Smith in a rematch, after the dreadful scorecards tainted their first clash.

LATER that night in Nottingham, Froch edged past Dirrell in a cagey fight where both fighters cancelled each other out. Neither established himself as the dominant force in the fight and it was a tactical affair that British fans weren’t used to seeing in regards to Froch fights, which are usually packed with thrills and spills.

DIRRELL has outstanding talent and caused Froch a lot of problems, spoiling the Champion’s work at every opportunity. But, Froch did what he usually does and no matter the opponent, he found a way to win.

THE Michigan native moved on to fight Abraham in his next fight, winning when the German based Armenian was disqualified when he punched on a break.

BUT since that victory it has been a difficult road for “The Matrix”. He dropped out of a fight with Ward and the tournament, following health complications off the back of the Abraham fight and has only just re-entered the fray as a genuine contender.

AS for Froch, he has gone from strength-to-strength, despite losing next time out to Mikkel Kessler. He may have lost the final to Ward, but became world champion again with a stunning victory in his hometown against Lucian Bute, avenged the Kessler loss, and who can forget his two fights with George Groves.