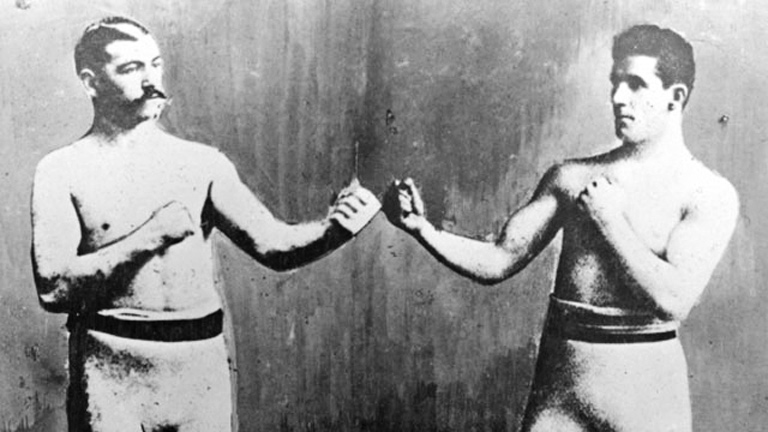 HERITAGE – Born on September 1, 1866, James J Corbett was the son of Irish immigrants, his father hailing from Ballinrobe, County Mayo.

BANK CLERK – As a teenager, Corbett worked at the San Francisco branch of the Nevada Bank as an assistant receiving teller. It was this job which gave Corbett a glimpse of the refined, classy lifestyle he himself would later become synonymous with.

BOXER – “Gentleman Jim” was clearly well educated outside of the ring, but it was at San Francisco’s Olympic Athletic Club, under the tutelage of an English professor named Walter Watson, where Corbett developed his boxing skills. Soon after turning professional he developed a local rivalry with a Jewish boxer named Joe Choynski, and after their first bout was halted by the police, Corbett claimed a 16th round knockout over his rival on a barge in the San Francisco Bay. An epic three hour, 61 round no contest with ‘the Black Prince, Peter Jackson, two years later in May 1891 then established James as the premier contender for John L Sullivan’s heavyweight title.

EXHIBITIONIST – Following his victory over Jackson, Corbett first shared a ring with Sullivan in a four-round exhibition match at San Francisco’s Grand Opera House while the champion was on a theatrical tour on June 26, 1891. It was this brief meeting, in formal evening wear, which gave Corbett a taste of what was to come.

HEAVYWEIGHT CHAMPION – Almost a year and a half after this meeting, Corbett’s manager, William A. Brady, secured his man a shot at the heavyweight title. It was to be the first fought under the Marquis of Queensberry Rules and would take place in a purpose-built 10,000 seat arena at the Olympic Club in New Orleans on September 7, 1892, for a winner-takes-all purse of $25,000. Over 80 years before Muhammad Ali allowed George Foreman to punch himself into exhaustion before going in for the kill, Corbett laid the foundations for this tactic by dodging Sullivan’s power punches and landing sharp, crisp counters to leave his rival spent as early as the 14th. In the 21st, Sullivan was there for the taking and Corbett claimed the title with a hard right to the champion’s jaw, followed by another to leave Sullivan face down on the canvas.READ Corbett’s account of the historic victory

INNOVATOR – Corbett’s triumph swayed the public toward the realisation that the heavyweight champion did not have to be rough and brutal, but could instead be decent and well-dressed. He also dispelled the myth that in order to be successful in the sport you had to possess a powerful punch, which increased boxing’s popularity as those who were scared of lacking the power to be competitive inside the ring were encouraged by Corbett’s technical approach.

BOXING COACH – Due to boxing being outlawed in most states at the time, not to mention the absence of boxing commissions to organise and regulate the sport, Corbett rarely defended his title and eventually lost it in his second defence to Bob Fitzsimmons on St Patrick’s Day 1897. Denied a rematch with Fitzsimmons and failing in two separate bids to recapture the crown against James J Jeffries, he retired with an 11-4-3 record. Along with a blossoming career as an actor, Corbett continued coaching at the Olympic Club.

ACTOR – Corbett was not the first athlete to have taken to the stage, but he stood out for being one of the few who could actually act. Most of his income after he retired came from his appearances in plays, one-man shows recounting his boxing career and in silent films.

BOOKS AND FILMS – His memoirs, The Roar of the Crowd: The Rise and Fall of a Champion were published in book form in 1925, and Errol Flynn played Corbett in the 1942 Warner Bros. film based on his life, Gentleman Jim.

DEATH AND HALL OF FAME – James J Corbett passed away from cancer at his home in Bayside, New York on February 18, 1933, in the arms of his wife, Vera. He was interred at the Cypress Hills cemetery in Brooklyn, New York. In 1990, Corbett was inducted into the International Hall of Fame in Canastota, New York, in the Old Timer category.