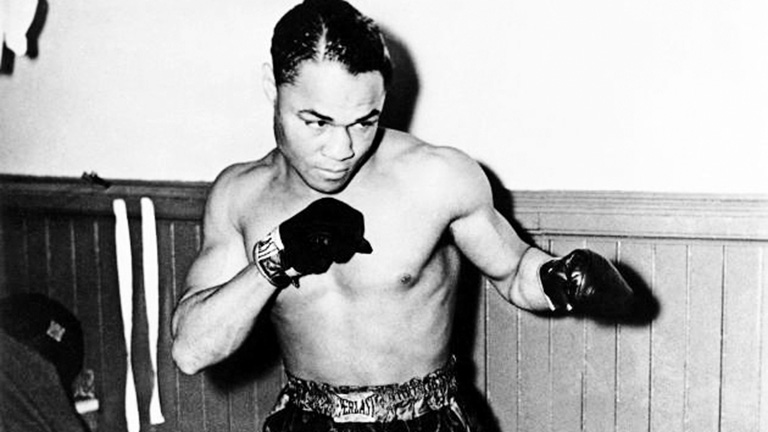 Daniel Herbert tells the story of the legendary Henry Armstrong

HENRY ARMSTRONG was a marvel, a little man who achieved a huge feat – holding three world tiles at the same time, when there were only eight in the whole of boxing.

Nowadays, winning a world championship has been rendered so much easier because of the proliferation of sanctioning bodies and weight divisions. When Armstrong ruled the featherweights, lightweights and welterweights in 1938, it made him the second biggest star in the sport behind heavyweight champion Joe Louis.

If his reign didn’t last long – he was an ex-champion at the age of 28 – it was because his high-energy style made him burn out quickly. But what highs he reached in the few short years he was at the top.

Armstrong stood only 5ft 5 1/2ins but had the upper body of a much bigger man, with a reach of 67ins. (By comparison, Roberto Duran’s reach was 66ins). His tactics were simple: he would crowd his way forward, bobbing, weaving and throwing hooks and uppercuts.

He worked himself up into a sort of perpetual motion, throwing so many punches that opponents became disheartened and were eventually overwhelmed. His non-stop work enabled him to tackle, and defeat, much taller and heavier men. This was, of course, an era when referees were much more lenient; would effectively let the boxers get on with it, barring an outrageous foul.

Armstrong’s hunger was literal as well as metaphorical. Born Henry Jackson in St Louis, Missouri in 1912, he lost his mother aged five and two years later was selling newspapers on the streets to help feed a family of 13.

He did box amateur but was always going to punch for no clued of what was to come: southpaw Al Iovino knocked him out in three rounds in North Braddock, Pennsylvania.

Another fight in same state four days later produced a win, but it wasn’t until August 1932 that Armstrong would box pro again. With fights between blacks and whites not permitted in St Louis, Henry relocated to Los Angeles, where he lost his first two fights but soon found winning form.

In his early LA days Armstrong had to shine shoes at 7th and San Julian to keep the wolf from the door, but gradually he rose through the ranks and attracted the attention of Al Jolson. The movie star bought his contract for $10,000 and with co-manager Eddie Meade thought about how to move their charge.

“Joe Louis was getting all the big gates, so Jolson and Meade came up with a plan to get me more notoriety,” Armstrong told Richard Hoffer of the Los Angeles Times in 1981.

“Jolson never knew much about boxing, but I figured he knew fame. Him and his Hollywood ideas. They said, ‘Win three titles and you’ll be almost as famous as Joe Louis’. I said, ‘Was that all?’ Jolson said, ‘No, you’ve got to do it in six months.’ They didn’t want much.”

Armstrong was mostly a Los Angeles attraction, but the big money was on the East Coast and in March 1937 he made his Madison Square Garden debut, stopping Mike Belloise in four rounds.

By October, his team had persuaded Petey Sarron to defend the world featherweight tile against him and Armstrong won title No. 1 when he knocked out the Birmingham, Alabama man in round six.

He would never defend it – his eyes were on bigger things. Logically, the lightweight championship would be next, but holder Lou Ambers had a shrewd manager in Al Weill.

Remembered Henry, “Ambers had seen how I was knocking everyone out and said, ‘Let Armstrong do something else.’ So we went after Barney Ross, the welterweight champion. He’d beaten everybody in the 147-pound class and was glad for the fight, I was drawing so much money. He said, ‘I’ll fight the shrimp’.”

Their May 1938 battle took place in Long Island City and if Ross wasn’t a big welter at 10st 2lbs, Henry was a pound and a half inside lightweight at 9st 7 1/2lbs. Yet he swarmed all over the champion, dishing out a belting for a lopsided 15-round decision. Ross never boxed again.

Three months later Ambers put up his lightweight crown at the Garden and Armstrong won a split decision. Admitted Henry, “That was my toughest title fight – Ambers cut me up pretty bad.”

Armstrong relinquished his 9st belt and set about making money by defending the welter crown, while regularly scaling only around the lightweight limit. There was plenty of travelling involved.

“I was fighting so much I hardly knew where I was,’ Armstrong told Hoffer. “We’d be driving in the car and I’d say, ‘Where are we off to now?’ They’d say Madison Square Garden or something and I’d say, ‘OK, good night’.”

In May 1939 he came to London to defend against British champion Ernie Roderick. He trained at Butlin’s new holiday camp at Clacton and found it so cold he sometimes went out wearing three jerseys.

But it couldn’t prevent him retaining with a wide points victory over a man who was a good fighter by European standards. The Boxing News report gave an interesting insight into Henry’s fighting style: “Armstrong takes many punches on the top of his head or upon his forearms and elbows, but he scorns completely the orthodox methods of defence adopted by the majority of present-time ringsters. In his own way Armstrong is the complete fighting machine.”

Yet three months later, in his next fight, Armstrong suffered his first serious setback for many years when Ambers regained the lightweight title with a unanimous points decision. Penalties for repeated low blows cost Henry the fight.

Still, he had the welter crown and there was money to make by taking it on the road and defending across America against a variety of challengers, some worthy and some not-so-worthy.

In March 1940 he stepped up in weight again, challenging Ceferino Garcia for the California sliver of the world middleweight title. Garcia, whom Armstrong had beaten in a welter title defence, was really a light-middle at 10st 13 1/2lbs and Armstrong a light-welter at 10st 2lbs.

Scoring referee George Blake let Garcia retain with a 10-round draw that upset the challenger. “He said his score sheet got taken away from him and was torn up by some kids,” said Armstrong. “Boxing was pretty rugged then.”

Never one to let the grass grow under his feet, Armstrong retained his welter title four more times before running into Fritzie Zivic in October 1940. A capable fighter, and a dirty one too, Zivic almost stopped the champ in the last round but had to settle for a unanimous decision.

The wear and tear of a long career was by now catching up with Henry, who ended the fight with both eyes almost shut and a badly gashed mouth. But he showed great courage as he never stopped taking the fight to Zivic.

When a rematch three months later saw Armstrong halted in 12, it was clear his world title days were over. But fighting was what he did, so he kept going, and in August 1943 at Madison Square Garden met a talented youngster named Sugar Ray Robinson. He lost unanimously over 10 but returned to the sport’s Mecca the following year to stop the ill-fated Al Bummy Davis in two rounds.

There were nine more fights, the last coming in February 1945 at Oakland Coliseum back on the West Coast where his great ride had started. He dropped so-so Chester Slider in round three but was declared a points loser after 10 and that was it.

In retirement Armstrong got hooked on booze before finding religion and becoming a Baptist minister back in St Louis, where he also served as assistant director of the Herbert Hoover Boys Club. He didn’t really follow boxing, which he felt was neither as glamorous nor competitive as it had been in his day.

But then, after what he achieved, everything else must have seemed insignificant.

THE News of the World’s Frank Butler attended the Armstrong-Ernie Roderick fight as a young man and had access to the champion’s dressing room pre-fight. He told a story that explained Armstrong’s incredible workrate.

Said Butler, “His huge manager Eddie Mead warned me that Henry would shadow-box for at least six minutes before leaving for the ring.

“It duly happened and Henry pranced around the room at a terrific place for two rounds. I’ve never seen a fighter so active in the dressing room. Mead told me the fighter had a slow heart-beat which he claimed was the reason he could keep going for 15 rounds.

“When the bell sounded for the first round, Armstrong didn’t seem to be warmed up despite his actions in the dressing room. He came out slowly and Roderick, boxing superbly, jabbed the champion with straight lefts and let go with his right several times.

“But Armstrong came out faster for the second round, faster still in the third and from then on threw so many punches that Ernie could never settle down to get his left working again. He was too busy defending himself.”

Henry Armstrong was ranked No.3 in the Boxing News 100 Greatest Fighters of All-Time. Order your copy here