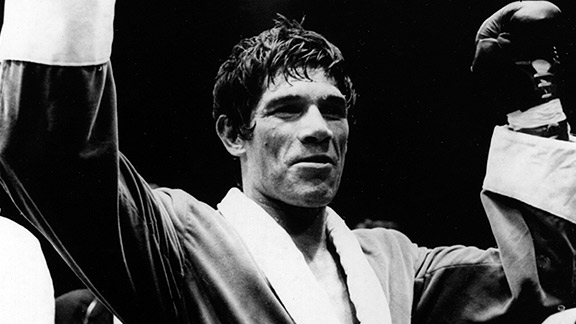 UNDOUBTEDLY an exceptional fighter, Carlos Monzon reigned as world middleweight champion for seven years, defended his title 14 times, was never knocked out or stopped and only lost three points decisions – all in early part of his career. Monzon had none of the flamboyance of a Sugar Ray Robinson or a Sugar Ray Leonard but nevertheless was a formidable fighting machine. In the ring he was cool under fire, grim-faced and upright, cunning and seemingly one-paced. He overcame his opponents with hard, straight thudding punches, methodically and clinically taking them apart. Outside the ring he had a dark side. He was continuously in trouble with the law for various indiscretions, including punching a photographer, and his short life ended in violence and destruction.

Born in San Javier, Argentina in 1942, the family moved to nearby Santa Fe and settled in the city’s slums. From an early age he learnt the art of survival on the streets and ran wild. He sold newspapers, shined shoes and delivered milk. He regularly got into trouble. He started a riot at a football match and was also arrested for brawling on a bus. His mean and aggressive nature was already evident as a young man and, as with many before him, boxing came to his rescue. Monzon drifted into a gym by way of refuge from the harsh streets. He did well as an amateur winning 73 of his 87 fights and turned professional at the age of 20 because he realised it offered him the chance of a better life. He began building up his remarkable career while not venturing out of Argentina. In seven years campaigning he had over 80 fights winning the Argentinian and South American middleweight titles. He twice beat the capable Jorge Fernandez who had campaigned successfully in the United States, losing a world welterweight title shot against Emile Griffith in 1962. Monzon lost three points decisions, to the experienced Antonio Aguliar in his ninth fight, to Felipe Cambiero (Monzon was reportedly floored three times) and to Alberto Massi in October 1964. He beat all three in subsequent fights. Monzon also fought nine draws in his career. Among the men who held him was Philadelphia’s “Bad” Bennie Briscoe in 1967. Five years later Monzon outscored the hard punching American in a title defence.

Although barely known outside his native Argentina his two wins over Jorge Fernandez and American fighters like Doug Huntley, Charlie Austin and Tom “The Bomb” Bethea gave him a rating in the prestigious “Ring Magazine” and in 1970 he journeyed to Rome to challenge the Italian idol Nino Benvenuti for his world middleweight title. It was his first fight outside his native country and the unknown Monzon was expected to provide a showcase for Benvenuti’s sophisticated style. But the cool Argentinian was a revelation. He methodically wore Benvenuti down with his heavy, correct punches and knocked him out with a crushing right in the 12th round. The Italian demanded a rematch but was summarily dispatched in three rounds in the return in Monte Carlo. Monzon’s 14 successful defences of the title included two wins over five time world champion Emile Griffith. Monzon stopped Griffith in 14 rounds in September 1971 becoming one of only two men to stop Emile in a 112 fight career, the other being the murderous punching Rubin “Hurricane” Carter. Then, two years later, Monzon easily beat the dogged Griffith again outscoring him in Monte Carlo. Monzon’s other victims included handsome Frenchman Jean-Claude Bouttier twice, Tom Bogs, Denny Moyer, Tony Mundine, Gratien Tonna, Tony Licata (his only fight in America) and welterweight great Jose Napoles. He finished his career with two close decisions over talented Colombian Rodrigo Valdez. Two months after beating Valdez in Monte Carlo, Monzon announced his retirement from the ring in August 1977. He said: “After the bout I looked in the mirror and said to myself Monzon was never floored. Monzon is a great champion. He must always be remembered as a great champion. So I quit.”

Once he had retired Monzon’s life began to unravel. He had always flouted the law and had frequently been arrested for assault. His first wife shot him and he carried a bullet in his back for the rest of his life. Several of his businesses failed. He tried training fighters, accompanying fellow Argentine Carlos Herrera to London when he lost to Maurice Hope for the WBC light-middleweight title at Wembley Arena in 1980. He began to drink heavily and he was jailed for a month in 1981 for possessing a gun. He had frequent violent rows with is partner Alicia Muniz which often involved the police. On St Valentine’s Day in 1988 another furious row broke out at a party and both Monzon and Alicia fell off the balcony of their apartment in Mar del Plata. Muniz died and Monzon was sentenced to 11 years in prison for her murder. After five years he was released on parole and on January 8th 1995 he and a friend were driving back to Las Flores prison when his car overturned. Both men were killed. Monzon was just 52.

TRUE GREAT
MONZON totally believed in his own legacy. He said, “Sugar Ray Robinson may have been great, but I am greater. Robinson held the title several times, but that’s because he kept losing it. I’ll only hold it once because I’ll never lose. That’s great.”

MONZON’S renowned objectivity was illustrated on the morning of his fight with Roy Dale in Rome in 1973. Informed that his brother had been killed in a gunfight in Argentina the impassive Argentinian just nodded, stepped into the ring and knocked out Dale in five rounds. He then said, “Now we go to the funeral.”

MONZON had nine draws in his career. He avenged each draw in returns with the fighters who held him except for one. In June 1966 Ubaldo Bustos shared the verdict with him over ten rounds in Santa Cruz. Amazingly fellow Argentinian Bustos only had ten fights. He won his pro debut and then lost every other fight except for holding Monzon in his sixth bout. He was knocked out three times.

“MONZON was the complete fighter. He can box, he can hit, he can think and he is game – all the way,” said Angelo Dundee.