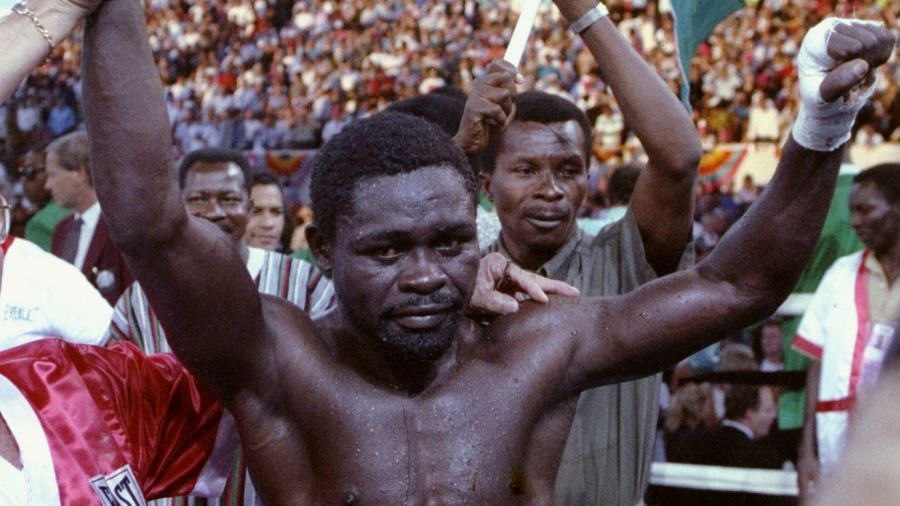 SEVERAL candidates have been proposed for the title of greatest fighter ever to have come out of Africa. Nigeria’s Dick Tiger was world champion at both middleweight and light-heavy (when there was no super-middle division between), while South Africa’s Vic Toweel was undisputed world bantam king.

But for many the best is an easy choice: Azumah Nelson. The Ghanaian reigned as WBC featherweight king from 1984-87 and twice held the WBC title up a weight at 9st 4lbs. His second reign at the higher weight ended in January 1997, when he was 38 years old and nearly 15 years past his first world title contest.

Add that Azumah was a gentleman both in and out of the ring, with nary a whiff of scandal about him, and here was a man who was a great advertisement for the sport, his nation and his continent.

Nelson could have been a much bigger star if like many before him he had based himself exclusively in Europe or the USA. Instead, as a devoted family man he lived in Ghana and travelled mostly for fights and training camps. Often he was hidden away on the undercards of shows promoted by Don King, with whom he had signed.

In Europe he could have been more famous if he had fought Barry McGuigan, who held the WBA 9st title when Nelson was the WBC champ. A showdown would have been huge but never happened because, as has become common, each had earning potential to fulfil on his own. When Barry lost his crown in June 1986, Nelson was still WBC king and had to look elsewhere for paydays.

The closest they came to meeting was at the 1978 Commonwealth Games in Edmonton, Canada, when they won gold medals at adjoining weights (McGuigan at bantam, Nelson at feather). The next big amateur showcase would have been the 1980 Moscow Olympics, but for some bizarre reason Nelson ended up representing Africa in the October 1979 World Cup competition at light-welter, two weights above his natural division, and turned pro in disgust.

He progressed steadily, winning the Commonwealth title, but in June 1982 was still a 13-fight unknown when he received a surprising call-up to challenge WBC champ Salvador Sanchez at Madison Square Garden.

The scheduled challenger had dropped out and Nelson was drafted in, to the bemusement of many in the game. Nelson held a no. 6 ranking with the WBC but it was feared he might prove another Mensah Kpalongo, who three years earlier has benefited from a similar high listing to fight WBC bantam ruler Carlos Zarate – and embarrassingly folded in three rounds.

One who knew how good Nelson was, was respected coach Charles Atkinson, in whose Liverpool gym Nelson had been training on and off since 1980.

Nelson gave Sanchez all he could handle, and was actually leading on one card when he was stopped in the 15th and last round.

Eddie Cool, Boxing News’ veteran New York correspondent, called it, “The most exciting featherweight bout ever held in the new Madison Square Garden, and the best since the one in which Willie Pep regained his title from Sandy Saddler in the old Garden”.

If ever there was a case of a fighter making his name in defeat, this was it. US television viewers now knew who Nelson was. Still, it was another two and a half years before he got another title shot, against Wilfredo Gomez in Puerto Rico. This time there was no mistake as Nelson hammered talented but fading Gomez into an 11th-round defeat.

The following year Nelson came to the UK and dispatched Pat Cowdell with one punch, an arcing left uppercut-cum-hook. It was a sensational punch.

In 1988 the 5ft 5ins but solidly-built Nelson moved up to super-feather and won a contested split decision over Mario Martinez for vacant WBC belt. A year later Azumah would stop Martinez in the 12th round of a rematch.

He was one of the best fighters in the world, but had to travel to find opponents. King couldn’t make money out of him, so was reluctant to invest cash into luring big name opponents to fight the Ghanaian.

In May 1990 he bit off more than he could chew in challenging Pernell Whitaker for the WBC lightweight title and lost on points. But “Sweet Pea” would go onto to hold world titles all the way up to 11st, so it was no disgrace.

Two of his biggest nights came against Jeff Fenech. The all-action Aussie had held world titles at three weights when he got the worse of a draw against Nelson in Las Vegas in June 1991. A return nine months later, on Fenech’s home turf of Melbourne, saw Azumah destroy him in eight rounds. He blamed malaria for his poor performance in their first encounter.

Nelson boxed on through the 1990s, defying age to see off young challengers in a variety of locales. In March 1997 he lost his WBC super-feather belt to Genaro Hernandez, but event then the decision was split.

His last real fight was in July 1998, when he lost to Jesse James Leija, against whom he’d already drawn, lost and stopped in title bouts. But in 2008 he bizarrely came out of retirement for a third fight with Fenech, who won a majority 10-round decision. Both scaled well over their best weight and it was a sad coda to the careers of both.

When he was a world champion in the mid-1990s, Nelson came to London and visited the BN offices. He charmed everyone with his friendliness and class. It was a shame he never enjoyed the fame his talents deserved.

Eric Armit, Boxing News’ long-time world results expert, was consulted by the WBC over whether Nelson was a worthy opponent for Salvador Sanchez. Said Eric, “I’m ashamed to admit I actually hesitated, but after a few moments’ consideration I told them I was confident Azumah would give Sanchez a good fight.” Did he ever!