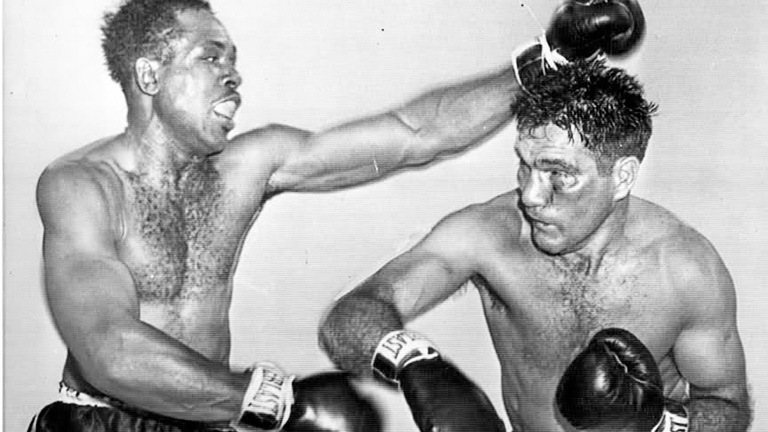 Maxim was down for “seven” in the eighth, and took a further count of “eight” in the eleventh. Each time he weathered the storm, but the decision in favour of Moore was unanimous. Referee Cy Guthrie scored it 145 points to 137, and the two judges 148-145 and 145-134 respectively.

This was Moore’s third win over Maxim. He took the title from Joey in December 1952 and successfully defended it against him six months later.

There were few incidents. Moore favoured a close-quarter attack, and his short hooks from both hands forced Maxim on the defensive, where he tried to unsuccessfully to keep the fight at long range.

In the eighth came the first thrill. Moore unleashed a right hook to the jaw after a spell of in-fighting, the speed of which caught Maxim completely unprepared. Down he went, flat on his back. At “three” he rolled over and struggled to his feet in a groggy condition at “seven.”

With less than half a minute to go before the round ended, Moore threw everything into a knock-out attempt, but Joey still had his ring instinct, and held on until the bell.

Another chance fir the champion came in the eleventh, when a quick right uppercut to the jaw sent Maxim to his knees. He wisely took “eight” before rising and seemed none the worse.

Indeed, realising that he must be behind on points, Maxim went into the attack in the last four rounds. Moore appeared to be tiring slightly. He had enough left to hang on to his early lead, but Maxim finished the stronger. At 12st 7lb Moore was three-quarters of a pound heaviwer than the challenger.

After this third meeting with Maxim, it does not seem possible that Moore can continue to ignore the claims of Harold Johnson, who won all his six bouts in 1953, including victories over Ezzard Charles and Jimmy Slade.

They have already met four times, with three wins to Moore. All bouts went the distance. And Johnson is now a much improved boxer. So watch out, Archie.

NOTE: Six months later, Maxim returned to action to post an upset win over unbeaten youngster, Floyd Patterson. Moore, meanwhile, had three more bouts in 1954, the last of which would be a 14-round stoppage win over Harold Johnson.

The incredible life of Archie Moore

Read more ON THIS DAYS