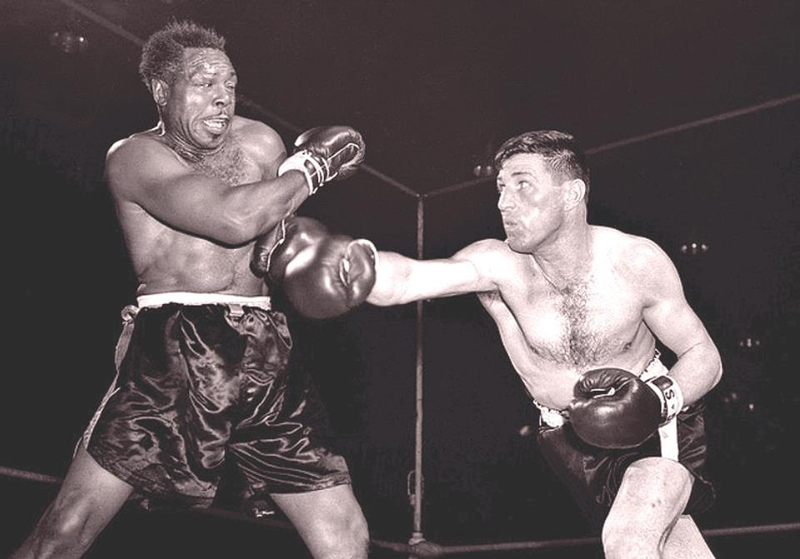 EVEN though he was 17 years into his career before receiving his first crack at a world title, boxing fans hadn’t seen Archie Moore’s masterpiece yet. Turning pro in 1935, Moore honed his craft against the avoided mob known as ‘The Murderer’s Row’, taking colours from everyone’s palette along the way to paint a picture of an extremely dangerous man.

After beating Joey Maxim for the title, ‘The Ol’ Mongoose’ remained highly active, defending his belt while pitting his wits against the best heavyweights of the day. Making his seventh defence in his sixth year of his reign, Moore travelled to Montreal to face the Canadian and British Empie (now Commonwealth) champion Yvon Durelle.

‘The Fighting Fisherman’ was ranked the number three contender but not seen as a threat to Moore, a 3-1 favourite. Even with his age disputed by the press, with United Press International saying ‘he was either 42 or 45’, Moore was seen as a heavy favourite, and was aiming to break a long standing record held by Young Stribling as the boxer with the most knockouts in history.

The Canadian slugger felt he was in with a chance with the 23-year pro and was ready to go to war. He said prophetically, “One of us will go by the 11th or 12th rounds. I’m going to win or they’re going to carry me out.” The same Associated Press report stated that a win for the Canadian would be “One of the great upsets in fistic annals”.

Referee Jack Sharkey, the former world heavyweight champion, must’ve felt he was back in his heyday. Durelle fought in the mould of Jack Dempsey, cutting in on Moore early in the first round and folding him with a heavy right hand. Getting to his feet just before the 10 count and looking in need of a walking frame, Moore had to use all his experience to get out of the round, slipping, catching and parrying what little he could and dragging himself up off the mat twice more as Durelle tried to drown him.

Moore said after the bout that “He caught me clean every time he caught me.”

The champion found his rhythm over the next few rounds, but in the fifth Durelle barged through Moore’s defences again with a smashing right. This time Archie not only braved the storm but shot his own lightning bolts through the clouds, getting the better of the exchanges as the round came to a close.

From there on it was the savvy veteran setting all the traps. Moore chopped Durelle down in the seventh, 10th, and twice in the11th, demolishing the brave Canadian with innumerable power punches to score his record breaking 127th inside the distance victory.

The Canadian Press said it was ‘perhaps the most spectacular light-heavyweight title fight in boxing’s history’ and the Associated Press called it ‘one of the most exciting fights of the last 10 years’. Just like Moore himself, the quality of this bout has endured for decades, and holds its own with the greatest fights of all time.

The wonderful tale of Archie Moore

Boxing News named Moore-Durelle as No.8 in their 100 Greatest Fights of All-Time