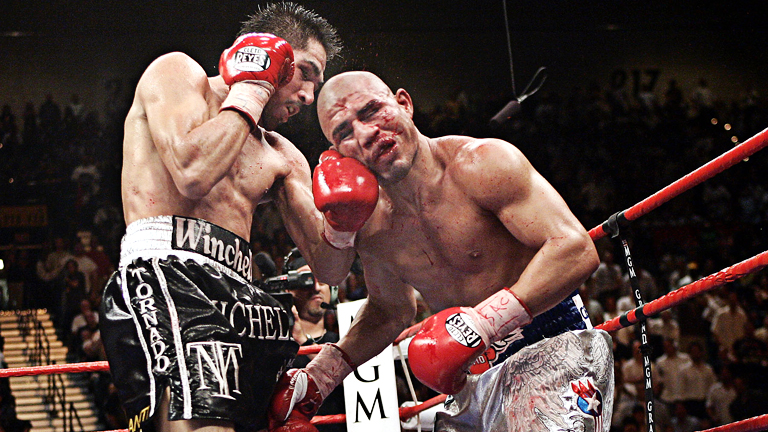 THIS fight had a tagline “La Batalla” (The Battle) that ultimately proved apt, although for the first five rounds it resembled more a scintillating procession as Miguel Cotto used speed and precision to dictate. However, Antonio Margarito gradually forced his opponent to fight at a pace he was uncomfortable with, creating his best chance for victory and an enthralling fight into the bargain.

Cotto was the undefeated East Coast draw coming into his prime, having won world titles at two weights. Margarito was the gnarled, perennially underrated former IBF and WBO welter king who had lost to Paul Williams just three fights before. This was thought to be Cotto’s coming-out party in Sin City.

It certainly began in that manner, as the Puerto Rican hero danced and dazzled his way to an early lead but, ominously, the shots he’d used to destroy fighters in two divisions simply bounced off the durable Margarito.

“Tony” bullied his way back into an absorbing contest with a concerted body attack and intelligent aggression. His cutting down of Cotto’s space forced myriad exciting exchanges that Margarito gradually got the better of as his prey tired. Margarito hurt Cotto in the seventh and 10th before eventually knocking him down twice in the 11th to force Miguel’s uncle and trainer Evangelista Cotto to throw in the towel at 2-05.

“The game plan was to come out strong and to wear him down and knock him out. I got him with body shots, and then I hit him in the head, and then knocked him out,” said Margarito.

The loser has enjoyed a brighter future, adding a light-middle strap and gaining one-sided revenge over Margarito, before halting world middleweight champion Sergio Martinez in June this year to cement his place in history. Antonio was swathed in controversy after being discovered with doctored handwraps before his next fight, a loss to Shane Mosley, and he retired after Cotto battered him to defeat in their 2011 rematch.

Margarito made a comeback in March of 2016 with a lucklustre decision over Jorge Paez Jnr.