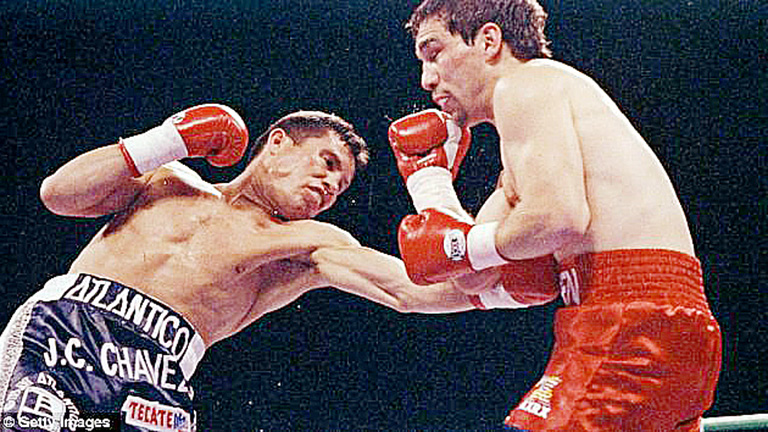 BEFORE even stepping into the ring with fearsome WBC light-welterweight champion Julio Cesar Chavez on February 20, 1993, Greg Haugen had already given the expected record attendance a reason to hate him – by claiming the champion had only reached his record of 84-0 by fighting ‘Tijuana taxi drivers’ and even going so far as to suggest that there were not even 130,000 Mexicans who could afford a ticket to the fight. He said: “Look at his first 50 fights. If you recognise those names, you are a boxing historian. They’re nothing but palookas. Am I supposed to be scared?”

The 32-year-old challenger – a former IBF lightweight and WBO light-welterweight boss – had built his gritty reputation through a series of ‘Tough Guy’ contests in the bars of Anchorage, Alaska, and his claims of getting arrested and thrown out of school every weekend as a teenager.

Chavez, 30, was arguably the toughest, and best, pound-for-pound fighter on the planet at the time and had set himself the unprecedented goal in modern boxing of reaching 100 fights without defeat. Nobody was tipping Haugen to ruin that feat. The only threats to this appeared to be the WBC light-middleweight champion Terry Norris, at a catchweight, and IBF light-welterweight champion Pernell Whitaker.

Traditionally a slow starter, Chavez was determined to avenge the challenger’s disrespectful comments in the build-up and set about battering Haugen all over the ring from the very outset. After dropping Haugen to one knee, Chavez drove in a number of hard lefts to the challenger’s right side followed by a left-right to the head and another right-left to the face and body. A further right cross shook Haugen just before the bell but the challenger bravely closed the round with a left hook to Chavez’s face.

The punishment continued into the second round, only this time Chavez took his time dishing out this harsh lesson. The left hook remained his main weapon and the champion ended the round with a painful right-right-left-left combination which again had Haugen in trouble.

The challenger briefly made Chavez take a step back in the third with a good right cross, but the champion’s campaign of hurtful body shots continued to wear Haugen down. Chavez employed the uppercut in close in the fourth round and a defiant Haugen even had words with the champion after the bell.

Chavez emerged from his corner in the fifth determined to finish the contest there and then. A stinging left jab followed by a hard right cross wobbled Haugen on the ropes but the champion was not finished punishing the challenger just yet. Two rights to the head and another left hook to the body dropped Haugen to one knee and although he rose at the count of six he soon found himself locked in Chavez’s corner where the champion destroyed the defenceless Haugen under a barrage of blows.

“He deserved to be punished like this. He said some bad things and he deserved this. Now you know I don’t fight with taxi drivers,” said Chavez. Comically, Haugen replied: “They must have been tough taxi drivers.”

In Boxing News’ review, Daniel Herbert stated ‘if personal and national pride were not enough, Chavez had another reason to batter Haugen; he had bet $100,000 with Don King that he would win inside the distance. Assuming King pays up – and that must be the biggest “if” in boxing – then Julio Cesar Chavez would be the first boxer to make money out of Don King rather than the other way round’.

On the undercard, ‘Terrible’ Terry Norris destroyed Maurice Blocker inside two rounds to increase the calls for a clash with Chavez. However, a fight between the two never materialised and within a year both men would suffer defeats, Chavez dropping a split decision to Frankie Randall and Norris being stopped in the fourth round by Simon Brown.

More ON THIS DAY articles HERE