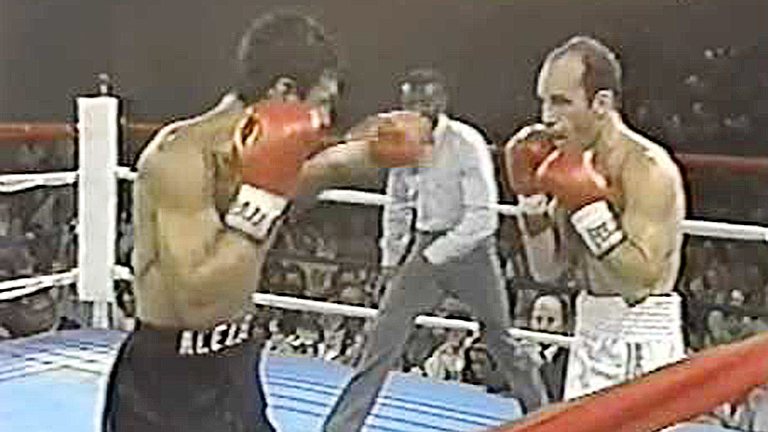 ALEXIS ARGUELLO, the WBC lightweight champion, was an incredible fighter. And in the summer of 1982, the spidery assassin was plotting his next move. Ultimately he wanted a multi-million dollar showdown with light-welterweight leader Aaron Pryor but first he had to prove he could perform at light-welterweight. Enter 140lb fringe contender, Kevin Rooney, who challenged the Nicaraguan on July 31 in Atlantic City.

ROONEY was a welterweight, had won 19 out of 20 bouts, and only lost to future light-middleweight champion, Davey Moore. He hailed from the Catskills gym in New York where he trained under Cus D’Amato.

THE televised bout was set for 10 rounds, and Pryor – who had seen projected fights with Ray Leonard and Thomas Hearns come to nothing – was ringside hoping to secure a fight with a marquee name.

ROONEY began with the upset in mind and stalked Arguello and landed the occasional right. But the Nicaraguan, a master counter puncher, connected with more in the opening round.

ARGUELLO’S left jab slammed off Rooney’s nose in the second round. As blood trickled, the underdog’s body was targeted by slashing left hooks. The New Yorker kept trying to edge forward, but each step, and swing, was being punished.

THE calculating Arguello had been having some success with his right, and Rooney was struggling to avoid it. He jabbed, closed the distance and loaded up on another right. It crunched off Rooney and sent him to the mat.

BRIEFLY he tried to rise, but it was clear he was not going to make it. As referee Larry Hazzard waved his arms to signal the fight was over, Rooney placed his head back on the canvas. His eyes were misty, his body heavy. It was an emphatic, and destructive finish.

“I LEARNED one thing,” said Pryor from ringside. “I learned that Arguello can punch at the heavier weight.”

IN NOVEMBER that year, Pryor and Arguello engaged in epic warfare, eventually won by the former in the 14th round.

ROONEY, meanwhile, went on to guide Mike Tyson to the world heavyweight title.