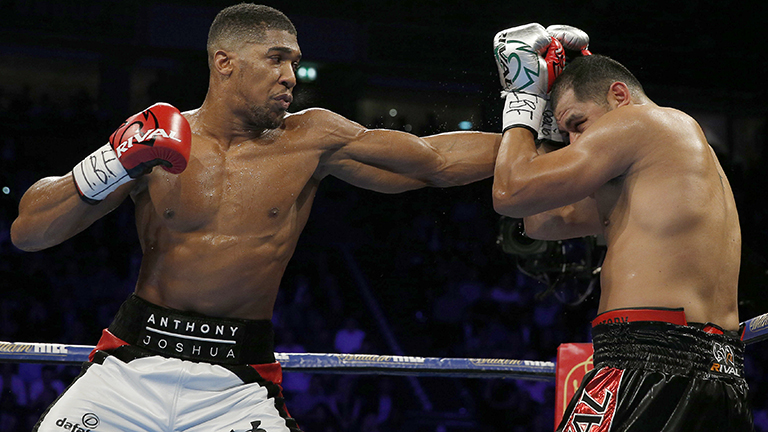 When Anthony Joshua blasted through the last barrier between himself and Wladimir Klitschko. John Dennen reported from ringside at the Manchester Arena

ERIC MOLINA stood between Anthony Joshua and some of the biggest fights in the sport. But there was no chance that Joshua was going to let this challenger block his path to Wladimir Klitschko. Anthony defended his IBF heavyweight title, demolishing Molina inside three rounds and then confronted Klitschko in the ring at the Manchester Arena, announcing that he would fight the division’s old ruler on April 29, 2017 at Wembley Stadium.

The prize waiting for Joshua gave this fight with Molina an element of tension, given how much hinged on this result. But the American was a tame challenger. Eric had said beforehand that he was training for one thing and one thing only, to land a knockout punch. However, looking for a single shot did him no good. Anthony’s feet were faster, his hands much too quick for the American. Only at the start of the second round did Molina start to throw his right hand with real intent, countering off the ropes. But Joshua would not let him connect.

The Londoner boxed with his gloves up, unhurried, his guard tight. He was up on his feet, moving his upper body, stepping clear out of range, catching Molina’s offensive efforts on his arms or elbows. His work was crisp and clean, the jab disrupting Eric’s guard. He threw his backhand right straight and, for the most part, accurate.

In the first round, after establishing his jab, Joshua looped round a languid left. He threw it easily but Molina felt the pain. The pressure was getting to him, pulsing from a raucous crowd and from having a bigger, faster, stronger man tracking cooly after him.

Joshua seized the centre of the ring right from the start in the second round. His left hook teed up a heavy right cross. He looked to connect as Molina stepped in. The IBF titlist screwed up a vicious left and Eric had to back off hastily.

Anthony lined up long crosses in the third round. The right hand shot through Molina’s guard. The American jabbed back and heaved a right hook at Joshua’s body. It did not disrupt the champion. He hit in his right and another left cut through. Molina held him in a clinch, trying to keep himself in the fight. But it made his distress abundantly clear to Joshua. Anthony ushered his victim to the ropes. He towered over Molina in this moment and he plunged his right hand straight down, like a matador slamming a broadsword into the neck of a disorientated bull. The strike flung Molina down, his head held up only by his own cornerpost. Joshua stood over him, poised, the stance accentuating the impact of that single shot.

Astonishingly Molina made it to his feet, showing some reserves, but he was in a poor state. At once Joshua stepped into range and fired in three swift left hooks that left Eric Molina flopped over the top rope, with referee Steve Gray waving it off at 2-02 of the third round.

To earn this shot Molina had beaten Tomasz Adamek in Poland and competed with WBC champion Deontay Wilder on his way to a stoppage defeat inside nine rounds. But with controlled power Joshua destroyed the American, seemingly at his leisure. “It’s my job to make him look easy, isn’t it?” the Englishman said. “We’ve seen what he can do, we’ve seen what he can’t do so you’ve just got to find your way. No fight’s easy but we trained properly. We definitely trained properly.”

It was the perfect way to announce his showdown with Klitschko. Wladimir himself climbed into the ring, spritely for a 40 year old veteran of 68 fights. Although the two faced off for the cameras, Klitschko greeted Joshua with almost avuncular cheer, referring to watching Joshua win his Olympic gold and the close eye he had kept on Anthony as a professional. The old champion took the microphone to cheerily address the Manchester crowd. “You want it?” he cried out, in the unfamiliar role of entertainer. “You got it!”

“To see Klitschko here tonight, this makes it real and we can focus on that now and look forward to a big 2017,” Joshua said afterwards. “I think we’ve both got that mutual respect and it’s more about boxing.” But he adds, “We’re all predators.”

“When we’re in the ring it’s competition and the best man will be victorious. I think we’re very clear in the respect level but very competitive on the competitive level as well,” he continued. “I need to improve another level and I’ll probably do that throughout my next camp. I hope I get the win. April 29, hopefully I can go out there and defend the title once again.”

But surely, beneath the cheery demeanour, in Klitschko there is a steely determination to win back the titles he views as rightfully his. Wladimir must want to restore the control he’s exerted over the heavyweight division for the last decade. But the arrival of Joshua at the top tier could herald the start of a new world order. Anthony Joshua versus Wladimir Klitschko is the fight we’ve been waiting for.