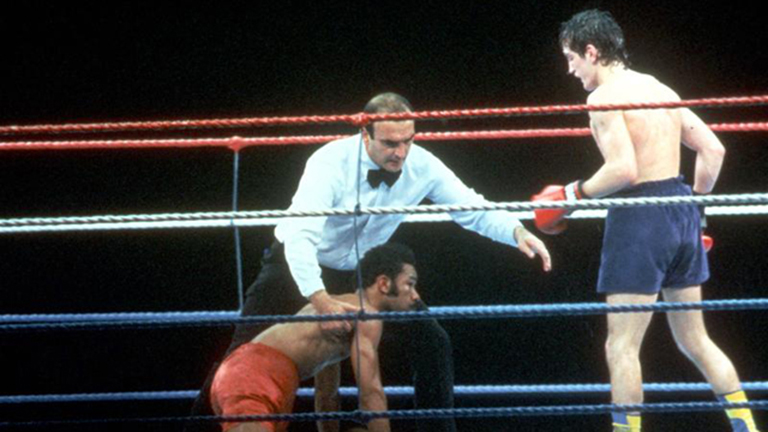 BARRY McGUIGAN transcended the sport during his tenures as British and world champion. In 1985 on June 8 a crowd of nearly 26,000 packed out Queens Park Rangers’ football stadium, Loftus Road to see McGuigan capture the WBA crown.

The front page of Boxing News hailed it ‘His finest hour’ and dubbed it “the finest performance in a British ring since Turpin beat Robinson in 1951”:

Few stadium fights live up to their lofty billing, but McGuigan’s usurping of world featherweight champion Pedroza in front of thousands of baying fans in Shepherds Bush was unforgettable.

On “one of the most memorable nights in British boxing history,” McGuigan not only outpointed the gifted Panamanian over 15, he dominated him. After the frenetic clash, Pedroza threw his arms around McGuigan, who had just ended his seven-year title reign, and said: “You will be a great champion.” He was spot on.

McGuigan fought with an “insatiable desire for victory,” which implored our man at ringside, the legendary Harry Mullan, to compare the Irishman to the great Henry Armstrong. In fact, Mullan dubbed it the finest-ever performance by an Irish fighter – that it can still hold that mantle today is testament to Barry’s brilliance on the night.

Mullan wrote: “Of all the millions of words generated by this magnificent championship fight, the truest and most heart-felt were surely those uttered by Eusebio Pedroza immediately after the final bell. The veteran Panamanian threw his arms around Barry McGuigan, the man who had just ended his seven-year title tenure, and told him, ‘You will be a great champion’.

“It was a measure of Pedroza’s own worth as a champion that it took a challenger as gifted as McGuigan to end his reign. The Irishman’s victory was overwhelming, by margins of 1o points on two cards and seven on the third, but Pedroza’s skill, spirit and dignity in defeat helped make this one of the most memorable nights in British boxing history.”

McGuigan’s right was a key weapon, and he dropped the champion with it in the seventh, after a closely-contested opening six rounds. It proved he carried the power in the fight, and Pedroza knew it.