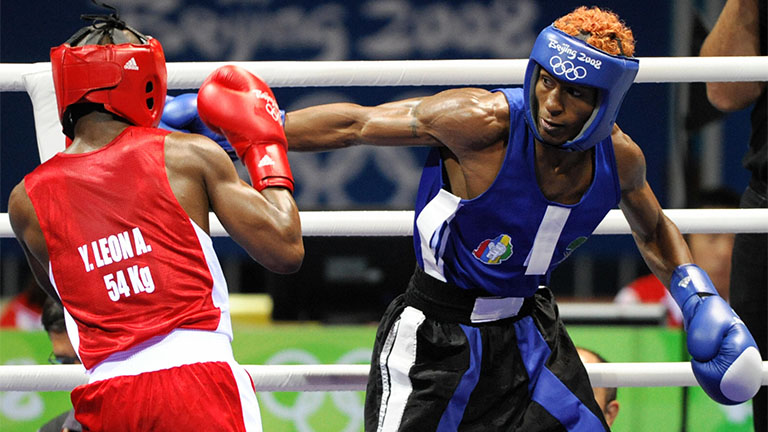 It isn’t always boxers from the more celebrated amateur boxing nations who win medals at the summer Olympics. Join me and in no particular order, meet some of those from across the globe who have done themselves and their countries proud. None of them were probably expected to medal at their particular Games; but they did and every success to them for doing so. They deserved and enjoyed their times of Olympic glory. Let us now reflect on their particular achievements. At the end of this article, we will focus on Croatia and potentially their first ever heavyweight champion of the world.

But we start in South America and in Uruguay in particular. The year is 1964 and the place is Tokyo, we will be going there again next year. A delightfully named bantamweight, Washington Rodriguez won a bronze medal, two years earlier he had secured a bronze at the Latin American Games. He remains the sole medal winner for his country in the Olympic ring.

He boxed and won three times in Tokyo, before meeting the host country’s Takao Sakurai in the semi-final where the Japanese boxer won unanimously, going on to eventually claim the gold medal; the first for his country in the Olympic boxing ring. Rodriguez for his part defeated Cambodian Ek Sam An, then stopped Jaroslav A lajs of the former Czechoslovakia in the third round, before defeating Nigeria’s Karimu Young.

When he left the amateur ranks, Rodriguez had a short undistinguished paid career, culminating in five wins and a debut loss, and later worked in the National Republic Bank of Uruguay. He died at the end of December 2014 in Montevideo aged seventy.

Moving now to the island of Mauritius, we meet a very interesting character and no mean exponent too of the skills of the noble art. Louis Richard Bruno Julie, often known ring wise as Bruno Julie and even in 2010 as Louis Julie; won a bronze medal at bantamweight in Beijing in 2008. This remains the sole medal Mauritius has won at the summer Olympics.

He was a formidable competitor, reaching the Commonwealth Games quarter-final in 2002 and going on to achieve two bronze medals at the Commonwealth Games (2006 and 2010); a gold and a bronze at the All African Games and a gold medal and two silvers at the African amateur championships. A very impressive medal haul by the island’s most famous fighting son. He also boxed in the World Championships in 2007, losing on points eventually to England’s bronze medallist Joe Murray who triumphed 26-19 in a very competitive and lively bout.

In Beijing he had three successes; outscoring Lesotho’s Emmanuel Thabiso Nketu 17-8, Khurshid Tadjibayev of Uzbekistan by 16-4, then Venezuelan Hector Manzanilla by 13-9, before coming up against Cuban specialist Yankiel Leon, in the semi-final, who narrowly outpointed him 7-5. The Cuban later bagging the silver medal.

He remains a remarkable amateur medal winner and his island nation is rightly proud of his achievements in the ring at top international level. They, nor we, will probably never see his like again.

Now it is time to move to Guyana and to meet bantamweight Michael Anthony Parris, known simply in the amateur ring as Michael Anthony. He remains Guyana’s sole Olympic medallist, securing a bronze at the 1980  Games in Moscow. Hailing from Georgetown, he opened with a bye in Moscow, then decisioned Nureni Gbadamos from Nigeria, followed by a tight encounter with Syria’s Fayez Zaghloul, then stopping Mexican Daniel Zaragoza in the second round of their quarter-final. In the semi-final, Cuban legend Juan Hernandez loomed in the other corner and he triumphed before going on to win the gold medal.

After his amateur days were over, he boxed in his professional career as Michael Parris. He had a decent run in the paid game. He won 17 contests (four inside), lost 10 (three inside) and boxed two draws. Although he lost most of his attempts at winning various key championship contests, he retired following a victory over Paul Lloyd in Chester in November 1995, Lloyd retiring in four rounds.

He was a very decent boxer in both codes and an Olympian to boot.

Now we journey to Bermuda and catch up with a heavyweight, the big punching Clarence Hill, who struck bronze in 1976, still remaining his country’s only Olympic medallist.

Hill had a bye in his opener, then knocked out Iran’s Parviz Badpa in the third round of their contest. He then outscored Belgium’s Rudy Gauwe. Semi-final action saw him meet Romania’s tough and very experienced Mircea Simon who defeated Hill. The Romanian was himself defeated in the Olympic final by the legendary Cuban Teofilo Stevenson, so certainly no disgrace there.

Turning professional, Hill won 19 fights (16 inside), lost three (one inside) and boxed one draw. Although he never acquired any titles, he may best be known for his unanimous points loss to Tony Tubbs in 1982. Hill actually floored Tubbs in the opening round.

After boxing, he was beset by some dark times, drugs and prison but subsequently and very happily turned his life around.

Mwila started his Olympic journey with a bye, then he stopped Chung Pao Ming from Taiwan in the second round. Next up Japan’s Mamotu Kuroiwa was dismissed and then the Zambian was derailed by Italy’s Salvatore Todisco  the eventual silver medallist who was unable to box in the final due to a broken thumb; thus leaving America’s Paul Gonzales Jnr the Olympic champion by virtue of a walk over.

Mwila had one contest as a professional losing on points in his debut six rounder and then decided to hang up his gloves for good.

He stopped Ghana’s Odarey Lawson in the third round, moving on to defeat Park Tai- Shik from South Korea who retired at the beginning of the third round. Japan’s Kyoji Shinohara was just edged out by a tight split margin to set up a semi-final clash with Bulgarian Angel Angelov who triumphed unanimously, the Bulgarian becoming the eventual silver medallist, losing a close decision to the American “Sugar” Ray Seales.

No mean amateur, Dabore won silver medals at both welterweight and light-welterweight in the African Games.

I did promise a surprise at the end of this journey and for this we move to the 2016 Games in Rio and focus on super-heavyweight, Filip Hrgovic from Croatia who won his country’s first Olympic boxing medal there. Turkey’s Ali Demirezen was dismissed unanimously; Cuba’s Lenier Pero was then halted in the second round by the heavy-handed Croatian to set up a semi-final clash with Frenchman Tony Yoka. The Frenchman won a disputed “nod” as indeed he did again against Team GB’s Joe Joyce in the final. Both of Yoka’s victories were very controversial and did not reflect good judging by any means. Simply, they damage our sport and should be eradicated. The decisions stood and Yoka became France’s first ever super-heavyweight Olympic champion in somewhat questionable circumstances. The Croatian boxer also won gold medals at super-heavyweight in the European Championships in 2015 and the AIBA Youth World Championships in 2010, so he has plenty of ring pedigree to call upon.

Hrgovic is now making his mark in the professional trade and his record stands at 9-0 (seven inside) and he holds the WBC International heavyweight title and is widely tipped by many in the trade as a likely first ever heavyweight champion of the world from Croatia. He is a very big man and is biding his time just now but could become a very potent force among the heavyweight brigade once the current crop of various champions have left the scene.

We shall have to wait and see on that prediction.