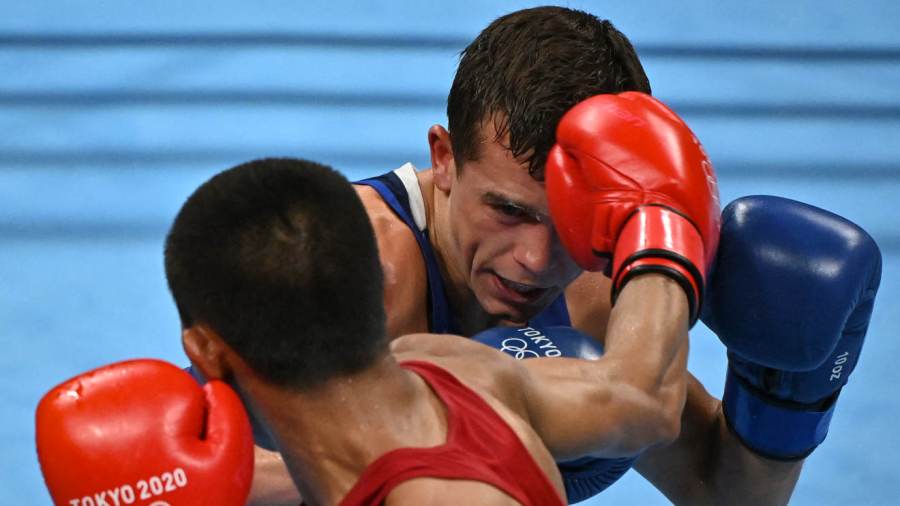 PETER McGRAIL suffered a bitter blow in his first contest at the Tokyo Olympics on Saturday. In the years building up to this event the Liverpudlian 57kgs has excelled, medalling at almost every major competition and becoming one of GB’s star men. But five years of work can hinge on three minutes in this sport. His opening contest at the Kokugikan Arena came against Thailand’s Chatchai Butdee, a skilled and highly experienced southpaw.

McGrail, a quick southpaw himself, got on the front foot in the first round, connecting with his lead right. But Butdee was composed and began to settle into the bout. He whipped shots into the body and clipped Peter with headshots. That first round was close, very close. But when it went to Butdee for all five of the judges it meant Peter had to chase the Thai and the bout. That is a difficult position to be in against a relaxed southpaw who’s confident on the backfoot.

McGrail had to rush himself in the second round, while Butdee could stay mobile and pick his shots. Peter battled back in the third and last round, picking up that round for three of the four judges. But it was too late to wrest the decision his way. Butdee won a unanimous points verdict.

Featherweight Karriss Artingstall had got Britain off to a winning start at these delayed 2021 Olympic Games. Karriss Artingstall made sure of a clear unanimous points victory over Botswanan 57kgs Keamogetse Kenosi. Artingstall planted herself up close and slammed her powerful southpaw cross through Kenosi’s guard and ripped in lead right hooks to both the head and body. Artingstall was making using of her heavy punch-power and wasn’t as mobile as she can be at her best. It meant Kenosi could swing back with her own hooks, catching Artingstall on occasion. But it was never enough to shake off Karriss’ control of the bout. Kenosi was disrupted more and more, lost her footing and her composure, as she tried to wrap up Artingstall in clinches. The Briton took every round for all five judges.

“I am excited for the Games, I am in really good shape both mentally and physically. In my previous tournament, I wasn’t prepared mentally whereas here I am,” Artingstall said afterwards. “It is one of the best events I have been to, regardless of whether there is anyone here. But me hearing my Team GB teammates at the top is just what you need when you’re in there alone.

“I am cool, calm and collected and relaxed. All I need to do is switch on from that first bell and I am capable of beating all of these girls here.”

Ireland’s Kurt Walker started sharply against Spain’s Jose Quiles Brotons, darting in and out, moving lightly on his feet and landing jabs and rapid left hooks. He was in control of the contest and despite the judges giving the Spaniard the second round, Walker didn’t let that rattle him. He forced his way forward in the third, firing through blasting hooks to ensure the round and the bout went to him on a unanimous decision.

American featherweight Duke Ragan, who has been brought back from the professional sport, was fortunate to get through his opening contest against France’s Samuel Kistohurry. Ragan landed quality combinations when he could but the Frenchman rushed him, swarming over the American and clubbing at him with hooks. The workrate Kistohurry sustained however did not persuade the judges who awarded Ragan a split decision.

Croatia’s Nikolina Cacic eliminated Ragan’s US team-mate Yarisel Ramirez in the women’s featherweight division. Their contest was in the balance until the last round, but the Croatian fired in firm straight shots as Ramirez tired, securing a unanimous decision win.

American welterweight Delante Johnson overcame Brian Arregui on a split decision, but he had to recover from a heavy knockdown in the second round. The Argentine swung a perfect left hook into his jaw, depositing Johnson on his knees. But he picked himself up, conceded that round but got to his boxing in the third, fast, accurate shots and swift footwork getting him through as he edged out Arregui.