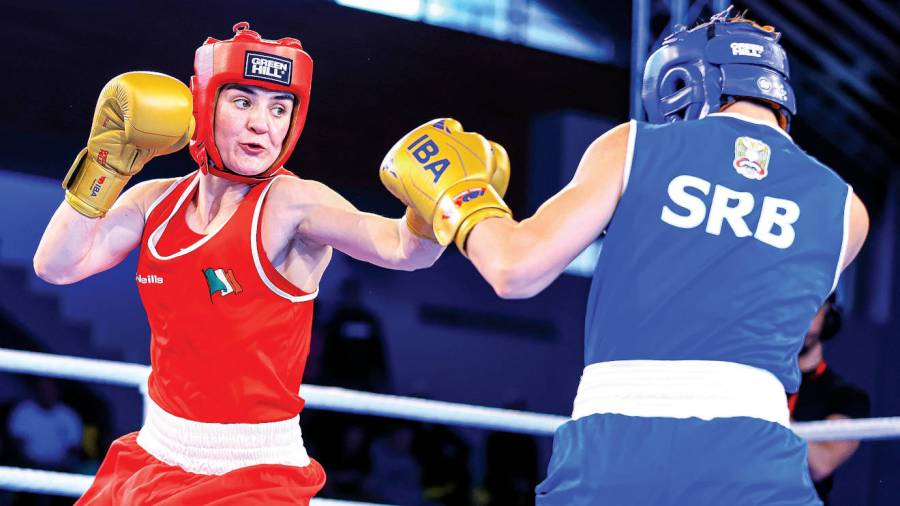 ATER winning Olympic gold at the Tokyo Games last year, Irish lightweight star Kellie Harrington returned to action at the Strandja tournament, which concluded on Sunday (February 27) in Sofia. Harrington would have had plenty of interest from the professional sport but has decided to stay with the Olympic code. She will be one to watch at the major tournaments this year and she won this competition in Bulgaria at 60kgs.

She began her tournament against Agnes Alexiusson, beating the experienced Swede on a unanimous decision. Harrington then defeated two Kazakh opponents, Aidana Zabynbekova and Rimma Volossenko, winning both the quarter and semi-final on unanimous decisions too.

That put Harrington into the final, her fourth bout of the week, against Serbia’s Natalia Shadrina.

On the balls of her feet Harrington fired out rapid jabs before uncorking a solid right cross. Shadrina felt that shot. With ease the Irishwoman turned southpaw and continued to pop in shots. The Serbian powered onto the inside, leading with her back hand right.

In the second round Harrington pivoted round her to land long, straight shots. She caught her out with a cross, disrupting the Serbian’s rhythm. Sadrina maintained her determination in the final round. Harrington stood to trade at times. The Irish boxer was craftier, covering up to block punches before opening up with hooks. Kellie landed some big shots before the session was done, winning yet another unanimous decision.

Harrington’s team mate Aoife O’Rourke was another good gold medallist in Bulgaria. She met fellow Tokyo Olympian, and former World gold medallist, Panama’s Atheyna Bylon in the 75kgs final. O’Rourke worked in a right cross, active from the start. She feinted, bouncing forward and back before launching another cross through. It was the shot to use against the Panamanian southpaw and the Irish middleweight continued to power it through the middle. O’Rourke even doubled it and jabbed to the body.

Bylon lashed hooks back at O’Rourke in the second round. But Aoife didn’t neglect her work and continued to thump in rights, handing Bylon a standing count before the end of that session. The Panamanian, tiring as she looked to counter O’Rourke, could not recover the deficit in the final stanza. Aoife still persisted, continuing to land shots of her own and winning a unanimous decision.

That result concluded a great run through the tournament. O’Rourke had begun the competition with a two-round stoppage victory over Greece’s Vasiliki Stavridou. She then outscored France’s Davina Michel, taking the win on a unanimous decision, before meeting Russia’s Anastasiia Shamonova. That was a fine victory for O’Rourke too. Shamonova is the European under 22 middleweight champion was a World Youth gold medallist in 2018. O’Rourke secured a unanimous decision win.

There were no medals for GB boxers in this tournament. But Tokyo Olympian Charley Davison made her return to action. She picked up a good result in her opening bout, beating Russian flyweight Elena Saveleva, a highly experienced international medallist, unanimously. Indian 52kgs Nikhat Zareen however outscored Davison in her second contest in Bulgaria, taking a unanimous points verdict. Zareen had good tournament, beating an Olympic silver medallist, Turkey’s Buse Naz Çakıroğlu and then Ukraine’s Tetyana Kob to win the Strandja gold.

GB 80kgs George Crotty had three bouts in the competition. He beat Ukrainian Ivan Sapun and then Spain’s Jalidov Gafurova on split decisions before Uzbekistan’s Odiljon Aslonov eliminated him from the competition on a split. “It felt good to be back in there. Three good fights last week. Setting up nicely for a big 2022,” Crotty said.

There are many more tournaments to come this year and some of the GB male boxers hoping to have a say in them were in action at the Strandja. Niall Farrell moved up to 60kgs but Vassiliy Samchuk pipped him on a split decision. Flyweight Kiaran MacDonald also lost to a Kazakh opponent, with Damir Abdikadyr taking a unanimous decision. The Kazakh team took another win over Britain when Kuan Kuatov outscored Harris Akbar on a split at 71kgs.

Lewis Richardson continues to gain international experience. He boxed Russian middleweight Pavel Sosulin, who outpointed him unanimously. The Russian went on to the final. There he met Tokyo Olympic silver medallist, Ukraine’s Oleksandr Khyzhniak. The Ukrainian was typically ferocious, marching up close to hammer Sosulin back with hooks, driving him into the ropes and slugging through hard shots to win a unanimous decision in another high-octane bout.

The Strandja is a long-standing tournament on the European circuit, receiving further attention as part of the ‘World Boxing Tour’ that IBA, the world governing body, is launching. The 2022 version was a large one with 368 athletes competing overall.