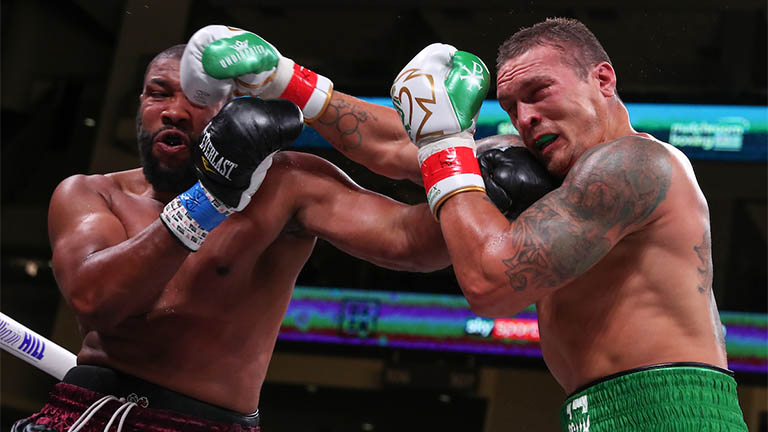 FORMERLY the undisputed cruiserweight champion, Oleksandr Usyk has stepped up to heavyweight. In his first bout in the division he picked apart American Chazz Witherspoon on Saturday (October 12). Battered and beaten after seven rounds at the Wintrust Arena in Chicago, Witherspoon slumped on to his stool and could not continue against the excellent Ukrainian.

Witherspoon had come in as a short notice replacement in the days ahead of the fight after original opponent, Tyrone Spong, failed a drug test.

“I think it was a good performance by me. Most important I did everything I was told by my corner,” Usyk said afterwards.

Usyk is an exciting addition to top level heavyweight division. His skillset is superb and he would be a fascinating opponent for any elite heavyweight whether it be Deontay Wilder, Tyson Fury or the winner of Anthony Joshua and Andy Ruiz. The only question is whether he can contend with the power and size of the big heavyweights. But against Witherspoon Usyk certainly looked the part.

He said, “Basically the difference between cruiserweight and heavyweight is the dynamics, the speed. I felt if a punch was landed, maybe on the shoulder, I can tell this guy weighs a lot.”

It seems like Usyk will enforce his position as mandatory challenger for the WBO heavyweight title, one of the three belts Joshua and Ruiz will fight for in December. Speaking of his next target, Usyk said, “If it was up to me, it probably would be the winner of Joshua-Ruiz.”

On the undercard Dmity Bivol won a unanimous decision over 12 rounds to defend his WBA light-heavyweight from Lenin Castillo.

In a fight for the WBC and WBA super-lightweight titles Jessica McCaskill won a majority decision to beat Erica Farias.