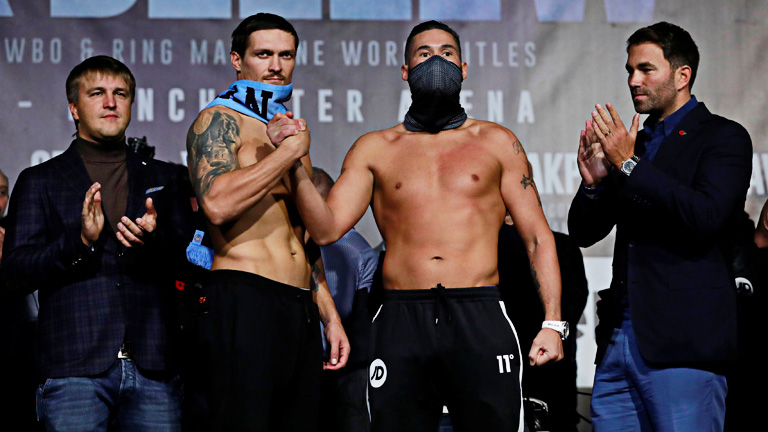 The pair weighed in at Manchester Central this afternoon (Friday November 9) in front of a packed, boisterous crowd.

Usyk – with a Manchester City football scarf draped over his mouth and shoulders – and Bellew – with a snood covering the bottom half of his face – engaged in an intense close-quarters face-off afterwards, before respectfully shaking hands and embracing.

Bellew then strode to the centre of the stage and pounded his chest, passionately bellowing, “Come on!” to those in attendance.

Usyk responded by raising the flag of Ukraine, which led to boos from Bellew’s supporters, but chants of “Usyk, Usyk” from the vocal contingent of travelling Ukrainians.

Bellew said post-weigh-in: “I feel fantastic. Fat boy is in shape! Usyk is in the deep end. Tomorrow night, there will be war. He’s a formidable champion – one of the pound-for-pound kings of the world. We’re going to create madness tomorrow night.”