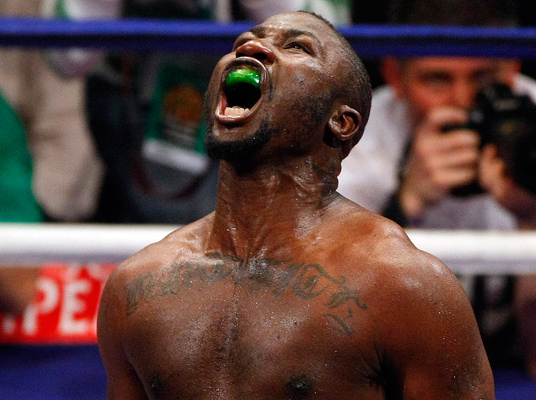 British-born cruiserweight Ola Afolabi gets another crack at a 200-pound title on December 6, when he faces Cuban southpaw Yoan Pablo Hernandez for the IBF crown.

Currently 20-3-4 (9), the tough and talented Ola Afolabi, who has waged war with WBO cruiserweight boss Marco Huck three times, says he thinks this will be his last world title shot and plans to make the absolute most of it.

Q: Great news for you, Ola, another world title shot and it’s back to Germany for you?

Q: You probably know a lot about Yoan Pablo Hernandez, who some say is the world’s best cruiserweight after your three-time foe Marco Huck. How do you rate Hernandez?

O.A: “He’s a good fighter, no doubt. He’s not as tough as Marco Huck, but he’s a better thinker. But we’re ready for him. I started training on Monday (October 6) and the date being floated around for the fight is early December. That gives me around nine weeks and that’s perfect for me.”

Q: Did you see Hernandez’ last fight, against Firat Arslan (w split pts 12) – he got some criticism for that performance.

O.A: “Yeah, he lost that one. He got a gift. Another gift in Germany.”

Q: He seemed to run out of gas in the later rounds.

O.A: “Well, he [Arslan] has that style, that style where he smothers you and makes you work and makes you tired. He did that to Huck and I think he won that [first] fight, too.”

Q: Plenty of people say you are the best cruiser in the world without a major belt. Is this the fight where you finally get one around your waist?

O.A: “I hope so. This is probably my last title shot, my last hurrah, so I have to make it count. I do have high hopes for this fight. Whatever he [Hernandez] wants to do in the fight, I’ll be ready for him.”

Q: He is quite a tall guy and he has a couple of inches of reach advantage over you and of course he’s a southpaw. Any concerns there?

O.A: “Not really. As you know I’ve been working with heavyweights and taller guys my whole career; the Klitschkos (who Ola has sparred many times). Actually, I think Hernandez is about the same height as me, maybe he has an inch or so over me, no big deal. He’s a good counter-puncher and he’s a Cuban after all, a good amateur who beat [Odlanier] Solis in the amateurs. He’s fought naturally big guys. He is a good fighter.”

Q: Not to look past Hernandez, but what are your plans if you do finally win the big one? How long do you plan to box on for at age 34?

O.A: “There are two ways I can go if I win: that’s to go to England to fight, and fight the [Tony] Bellew-[Nathan] Cleverly winner. Or I can go to Russia, where they have the WBA champion (Denis Lebedev) and the WBC champion (Grigory Drozd), and I could fight a unification fight. So a win [over Hernandez] would be huge for me and it would open a lot of doors. But first things first and I have the fight with Hernandez, and he is not a fighter to overlook.”

Q: He is a dangerous puncher, as he showed in the two fights he had with Steve Cunningham, yet he has been stopped whereas you have never been stopped. Could it be a slugfest in December?

O.A: “Like I say, I’m ready for whatever he brings. I had three hard fights with Huck and if this fight goes that way, it will be good for me. If he comes out aggressive in the early rounds, that’s okay with me. But at some point in time he will revert back to his natural thinking style. You can’t change the nature of the beast.”