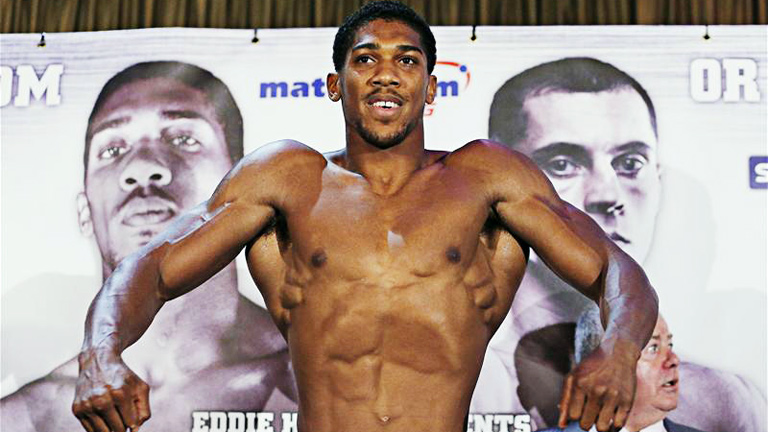 DRIVEN perhaps by a simple lack of knowledge or even more sinister motivations, a growing number of people are perpetuating rumours regarding Anthony Joshua’s impressive physique, several inferring that it has not been achieved naturally. These frequenters of forums and social media platforms have at least been given something to think about by Mark Ellison who, as Joshua’s nutritionist and a long-time friend of the Comonwealth heavyweight champion – who meets arch-rival Dillian Whyte this Saturday – has genuine insight into Anthony’s level of discipine. Presented with the slurs regarding Joshua’s body, Ellison defended the practises of the boxer and his team.

“I’ve been working with Josh since 2010 and this guy is a real athlete,” Ellison told Boxing News. “He’s done decent times on the track and fancies himself as a bit of a footballer in the past, before boxing. I hear people talking about how his body has changed since he turned pro but we’ve got stats on body composition and nothing major has changed, plus he’s a man now. If you look at his S&C work you’ll see much of it is speed, power and agility-based; you don’t often see this guy lifting heavy weights.”

Ellison works with Joshua regularly and yet is still constantly astounded by the heavyweight’s dedication and commitment.

“Anyone should spend a day in his shoes,” remarked the nutritionist for the GB amateur squad and Manchester United FC. “I’ve worked with a lot of top athletes but the effort he puts in, not only in training but his sleep, recovery, nutrition and lifestyle – it never fails to impress me. I’m amazed at the professionalism from him.

“As amateurs , when everyone would leave the gym, Luke Campbell, Anthony Ogogo and Josh would be there for hours, doing the ‘boring’ things not everyone thinks are important, things like the exercises for their hands the physios recommend, pre-hab stuff. You look at the physique of Josh, Luke, Carl Froch, all the athletes we work with and they are the same. We believe in clean sport and take our responsibilities to these athletes seriously, putting a lot of effort into the planning of a food-first approach to nutrition, with the few supplements we do use being rigorously tested.”