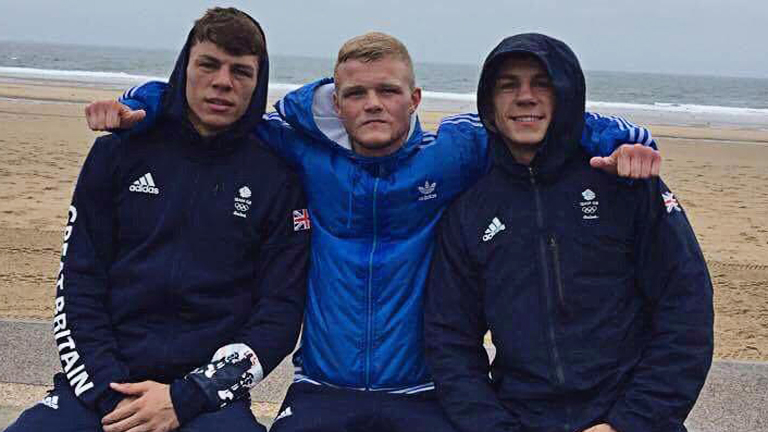 IT is a special place. They do train hard at Birtley. The work is serious. In a wide hall, with rings set up at either end, boxers move round one another. They fire out complex combinations, using their gloves as pads for quick technical work. The coach Graeme Rutherford barks out directions. To the untrained, these instructions are hard even to follow, yet the boxers respond quickly, their hands, the footwork all moving fast.

Eventually the boxing session finishes but they go straight into strength and conditioning. After what would appear to be more than enough work for one day, they move on to the football pitch alongside the club. They run round the paddock, Rutherford has them sprinting in bursts before slowing to a jog, varying the pace for lap after lap.

This is just a sample of what the Birtley boxers go through. The club has undoubtedly got results. On the British Olympic team in Sheffield, Birtley has three boxers at 63kgs alone, two at welterweight, as well as Mark Dickinson at 75kgs and more. However, there’s not only the dramatic success at the top end of British boxing, Rutherford has had champions from Schools level all the way through Junior to the Elites.

He is “completely strict,” Calum French, one of Birtley’s GB boxers tells Boxing News. “It’s what you need really. He’s always picking up on your faults,” he continues. “His knowledge and his drive to be a better coach is amazing to see.

“Even to this day when Graeme trains you, I feel like I want to impress him all the time, I want to do well for him because I know how much time and effort he puts into it, and gets nowt from it. He’s been not just a boxing coach to me through the time that I’ve known him, he’s been like a life coach as well.

“The amount of champions that he’s had, the only coach in England who has had more champions than him is Micky May and obviously Micky May, God rest his soul, he was that good of a coach they named the trophy after him in the ABAs.”

Cyrus Pattinson, another from the club to progress to international competition, recalled how when he first arrived, “I was at the bottom of the list, least credentials, least done anything, getting punched about in sparring and it was hard. It’s a hard environment to be in because it doesn’t make you feel good… You’re just getting absolutely pinged day after day. But if you want to stay in that environment you get better and I think that’s just the way it is. The group that we’re in, we all kind of bounce off each other and we bring each other on really. It’s a good environment to be in.

“You see these young kids as well, not just our generation but maybe the next two or three coming through, you see kids that are like nine and 10-year-old doing it [throwing the required combinations]. You just see all the kids doing it, with no bother and they’ve got the whole session absolutely mapped out. So there’s some exciting times to come through from the North East I think.”

Rutherford made a singular change to Pattinson. Cyrus had come to Birtley as a 17-year-old who’d already had some success. But Graeme had seen something. He insisted Pattinson make a switch and retrain as southpaw, where he had always previously been an orthodox boxer. A big call for him and a painstaking process, but it paid off. Pattinson reached the final of the senior ABAs, then won the Tri Nations and the GB championships and won his place on the Olympic squad.

Stand out internationals, twin brothers Pat and Luke McCormack have excelled at Birtley. Mark Dickinson is another promising talent who could be a star in future.

“I think there’s no secret you know. I just think it’s hard work. Giving everybody a chance, a fair chance and the rest’s up to them,” Rutherford told Boxing News. “There are some good people in the gym. Some very good people in the gym and everybody’s just here to help the boxers. There’s nobody here for themselves.”

“Whatever they want to do in life, whether that be through boxing or through learning it’s about work ethic and life’s going to kick you up and down sometimes, but you’ve just got to keep going,” he continued. “It’s not just about succeeding in the ring, it’s about succeeding in life. And I think boxing is a good leveller because sometimes you get kicked in the balls with it and you’re lying flat on the floor, but you get back up and you realise it’s not just me this happens to. It happens to other people. I’ll dust myself down and get on with it and stop feeling sorry for myself.

“I think we’ve been lucky with some of the kids that we’re getting in. I think they’ve bought into the work ethic. You’ve seen this morning how hard we expect them to work. A lot of people wouldn’t do that. But these lot do and these lot don’t mind the work. But I keep saying to them all the time, the Russians will train five, six days a week and they’re doing it to survive and doing it to feed their families. So if you don’t put that work ethic in how do you expect to match them and in reality do more than them to beat them?

“I think you get out of life what you put into it. Pubs are full of people who could have made it. But something happened, or this happened, ‘I could have been a champion, but I broke my finger. I could have been a professional footballer but.’ We’ve heard them all, all the stories and that, so it’s all about that work ethic, how hard you’re prepared to work and how far you want to push yourself.”

Rutherford was initially a boxer at the club himself. He never expected to become coach. But once, when the youngsters needed someone to take their class, he stepped in. “I just used to train them. I didn’t have a clue what I was doing but first year I got a schoolboy champion. It sort of evolved from there,” he recalled.

“People see a lot of hardness, a lot of toughness but they don’t see the side of where that kid hasn’t had any clothes, he hasn’t had any trainers, you’ve had to buy him boots, you’ve had to buy him clothes. You’ve had to adopt him basically, you know what I mean and with that as a kid, they become loyal to you and they’ll go that extra yard for you. You’re no different to any other coach in any other club because everybody else does it as well.”

He has also assiduously learned the trade over the years. Legendary trainer Micky May was a good friend to him. He’s also learned from the international coaches he’s met and the foreign boxers he’s observed.

By way of example, in a large gym there is a cluster of only three bags and those go unused. Rutherford doesn’t go in for bagwork. “I worked with a Ukrainian coach and they don’t use the bags,” Graeme said. “Little bits of things you pick up but it’s like put kids on the bags, they get bored, you can’t watch what they’re doing. So we do a lot of drills and technical work, stuff like that. They’re all working together and then one doesn’t get what the other one’s not getting. So everybody gets the same, everybody gets the same opportunity.”

Birtley boxers spar of course, but not too many rounds and when they do spar it’s hard, high quality work.

Rutherford has been watching the Uzbeks closely. “Very, very clever fighters, draw you on to shots, probe for weaknesses and exploiting your weaknesses. But a lot of it’s counter-punching, a lot of it’s making you do stuff you don’t want to do by pressuring you. And obviously there’s a different mindset out there and stuff that you would never get away with over here, like drilling kids for two years on straight shots, stuff like that. You’d never get away with that over here because a kid would just go right, I’m bored,” Rutherford said.

“Over there you’re a hero, a national hero if you’re an amateur star, a national hero, whereas over here it’s sort of ‘well done son but how much money have you got in the bank?’ It’s a different mindset.”

The club itself is a great undertaking. On two floors with an area for weight training and additional rooms as well the boxing hall, it’s like keeping a small school running. They hold shows to bring in funds, as well one to raise money for a charity. Taking youngsters on trips abroad is another expense, but something that’s tremendously rewarding for the boxers. “We regularly take them away to Slovakia, Ireland, stuff like that. Not just a small team, big teams as well,” Rutherford said. “That’s what you have your shows for, that’s what you collect your subs for so the kids can go away not because you can run a building.

“Give them life skills as well, rather than being cocooned up.”

With support from people like Steve Freeman and others, the club is on a stable footing. “Because we’ve been self-sufficient we’ve broke through and we’ve done well for ourselves. So happy days and onwards and upwards,” Graeme reflected.

The club does matter, to its boxers and to the town. Rutherford reflected, “The town through the boxing club is known all over the country, the British Isles, maybe Europe, maybe the world, people know it. I think it gives them a lot of pride. Because there’s not a lot here, is there? I think it does that.

“They were proud at the Commonwealth Games. Obviously the Worlds and all that, people were proud. Because they wear it as a source of pride. But if you do well at the Olympics, get a couple qualified for the Olympics and get a couple of medals at the Olympics, which I don’t think is unreasonable to ask for, it would be good. It would be good and people would be over the moon for it. I think it gives everybody a bit of a perk up as well. It gives people an interest. For that two weeks, they’re living that dream of Olympic glory.