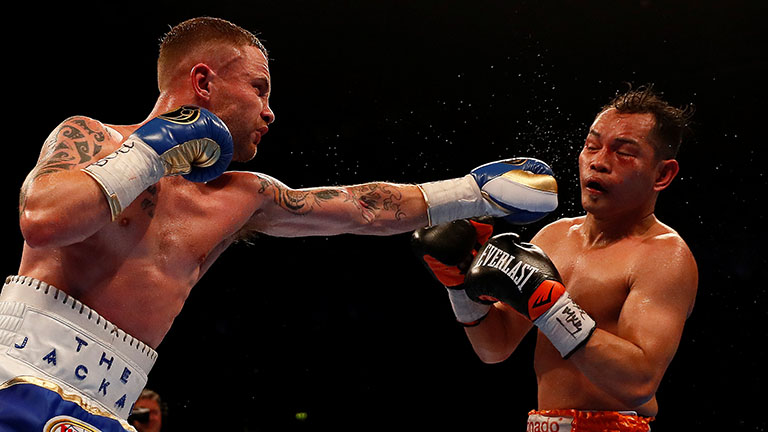 ‘It was like fighting an 140lbs guys in there.’ John Dennen hears Nonito Donaire describe the experience of boxing Frampton in Belfast

IN the 11th round Nonito Donaire landed what should have been his game-changer. His left hook caught Carl Frampton cleanly. It was his power punch. Frampton felt it, but did not hit the deck.

Frampton was tougher than Donaire expected but that did not come as a complete surprise. “Every champion has that granite chin. Especially here, he has the people’s energy. I knew I had to give it all I got with Carl and it didn’t surprise me that he stood there. It didn’t surprise me at all. He’s the champion and that’s what champions are made for. No matter how many times you hit them, they’ll get up,” Nonito said. “Carl just stood there and he just took it.”

What did shock him was the physical size of Frampton at featherweight and the way he switched his tactics throughout the fight. “His footwork was sharp, his body movement. It didn’t surprise me because I knew how he fought. What surprised was the frame and the ability to innovate from the start. Just changing, the first round to the second round to the third round. He was changing style and that’s what champions are,” Donaire said. “Dynamically, physically, he was a lot wider than I thought. So all my set ups couldn’t come in because I had to step double the amount of my movement, instead of throwing that right down the middle, which dropped a lot of the guys in the gym. I was so certain. We were so certain of it. But when we were in front of Carl it was like fighting an 140lbs guy in there. He was so wide. I had to double it up, I had to figure out how to do everything. Instead of going to the right and setting up that right, I couldn’t do it. “

Retirement though is far from Donaire’s thoughts. “I showed what I can do. I can beat my old self. The best man won tonight and that was Carl. Carl was amazing tonight and being there was a pleasure. I’m not bull******* or anything,” Nonito said. “He was great. We came in there with everything that we got and he was better tonight.”

“You can’t end with a guy like this guy,” he added. “If I lost to someone who was nothing then that would be it. I lost to a guy, I gave it all I got, who was incredible and I know that he can beat anybody out there.

“I’ve done everything that I need to do in boxing. I’m just here to be the best that I can be and I can inspire people to do what they can do and have the fun with the guy, who was just amazing. We had done everything in our power to study Carl but he came in there with a variety of styles. It was a pleasure to be in there.”