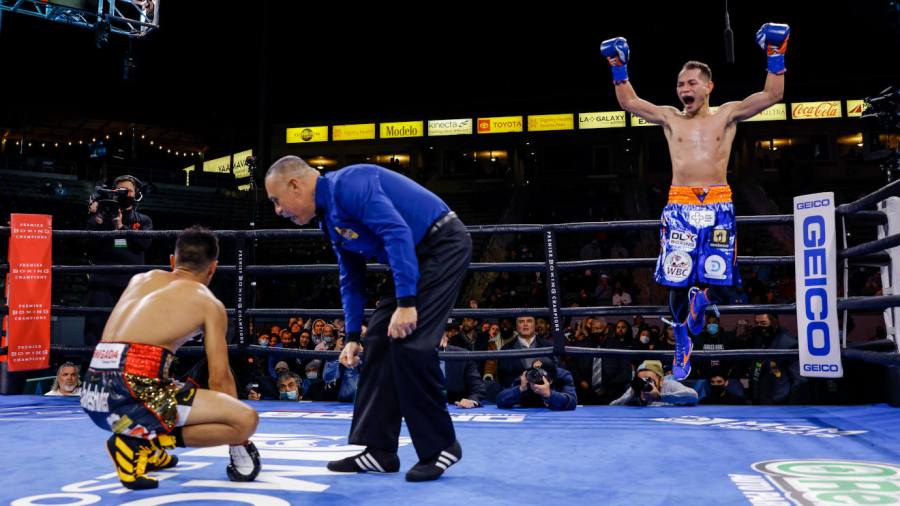 IF there is nothing sweeter in boxing than when the underdog defeats the favourite, then consider that a close second is when an ageing veteran, deep into the winter of his twilight years, gets the better of his younger cohorts. In recent years, the examples of Bernard Hopkins, Floyd Mayweather Jnr, and Manny Pacquiao spring immediately to mind. But the undeniable posterchild for defying Father Time currently is 39-year-old Filipino-American Nonito Donaire, whose left hand is possibly the surest thing in a volatile sport.

At the Dignity Health Sports Park on Saturday, Donaire unsheathed his vaunted weapon in the waning moments of the fourth round of a bantamweight title bout (set for 12) that struck his Filipino countryman Reymart Gaballo – 14 years his junior – to the liver and had him reeling on the canvas. Gaballo managed to beat referee Ray Corona’s count, but he immediately dropped to his knees again, prompting Corona to put a halt to the bout. The official time of stoppage of 2-59.

“My wife and my dad were telling me to go to the body,” Donaire, a native of California, said post-fight. “I had to set it up by bouncing up and down to open up that shot. I was throwing the right hand in the earlier rounds and then he didn’t expect the left hook to the body.

“I thought he was going to get up because I know he has a lot of heart, but that was a tremendous punch that landed,” Donaire continued. “I just told him after the fight not to be down. Because he’s a great fighter. I had trouble figuring him out and I’m here to help him with anything he needs the rest of his career.”

The ever charitable Donaire, who has won belts across four weight divisions, defended his 118-pound strap for the first time since winning it last May against Nordine Oubaali. As with Gaballo, Donaire obliterated Oubaali in the fourth round, courtesy of his left hand.

Gaballo had his moments at times, especially with the uppercut and straight right, catching Donaire as he marched forward. Donaire acknowledged afterward that Gaballo took away his left hook early on, which forced him to rely on straight rights. But Donaire remain undeterred.

“I’ve been in this game for such a long time and I’ve had so many fights, I didn’t think I was going to have to feel him out,” Donaire said. “But he came out differently than I thought he would. He tried to nullify my left hook, but I just had to have no mercy.”

Afterward, Donaire expressed his desire to have a rematch with bantamweight leader Nayoa Inoue, who won a unanimous decision in their barnburner in 2019.

“It’s my team’s job to work on the rematch with Nayoa Inoue,” Donaire said. “I believe my team is going to make it happen. I’m able to keep fighting at this age because I just have faith in myself and have a lifestyle that’s good for me. There is no such thing as a cheat day. It’s a choice day, and it’s my choice to train and to be me.”

In a minor upset, Canadian Cody Crowley outpointed Kudratillo Abdukakhorov in a 10-round welterweight bout. Crowley worked behind his southpaw jab and maintained a high workrate over the relatively timid Abdukakhorov. He was rewarded on the scorecards: 97-92 (Alejandro Rochin),  95-94 (Pat Russell), and 98-91 (Fernando Villarreal).

Crowley encountered a hiccup in the second round, when Abdukakhorov caught him coming in with a left hook that dropped him for the first time in his career. But Crowley was hardly shaken up. In the next round, he started to walk down Abdukakhorov and land punishing combinations. In the fifth round, Crowley connected on a left hand that opened up a bloody cut on Abdukakhorov’s ear. Jerry Cantu refereed.

Hard-hitting junior lightweight prospect Brandun Lee made mince meat over his toughest opponent to date – on paper — to extend his unbeaten record to 24 wins.

The Coachella Valley native of Mexican and Korean descent patiently bided his time for six rounds before he drilled Juan Heraldez with a booming right hand in the seventh that dropped the veteran and prompted referee Gerard White to halt the bout at 2-11. Lee set up the pivotal punch with a one-two to the body, followed by a decoy left hook.

Lee is the managerial stablemate of the dazzling up-and-coming welterweight contender Jaron Ennis.