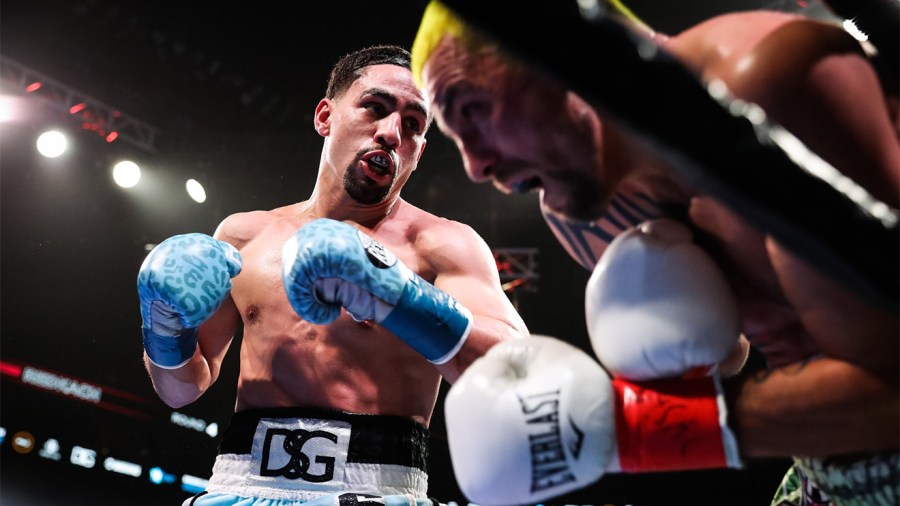 After cruising past Redkach, Garcia needs a big-name opponent next. Sean Nam reports from ringside

DANNY GARCIA may lay claim to being one of the top welterweights in boxing today, but he has struggled nonetheless to stay relevant. He hardly improved his standing at the Barclays Center, where he battered the woefully outmatched Ukrainian Ivan Redkach over 12 monotonous rounds. Vast segments of the crowd, a pro-Garcia contingent that totalled an announced 8,217, began beating a path for exits during the break heading into the final round in what seemed to be a fitting coda to a night of drab proceedings.

With scorecards of 118-110 (Tony Paolillo) and 117-111 twice (Glenn Feldman and Don Trella), the Philadelphian raced away to a relatively painless unanimous points win. At one point late in the bout, Garcia appeared to be on the verge of a knockout, but the knockout, all too appropriately, never came.

“I thought the referee [Benjy Esteves Jnr] was going to stop it,” Garcia said post-fight. “I felt like I was punishing him, but he’s a tough guy. He hung in there. I wanted to get the KO. I didn’t get it. But I felt like I boxed smart till the end. And I got the rounds in. I felt that’s what I needed after a nine-month layoff. Even though I really wanted the knockout bad, I’ll accept this.”

The southpaw Redkach, who was coming off a career-best knockout win over Devon Alexander last year, had no answer for Garcia’s elite counterpunching ability. Anytime Redkach threw a punch, Garcia was right there with a stinging riposte of sorts. Compounding the marked difference in skill between the two fighters was the fact that Redkach was an undersized welterweight; he had spent half of his career fighting as a lightweight. Frustrations boiled over for Redkach in the eighth round, when, during a clinch, Redkach, seemingly out of desperation, tried to sink his teeth into Garcia’s right shoulder. Alas, it was more like a scrape than anything else.

“He bit me. He said, ‘Mike Tyson’, when he bit me,” Garcia said, chuckling. “That’s the first time ever getting bit in a fight. Things happen, though.”

Bites notwithstanding, Garcia has other concerns, like whether or not he stands to fight either Manny Pacquiao or Errol Spence Jnr in a pay-per-view showdown later this year. Post-fight, Garcia reiterated his desire to face either opponent. He also expressed an interest in a rematch with Keith Thurman and in facing Mikey Garcia. Whatever the case, another listless tune-up surely isn’t the answer.

On the TGB Promotions undercard, former WBA/IBF super-welterweight title-holder Jarrett Hurd returned to the ring after his title-losing upset to Julian Williams last year. Hurd made bold pronouncements that he would show up re-invigorated under new trainer Kay Koroma (who also trains WBO featherweight title-holder Shakur Stevenson), but against a natural welterweight in Francisco Santana, Hurd looked largely flat and apathetic.

After operating on autopilot for nearly the entire fight (set for 10 rounds and at a catchweight of 156lbs), Hurd, from Accokeek, Maryland, seemed to wake up in the final seconds of the final round, scoring a knockdown of the game Santana en route to a unanimous decision win.

The fight was perhaps a tad closer than what the judges indicated on their scorecards. Although Hurd landed the harder punches throughout the fight, he was strangely reticent on offence, shelling up for large periods, allowing Santana to tee off with unanswered combinations.

Indeed, though Santana was clearly the smaller man in the ring, the Santa Barbara, California native was the one who pressed the action on Hurd all night long. While he never hurt Hurd at any point in the fight, Santana made it somewhat competitive by outworking his opponent, even it was not terribly effective.

By the time the final seconds of the fight came around, Hurd turned it up a notch, landing a slew of combinations, punctuated by an uppercut that dropped Santana. Where exactly was that energy in the previous 11 rounds?

Philadelphian Stephen Fulton outpointed Arnold Khegai in a closely contested 12-round super-bantamweight bout. The scorecards of judges Frank Lombardi and Waleska Roldan read 117-111, while John McKaie had it 116-112, all for Fulton.

It was a contrast of two styles, with Fulton fighting off the back foot, working the jab, and catching Khegai, a Ukrainian of Korean descent, leaning in with head-snapping counters. It was evident that Fulton’s ring generalship – which included plenty of illegal holding – was frustrating Khegai early on. In the third round, Khegai flipped Fulton over on his back during a clinch. Referee Steve Willis also admonished Khegai for his rabbit punches. Fulton never strayed from the game plan to catch Khegai wading in. Later on in the fight, he began mixing in thudding left and rights to the body. Khegai had his moments as well, especially with the straight fight. Round 11 was Khegai’s best round, in which he reeled off consecutive clean blows on Fulton, but he needed something more dramatic to pull off a win.

The Verdict An uninspiringly easy night’s work for Garcia.