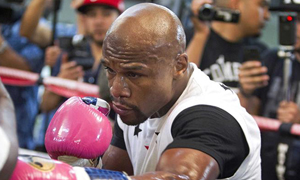 Floyd Mayweather stands by his remarks and insists he's the best ever, writes John Dennen

FLOYD MAYWEATHER, no stranger to controversy, riled many when he argued he was better than Muhammad Ali or Sugar Ray Robinson. But on his conference call this week there was no sign of his iron clad self-belief being punctured.

“I just feel like, like I said before, I take my hat off and then acknowledge all of the past champions. Ali, I think he was a legend. I respect Ali like I respect any other champion. I just feel like I’ve done everything I can do in this sport over my whole life, for 30-something years. I feel like I’ve done just as much in this sport as Ali did,” he said. “There’s no disrespect to him. I just feel like, when you look at it, Ali was great in one weight class, which is heavyweight. But he stood up for a good cause; he stood up for a hell of a cause in his era.

“I think that it’s hard for a guy to beat me. I’m still sharp, still very, very sharp at the age of 38. Still going strong at the age of 38. There’s no disrespect to Ali, as I said before. I just feel like I’m the best, no different from how he called himself ‘The Greatest,’ I call myself ‘TBE’ [which stands for ‘The Best Ever’).”

Mayweather continued, “I couldn’t care less about the backlash. I believe what I believe like he probably got criticized at one particular time when he said that he was the greatest. He felt like he was better than Sugar Ray Robinson. The list goes on and on. I’m pretty sure there’s going to be another fighter that’s going to come along and say he’s better than Floyd Mayweather and he’s going to get criticized.”