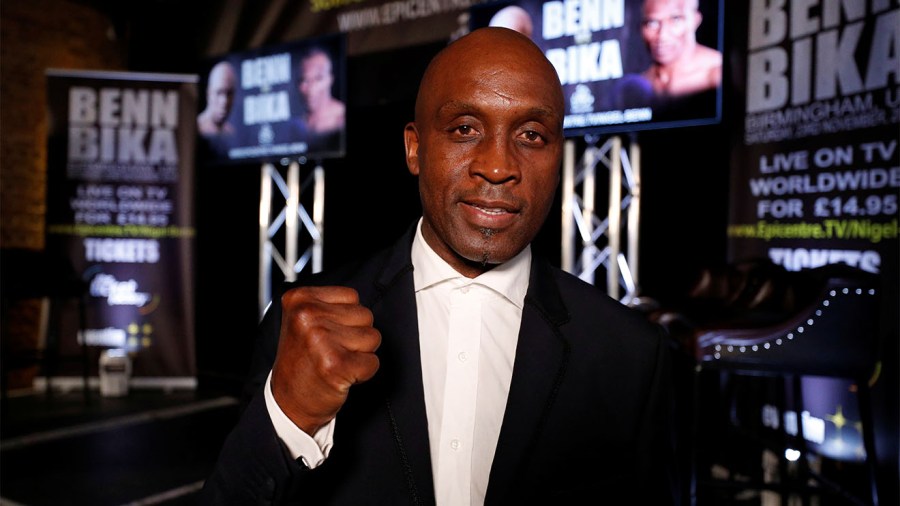 NIGEL BENN has been forced to call off his controversial comeback fight after sustaining a shoulder injury in training.

The 55-year-old had been due to face Sakio Bika in a one-off contest at the Resort World Arena in Birmingham on November 23.

But Benn, who last fought 23 years ago when he lost a rematch to Steve Collins, revealed the bout against Bika is now off.

He told Sunsport: “I have been dreaming of a one-off fight for years and I’m heartbroken I’ve had to call it off.”

Benn’s clash with Bika was to have been sanctioned by the British and Irish Boxing Authority.

Although Benn did not formally apply for a licence to the British Boxing Board of Control, its general secretary Robert Smith indicated there was no chance of his request being considered.

In his prime, Benn won middleweight and super-middleweight world titles and was involved in some of the defining fights of his generation against the likes of Chris Eubank, Michael Watson and, tragically, Gerald McClellan.

Announcing his comeback in September, Benn said: “It is my decision to box again (although may be seen by some as ‘controversial’).

“However, unlike many boxers, I have continued to maintain my fitness and healthy lifestyle since my last fight with Steve Collins.

“I acknowledge the risks associated with the sport, and fully understand the importance of being fully assessed by medical professionals.

“Therefore, I’ve welcomed the requirements of BIBA to clearly establish that I AM ‘fit to box’. ”

According to The Sun, there appears little chance of the contest being rescheduled for a later date.