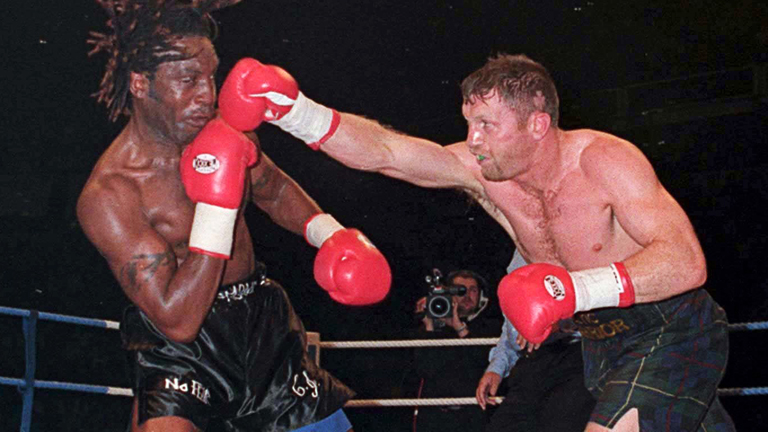 THE British Boxing Board of Control has not received boxer licence applications for Steve Collins or Nigel Benn, and considers a fight between the two “unlikely”.

Collins, 52, and 53-year-old Benn – both former two-weight world champions at middleweight and super-middleweight – have told BBC Sport they have agreed to what would be a third match-up, two decades after their respective retirements.

Robert Smith, the general secretary of the BBBofC, insisted there was no maximum age limit for a fighter but told Press Association Sport: “You’re talking about two gentlemen who haven’t boxed for donkey’s years, but there’s nothing for us to consider at the moment.

“The only age limit we have is you’ve got to be over 18. However, the older you get, the more unlikely it is you’re going to be granted a licence. We haven’t had any applications from Nigel Benn or Steve Collins for a boxer’s licence.

“We’re aware they haven’t boxed for a considerable amount of time, and if we do receive such applications we will have to consider all these matters.

“I’ve not spoken to any promoters. Two weeks ago I had a phone call advising me this was being looked at, but I’ve not received anything from anyone wanting to put it on. I’d be very surprised if any promoter wanted it.

“Anybody can apply for a licence. We’d have to do our job properly and consider any application: whether it gets any further than that consideration I can’t tell you.”

There would be numerous hurdles to overcome, not least a consideration on Collins’ part that when he retired in 1997 he did so on medical grounds, and that a proposed fight against Roy Jones Jr in recent years came to nothing – much like talk of another encounter between Benn and Chris Eubank.

Benn, nicknamed ‘The Dark Destroyer’, retired following his second defeat by Collins in Manchester in 1996 but feels he is now in great shape and wants one more crack at the Irishman.

“I’m not angry any more and I can have everything I ever want,” he told BBC Sport. “I am Nigel ‘Benjamin Button’ Benn. I feel like I am in my thirties. It’s about the final chapter. It’s about closure.

“I was going backwards and forwards with Chris and I thought, ‘I wouldn’t have a problem with Steve’. So I asked him if he wants to fight. He said yes. No mucking about.”

Collins aborted a planned comeback in 1999 after collapsing during a sparring session, and Smith added: “I’m not going to go into his medical history, but he retired at the right time. What should happen is they let their boys [Steve Collins Jr and Conor Benn] go off and forge their own careers.”

But ‘Celtic Warrior’ Collins – who admitted his motivation for wanting the fight was “just about money, a payday which will allow me to buy some more land” – was confident his health would not be a problem, saying: “I am not fighting a 20-year-old-guy. I’m fighting someone the same age as me. There’s no disadvantage to anybody.

“I get medicals every year and the most impressive part is my MRI. ‘Excellent’ was how the neurosurgeon described it. I’m very healthy and very fit.”