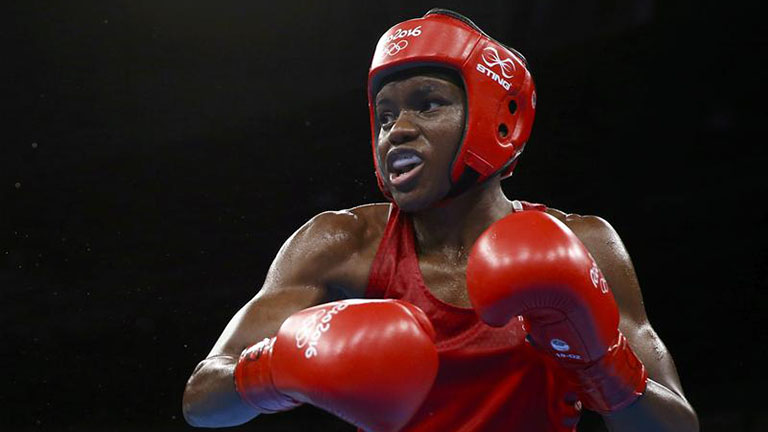 NICOLA ADAMS insists she wants “to take professional boxing to the next level” and follow the routes of former amateur stand-outs Vasyl Lomachenko and Guillermo Rigondeaux.

The two-time Olympic champion has begun preparations for her professional debut, which is scheduled to take place at the Manchester Arena on April 8. Adams has been put through her paces by American trainer Virgil Hunter in San Francisco ahead of the bout.

Although an opponent has not been named, the 34-year-old, who was awarded an OBE in the 2017 New Year’s honours for her achievements in boxing, has further aspirations to shake up the boxing world and change the image of the sport.

Promoter Frank Warren had previously stated his dismay at the idea of promoting female fighters before signing Adams to his boxing stable in January.

Adams believes her legacy in the amateur ranks altered the perception of Warren and others and she hopes to enjoy a similar rise to the top as Ukrainian star Lomachenko and Cuban Rigondeaux.

Speaking at the 2017 Prudential RideLondon-Surrey 46 event to inspire young kids to take up cycling ahead of the 46-mile challenge on July 28, Adams said: “I would love to take professional boxing to the next level, I’d love to be a multi-weight world champion one day, that’s the main goal.

“There’s been a few (fighters I’m aspiring to emulate), fighters of today, like Lomachenko, Rigondeaux, [Gennady] Golovkin, there’s quite a few.

“Just-retired Floyd Mayweather, the likes of Muhammad Ali, Sugar Ray Leonard. I’ve been watching all of these guys, their movement, their placement. I’m just excited, I’m looking forward to it.”

In the professional ranks Adams will campaign at flyweight, a weight class which brought the Leeds fighter aforementioned success as she made history by becoming the first Olympic women’s boxing champion when she captured gold at London 2012.

Having been an amateur for over a decade, Adams is aware of the challenges she may face in becoming a professional but insists she has made the adequate adjustments in training to cope with the transition.

“The preparations are going really well,” Adams added. “I’m training with Virgil Hunter in San Francisco. I’m learning new tricks, settling down on my punches and trying to punch a lot harder, but it’s going good.

“Everything has been the same as normal which I was quite surprised about. I thought there would be more adjustments but it’s really just settling my feet now and land the power shots.”

At London 2012 Adams won gold for Great Britain alongside Anthony Joshua, who has also turned professional. She says she has received tips from the current IBF heavyweight champion on how to approach the spotlight and handle the pressure.

“Everyone has pretty much said the same,” Adams continued. “(They’ve all just told me) to take each fight as a normal bout. It’s going to be the same size ring, judges and an opponent in front of you, and just go for it and get the win.”