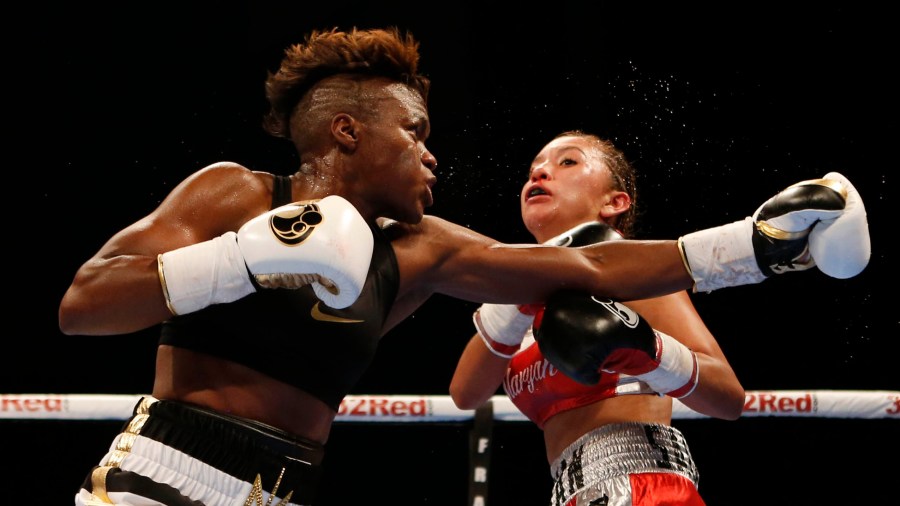 NICOLA ADAMS enjoyed a triumphant homecoming at the First Direct Arena in Leeds as she stopped Mexico’s Maryan Salazar after 35 seconds of the third round of her second professional fight.

The 34-year-old produced a fiery performance which brought roars of acclaim from the home fans, suggesting she is ready to be pushed towards her dream of a world title shot before the year is out.

Relishing her historic debut over three-minute rounds, Adams given a strong test by Salazar, an 18-year-old who arrived in England with five wins and surely little perception of the task that awaited her.

Bloodied but unbowed in the first two rounds of relentless Adams assaults, Salazar was finally stopped from sustaining more punishment when referee Howard Foster stepped in to end the contest after 35 seconds of the third.

But during her time in the ring Salazar showed Adams she will not have it all way as she targets the other Mexican fighters who dominate the women’s professional world title picture at the lighter weights.

Promoter Frank Warren has already identified reigning WBO champion Monserrat Alarcon as a potential future opponent as he aims to deliver Adams a world title fight, potentially before the end of the year.

If Salazar was never going to realistically challenge Adams’ ascent to bigger things, the fact she now has seven paid fights under her belt at the age of just 18 is indicative of the seriousness with which Mexicans regard the women’s sport.

Salazar’s cornermen had been in confident mood from the start as they threw T-shirts bearing her name into the crowd as they waited for Adams to dance her way into the ring.

The ultimate target for Adams may be reigning WBC flyweight champion Jessica Chavez, a 28-year-old from Mexico City who has had 35 fights and fought over the 10-round distance multiple times.

For Adams the important thing is to build up her experience over the longer distance and continue to settle into the three-minute rounds, which are rare and perhaps unique in the women’s sport but clearly suit her style.

Where Adams cut a slightly frustrated figure in failing to dispatch Virginia Carcamo inside the four-round distance on her debut in Manchester last month, she piled on the entertainment in a fight for which Salazar also deserved much credit.

A raucous reception and chants of “Yorkshire” had greeted Adams at the pre-fight introductions and Adams, now going under the professional guise of the ‘Lioness’ appeared to relish the much-improved atmosphere.

To be fair to Salazar, she seemed undaunted by her surroundings and came to give it a go, landing a couple of good shots in a first round which nevertheless clearly went in Adams’ favour.

A left to the body and right-hand combination marked Adams’ best work and as she had predicted, she appeared to settle over the longer stanza and increase her dominance as Salazar tired.

A flashing right at the start of the second landed flush and an uppercut on the ropes jolted back the head of the Mexican, who did well to maintain her composure.

In fact, Salazar began to embroil Adams in something of a slugfest and the Leeds favourite was implored to settle down by her corner as her desire to finish the job threatened to run away with her.

A spectacular end to the second had referee Foster watching closely as Adams backed her opponent into the corner and rained in punches.

And after a similarly frantic start to the third, Foster decided to step in, much to the delight of Adams’ fans, who greeted her victory with relish.