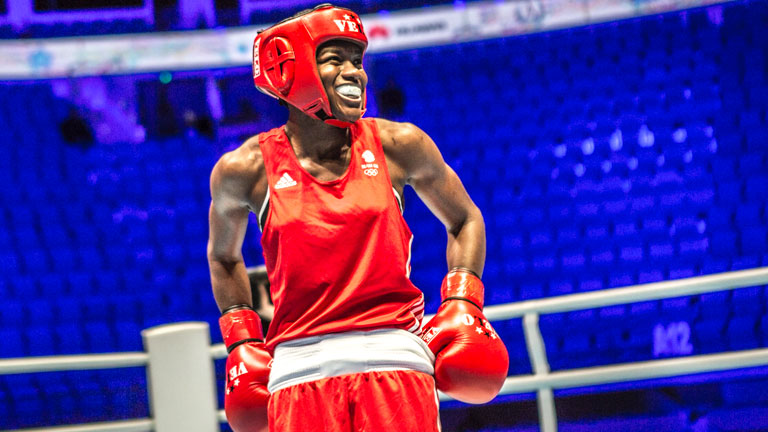 NICOLA ADAMS booked her place in the finals of the AIBA World championships on Thursday, repelling the spirited challenge of Kazakhstan’s Zhaina Shekerbekova at the Barys Arena in Astana. The host nation flyweight, a southpaw, buzzed forward, flicking jabs and trying to catch Adams with lead right hooks. But Nicola took the sting out of Shekerbekova’s work, establishing her own left and bringing in well-thrown right crosses. Ultimately the Briton secured a clear, unanimous win, 39-37 for all three judges.

“It wasn’t easy, up against the home nation fighter, it was always going to be tough. Again I brought my A-game, I gave 110 percent and this time it paid off,” Nicola, the London 2012 Olympic gold medallist, told Boxing News.

In the 51kgs World final on Friday Adams will box Thailand’s Peamilai Laopeam. “I’m really looking forward to the final tomorrow. One more fight to go and hopefully I can complete the set, become a World champion,” she added. “This gold medal means everything to me. I’ve been wanting this one my whole career. I’ve had three silvers in the Worlds and it’s time to turn this one into a gold.”

Her GB team-mate, middleweight Savannah Marshall won’t be joining Adams in the final. In the middeweight semi-final the Briton did track forward and apply pressure, scooping hooks to the body and knocking Nouchka Fontijn on to the backfoot with her right. But the Netherlands 75kgs was mobile, cantering away from Marshall frequently and firing off thumping crosses that just caught Savannah too often. Fontijn took a unanimous decision. Crucially though Marshall did qualify for the Olympic Gamess at this tournament so, like Adams, she will be going to Rio 2016.

There was a big shock for Katie Taylor. Click HERE to read on