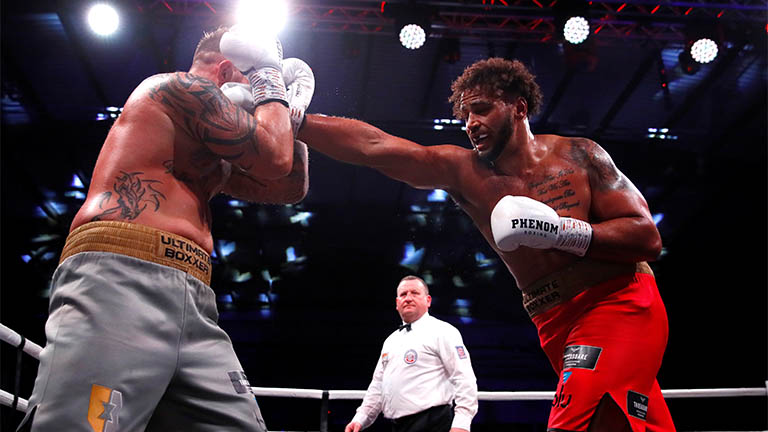 THE sixth instalment of Ultimate Boxer, this one up at heavyweight, saw a return to Planet Ice and a win for Chertsey’s Nick Webb over Doncaster’s unbeaten Mark Bennett, who had endured two particularly gruelling bouts just to make it through to the final, his semi-final contest particularly so.

All three scoring judges, Mike Alexander, John Latham and Darren Sarginson, had the final 30-27 at the finish. Referee was Howard Foster.

Working behind the jab in the opener against a boxer and ex-soldier dubbed “Bad News”, Nick moved into an early lead. A clubbing right also contributed to his cause and while the Scott Welch-trained puncher extended his lead in the next he certainly didn’t have it all his own way – Bennett smashed home a booming right about 60 seconds in before Nick restored parity with a discombobulating left of his own.

Making sure in a battle of 6ft 5in boxers, Nick stayed busy behind that controlling lead left. Bennett, tiring at the tail end of a particularly tough night, was unable for the most part to get close enough to do any real damage.

Nick’s route to the final had seen him put paid to the hopes of both Stockport’s Chris Healey and Silsden’s Danny Whitaker. Healey was eliminated from the tournament in the quarters by virtue of a split decision verdict, judges Latham and Sarginson having Nick winning 29-28 while Mike Alexander felt Healey had sneaked it by the same score.

With little early daylight between the old adversaries, it was Nick who looked to have made the breakthrough in the later half of the second when he found the space to crash home a weighty right.

But there was success too in the early part of the next for the Stockport boxer, a left snapping back Webb’s head before the taller man responded with two rights of his own. Chris ducked below a third and it finished with Webb doing most of the pressing.

Taking the short route to the final, and silencing those hoping for a tournament win for novice Whitaker, Nick required just a second shy of three minutes to progress. A right uppercut and a short left sent Danny to one knee in centre ring and referee Mr Latham correctly waved a halt with the Yorkshireman clearly still unsteady despite having risen.

As mentioned previously, Bennett’s passage to the final had been much tougher. His split decision quarter-final win over game Scot Jay McFarlane proved a “bombs away” affair from the very start, leaving ringsiders wondering just how much the victor had left in reserve for the next stage.

On more than one occasion in the hell-for-leather opener, Jay’s pink trunks looked seemingly bound for his ankles, referee Mike Alexander saving his blushes and pulling them back up.

Venturing increasingly onto the front foot from the mid-point of the second, the unbeaten Doncaster man was seemingly edging ahead. Experiencing his own problems in the shorts department in the last, he booked a semi-final slot with a number of decent rights seeing him home.

Judges Foster and Latham both scored 29-28 for Mark with Darren Sarginson having it 29-28 for tattooed Jay.

If Bennett was hoping for a slightly less demanding semi in his all-Yorkshire showdown against shaven-headed Halifax puncher Josh Sandland, then he was in for a disappointment.

Josh might well have twice been sent to the canvas, initially due to sheer accumulation of punches in the very dying embers of the opener, and then again following a right hot on the heels of a decent spell of his own in the next.

But summoning reserves of strength from somewhere and refusing to capitulate, he came storming back in the furious, stirring last session, bulldozing forward and threatening to turn the bout on its head. Ultimately though, and despite his best attempts it wasn’t to be with judges Foster and Latham scoring 29-26 for Bennett and Mr Sarginson having it closer at 29-28.

Sandland and Whitaker had made it through to the semis thanks to identically-scored victories over Plymouth’s Kamil Sokolowski and Sydenham’s Jonathan Palata respectively, all three judges tallying 29-28 in both contests. Sandland was just that little bit busier and Whitaker rallying after dropping the first.

Manchester’s Darren Sarginson refereed all five undercard bouts, chief amongst them a six that saw wildly popular London-based Albanian Florian Marku secure a 60-55 win over Sutton Coldfield’s tough Nathan Bendon. The scoreline however doesn’t reflect the effort put in by Bendon, who contributed well to a cracking bout.

Ashton’s Ryan Oliver returned after 13 months inactivity and outscored old foe William Warburton of Atherton 60-55 in an oft-tame affair which came to life only in the later stages.

“Warby” has his 200th bout at Bolton this weekend.

Dukinfield cruiser Damian Chambers hit too hard and too often in a scheduled six against Bulgarian Mladen Manev who, increasingly hurt to the body, retired at the end of the second.

And there was victory against overseas opposition too for both Stockport’s Jack Booth and Bolton’s Khaleel Majid, Booth taking all four rounds in a one-sided encounter against Lithuania’s Vaidas Balciauskas and Majid looking polished prior to referee Sarginson stepping in 84 seconds into the second of a scheduled four to rescue out-of-his-depth Hungarian Istvan Kovacs.

The Verdict Webb gets his career back on track following a couple of inside the distance setbacks.