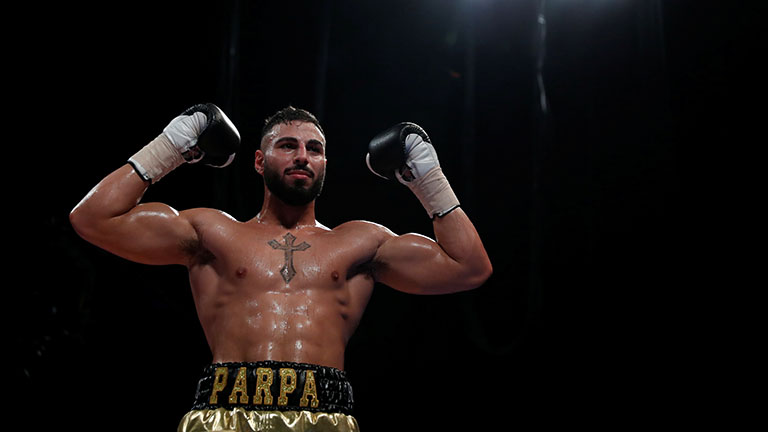 At the end of 10 rounds Parpa (Palmers Green) threw up his arms in delight, while Mendes walked disconsolately back to his corner. Referee Lee Cook’s 99-91 scoreline told the story.

It was Mendes’ first defence of the title (then vacant) he won in this ring by outscoring Danny Couzens in March. That too was scored 99-91 – but against Couzens Mendes countered effectively against his aggressive opponent, whereas this time he let Parpa make the running, covered up and did little in reply.

Southpaw Mendes (Ilford) was cut by the right eye in the fourth, and by the sixth his white trunks were spattered with blood. Bizarrely, Parpa had a lump on the back of his head, and wasn’t allowed out for the seventh without a careful examination by the doctor.

Mendes had his moments. A big right uppercut shook Parpa in the eighth, and in the 10th a combination sent him staggering back. But every time he was caught, Parpa took the play away by coming straight back, winning round after round on sheer workrate.

It was a fast-moving, entertaining battle, with Felix using his extra reach to pick up points, scoring with long lefts to head and body. Vian covered up and hit back when he could, but generally fell short.

There were some good exchanges, notably in the sixth – and Vian made a big effort in the last, pressing forward and forcing Felix on the retreat. But it wasn’t enough. Vian finished with a graze by the left eye and a cut on the left eyebrow.

Put a London small-hall regular, on seven straight wins, against a Lithuanian who’d lost his last 19, and you wouldn’t be surprised for the four-rounder to finish 40-36.

What was surprising that it was the visitor, Edvinas Puplauskas, who got the win, ruining Tony Bange’s unbeaten record.

Puplauskas served notice in the first, rocking his man with a solid combination to the head – and when Bange (Wraysbury) came back he was caught by a left hook.

Puplauskas used his height and reach advantages in the second, beating Bange to the punch. By the third Bange had some damage around the left eye – the visitor was put down by a low blow, and referee Cook gave him time to recover. Bange was caught by a right to the head in the last, but always looked to fight back.

There was another shock in the four-round curtain-raiser, when Southwark-based Italian Victor Edagha (one win in his previous 63) outscored Teddington’s popular Kieran Leinster, referee Mark Bates scoring 39-38.

Leinster’s fans weren’t happy with the verdict, but I thought Edagha had just about got there. He hit back resolutely and presented an awkward target, twisting one way and the other.

Edagha was under a bit of pressure in the second, and held on – but was catching Leinster in the third when he came forward. Edagha really took the initiative at the start of the fourth – Leinster came back at him, and Edagha was bundled through the second and third ropes.

In a women’s four-twos, Sam Smith (Leeds) came back from her losing European title bid in March and was surprisingly held to a draw by Lithuania’s Vaida Masiokaite, referee Jeff Hinds scoring 38-38.

Since winning her debut in her own country, Masiokaite had gone winless in seven bouts in the UK (one draw). But she proved a real handful, countering effectively as Smith came forward – and although Smith never relaxed the pressure I thought the visitor a tad unlucky.

Angelo Bevilacqua (London via Milan) met stubborn resistance from Gateshead’s Kris Pilkington in their super-lightweight six, but ultimately came through by 58-56 on referee Bates’ card.

Pilkington did well for two rounds, but from the third Bevilacqua’s extra strength started to tell. Pilkington tried to grab the initiative in the fourth but was met by hard counters – and was staggered by a left hook in the fifth. Pilkington fought back gamely to the last, finishing with bumps under both eyes.

The one inside-schedule win on this Goodwin Promotions bill came when Poplar’s Terry Conroy halted Slovakian Ladislav Nemeth at 2-28 of the fourth (scheduled for six).

Both went on punching after the bell to end the first, and referee Bates took time to warn both at the start of the second. Conroy used his reach, but Nemeth came back at him.

Conroy was warned for hitting behind the head in the third, and Nemeth lost a point in the fourth for a punch on the break. That seemed to demoralise the visitor – when Conroy launched an attack Nemeth simply covered up, not throwing anything in reply. The towel came in from Nemeth’s corner, and Mr Bates signalled the end.

Popular Neon Samuels had a tougher-than-expected debut against Hull-based Lithuanian Zygimantas Butkevicius, squeaking home (luckily, I thought) for referee Bates by 39-38 over four. Samuels finished with a swelling high above the left eye.

Out of the ring since winning his debut in May last year, Ipswich’s Ryan Copland came back with a four-round win over Kevin McCauley (Stourbridge), referee Cook scoring 40-37.

In sixes, there were 60-54 wins for Wembley’s Youssef Khoumari over Bere Alston’s Des Newton (Hinds) and for Umar Sadiq (Ilford) over Middleton southpaw Darryl Sharp (Bates).