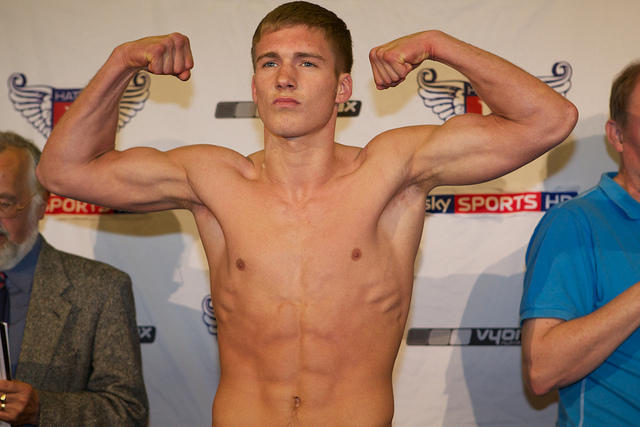 Shaun Brown got more than he bargained for in a conversation with British middleweight, Nick Blackwell

SOMETIMES there isn’t much a boxing writer can do to make his own work as good as the quotes given to him by the man on the other end of the phone.

You may have prepared diligently and attempted/pretended to be intelligent with your questions, but on some occasions all you need to do is sit back and let the fighter make your task a bit easier.

Take Nick Blackwell for example. Boxing News Online caught up with the 23-year-old, 15-3 (6), middleweight contender last week ahead of what may be one of the six-round contests of the year when he faces Sergey Khomitsky, 29-11-2 (12) this weekend in Monte Carlo.

There was the usual talk of camp, preparation and the opponent, but if the answer was initially predictable then what followed in the next few sentences occasionally had nothing to do with the question.

So when we asked: What are you expecting of your new promoter (Mick Hennessy) and yourself over the next 12 months? Blackwell’s answer began with “Obviously I want that British title shot but the main thing is to keep busy.”

And then a few lines later we somehow got onto Max Bursak, a former European middleweight champion that Blackwell gave plenty to think about when dropping a 12-round unanimous decision to him in Ukraine last year.

“I was offered the Max Bursak fight again,” said Blackwell. “And I said ‘Yeah that’s the fight I want’. I thought I beat him in Ukraine and it’d be good to settle it in Monaco or on a Channel 5 (Hennessy’s TV platform) show but they wanted it at 74kgs (163lbs) and I said ‘Yeah that’s fine’. They knocked it back thinking I’d say no so they didn’t want the fight in the end.”

Anyway, back to Khomitsky. A 40-year-old Brit-slayer in the making. Frank Buglioni will testify. That bad night at the office went six rounds for Frank, before referee and corner had had enough, despite it being scheduled for 10. Sat’s fight is scheduled for a 6x3s because….?

“I think it’s because of the casino we’re fighting at,” Blackwell answered. “I think they want to get the show done as early as they can. I’m the first fight on. They’re squeezing me on.”

Six-round fights never spark much of a flame in fight fans but this one will and it most certainly has for the Brit hoping to be the ace in the pack at middleweight.

“I’ve never trained as hard as I have for this fight against Khomitsky,” said Blackwell.

“I was there when he fought Buglioni and I wanted the fight with him straight away. I had a fight called off early October so I’d been training for 12 weeks solid when it got called off so I’ve had about a 16-week camp for this fight. I’d be fit for a 15-round fight. When the Khomitsky fight was offered I took it straight away.”

“He’s a world class fighter,” he added. “I know he’s 40 years old but he’s Felix Sturm’s sparring partner. Some people think I’m stupid taking this fight. It’s a fight that’s made for me. He’s a strong come-forward fighter like myself. I know I’m quicker than him. I’ve showed in sparring that I’m on a different level to what I was and I’m getting better all the time. I just want to show that to everyone. I want to put a statement out to the other middleweights in fighting Khomitsky. People in sparring will tell you how good I am.”

And that was a good 180 words on the recent world title challenger. Then in the same breath, Nick shifted the conversation to Adam Etches. That prompted some no holds barred honesty.

“I went over to watch Adam Etches (when he fought Samir Santos Barbosa in Sept). I stood there thinking I’m 100% confident I’d beat him.”

Okay. So what do you think about what the unbeaten big punching crowd pleaser is doing with his career?

“Financially, fair play to him but when you’re kicked in the deep end and you’re not in your hometown and you’re fighting someone who will punch back then he’s going to be in a situation where he’s never been before. I’ve been kicked into the deep end so many times in boxing so I’m used to it. He doesn’t know what it feels like. He’s wrapped in cotton wool. When I was watching him, Mick Hennessy asked me what I thought of him and if it was a fight I fancied and I said ‘In my honest opinion he’s rubbish. Get me the fight in December’. His manager, Rich whatever his name is, doesn’t want none of it. He’s saying they’ll go their own way to get a world ranking. Etches said he’d fight any middleweight in Britain. I saw him after his fight, I was polite to him and shook his hand and said ‘Good fight mate’ but he didn’t want none of me, you could see it in his face. You’re a boxer, take the fight. I want to be involved in massive fights.”

On a more traditional route of writer interviews fighter, it was noted – as it would be by many reading this – that at just 23, Blackwell has fought Martin Murray and Billy Joe Saunders as well as Bursak. Three defeats but three nights of boxing education which so much has been learned from. And as the following quotes delved into some recent sparring, it can only be hoped that gym form is turned into fight form beginning on Saturday.

“In my mind I didn’t have an amateur background, those three fights were my apprenticeship in my boxing career. People said I shouldn’t have fought Martin or Billy Joe but I’m glad I did because I learned so much in those fights and I’ve came on so much from those fights that it’s made me the fighter I am now.

“A lot of people would’ve gave up and there’s been times when I wanted to give up because of money, I was getting paid rubbish money and was getting messed about. They say Khomitsky is a hard fight to come back to but I’ve fought people like Murray, like Saunders and like Bursak. They’re the fights I should be involved in.

“I’ve improved a lot, even Billy Joe tells me that when we’ve sparred, we’re quite good mates now. I managed to fight him for the British once but they don’t wanna fight me now. Billy Joe says he doesn’t want to fight me, he’s got Eubank. He’s got me to step aside so he can fight Eubank. I’m going to fight the winner next year so I’ve accepted they pay me outright to step aside and I fight the winner. I don’t think Eubank’s gonna win anyway, Billy Joe will vacate the belts and I’ll fight [John] Ryder. If Eubank wins he’ll have to fight me but he doesn’t want to fight me either. I’ve improved a lot, I throw a lot more punches and I’m a lot more confident in myself. I never believed in myself because people always used to put me down. I sparred [Matthew] Macklin and gave him a good hard spar. [James] DeGale was out watching me, he’s bigged me up quite a bit. He thought I’d brought Macklin in as a sparring partner for a fight of my own! So all that’s been a big confidence booster with everyone praising me up. I used to do alright against people in sparring now I beat them up and knock them out. I’m feeling good in myself and I hope I show that in my fight against Khomitsky.”