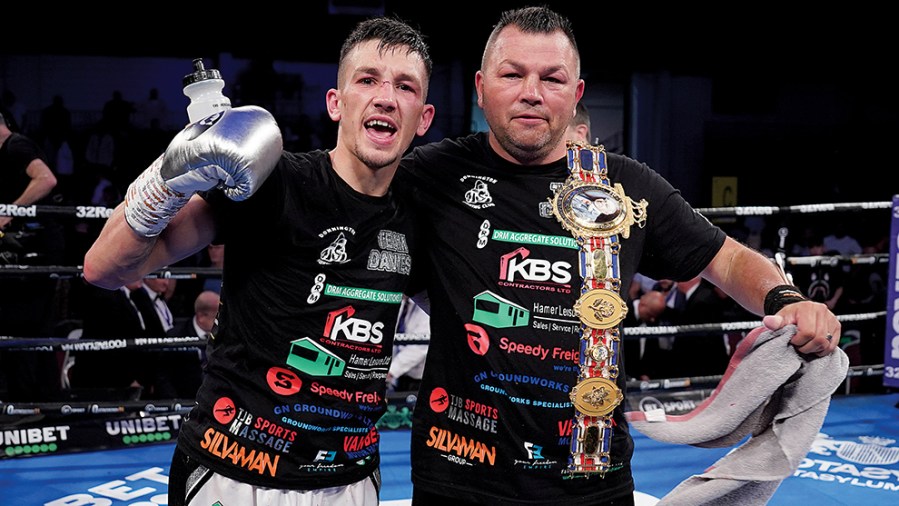 TELFORD’S Liam Davies entered his British super-bantamweight title fight against Marc Leach on June 11 aware of the fact he was the underdog, yet, rather than put out by this, found it to be mostly energising, firmly of the belief his victory would be twice as satisfying as a result.

Not just that, Davies had enough self-confidence, not to mention support from his training team, parents, and late grandfather, to enter the fight with all the motivation and drive he would require to get the job done.

Which is, in the end, precisely what he did. He got the job done by dropping Leach in round one and then winning the majority of the 12 rounds they shared, thus landing the Lonsdale belt he had for so long been chasing.

“I believed I could beat him but a lot of people doubted me,” said Davies, the new champion. “I know what I’ve got inside me and I know I raise my game against better opposition. Against Leach I showed a bit more of what I can do but, don’t get it twisted, there is still a lot more to come.”

Despite scoring a first-round knockdown, Davies, bloodied in that same round, was ultimately forced to go 12 rounds for the first time against Leach, all of which he navigated expertly.

“He headbutted me to cause the cut but then I got the knockdown and he also should have received another count in round six when he sat on the ropes,” Davies recalled. “He’s a tough guy and he was always going to fight to the end. But I believe I hurt him multiple times and he did well to get through it. I think I did well to complete my first 12-rounder, too. It’s a bit like a marathon. Once you’ve done it, it’ll seem easier next time.

“It was a tough fight on paper but I thought I won the fight clearly. The game plan worked. Every time I came back to the corner I had opened ears and I listened to what I was being told and I made it happen. Leach is an awkward fighter and he will beat a lot of the best fighters in Britain. Beating him isn’t as easy as it looks, but I know I’m a strong lad for the weight and hit hard with little gloves. It all came together for me on the night and nothing was going to stop me.”

Having won the title, Davies took two days off – the Sunday and the Monday – before returning to the gym the following Tuesday morning. He did so not only because boxing is his life and he didn’t know what else to do, but also because he hopes to build on this momentum and box again sooner rather than later.

“That’s what I wanted out of my boxing (the British title) but now I’ve got it I want more,” he said. “If I can get the European title, I’ll move on. That’s what it’s all about: moving up the ladder.”

To move up this invisible ladder and attain the European super-bantamweight title, Davies could cross paths with Jason Cunningham, the Doncaster southpaw who defended the EBU belt in Telford, Davies’ hometown, in April. That’s a fight Davies would relish.

“We sparred many years ago when I was about 18,” he said. “I didn’t know at the time we would one day fight but that now looks a possibility. In recent times he has always been ahead of me in the pro game, which I respect, but obviously if he’s number one in Britain that’s the spot I want and he’s the man I have to go through to get there.

“He’s a good fighter but I’ve got no doubt in my mind that I beat him. Hopefully we can make it happen. He might win this fight with (Zolani) Tete and move on from there, but we’ll see. If I do get the fight, I believe I’ll beat him. But it’s one thing saying it and it’s another thing proving it. I want the chance to prove it.”

On June 11, all Liam Davies was interested in was proving his grandad right. He was the one, after all, who once made a habit of telling his friends Liam would one day become British champion and whose death in 2011 hurt Liam more than any punch he could receive inside a ring.

“I planned to take the belt to see my granddad and I had that bit between my teeth to make that happen,” Davies, 12-0 (5), said. “It was going to take more than one man in boxing gloves to stop me doing that.”

The 26-year-old continued: “Growing up as a young lad I spent a lot of weekends at my nan and grandad’s house. He was big into the boxing and ran the Donnington Boxing Club, which since he passed my dad now runs. We always spoke about boxing and he always believed in me. At the time you think your grandparents just love you and are saying things out of love, but maybe there was truth to what he was saying because I’ve done it now. A number of times he would be with his friends and say in front of me, ‘He’ll be British champion. He’s the one to watch out for.’

“I always wanted to believe him but there have been times in my career where it has been hard to keep believing. If you had told me three years ago, when I was boxing on small hall shows, that I’d be British champion in 2022 I’d be lying if I said I would have believed you. It’s been a long road, but I’ve dug in when it mattered and have to thank my dad for that. If I didn’t have a solid and loving father, I wouldn’t be in this position.

“Hopefully I can now make a better life for my mum, too. I grew up with my mum in a Donnington council estate eating jam sandwiches. We had f**k all. But now I can use this title to pay her back for all the pain she has suffered.”