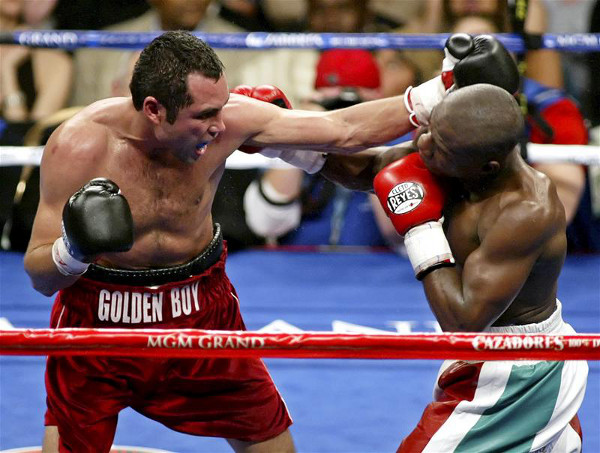 WHILE the two fighters maintained cordial relations over the course of the press conference yesterday at the MGM Grand, the rival Floyd Mayweather and Manny Pacquiao camps have been quietly point scoring. Leonard Ellerbe, CEO of Mayweather Promotions, took his concerns about the height and position of Pacquiao’s groin guard, i.e. that it might afford him undue protection to the body, to the Nevada Commission.

He cited the 2007 Oscar De La Hoya-Floyd Mayweather fight, who for that fight was trained by Freddie Roach, Pacquiao’s coach. “De La Hoya’s cup was well over the navel,” Ellerbe said.

Pacquiao’s team pointed out that while the Reyes gloves that their man will wear have been sent to the commission, Mayweather’s Grants had not arrived yesterday (April 29). There was a dispute over gloves ahead of Mayweather’s first fight with Marcos Maidana last year. It is hoped that ‘glove-gate’ won’t be revisited and ‘cup-gate’ has already been resolved, with Ellerbe now satisfied “there wouldn’t be issues”.

Ellerbe too insisted there would be no problem on that front, saying, “The gloves will be here in plenty of time for Saturday night.”

So the panic is over before it began but, as we count down to the fight, the rival camps will be jostling for an edge, where they can find it.

THE SPECIAL PREVIEW ISSUE OF BOXING NEWS IS ONE CLICK AWAY