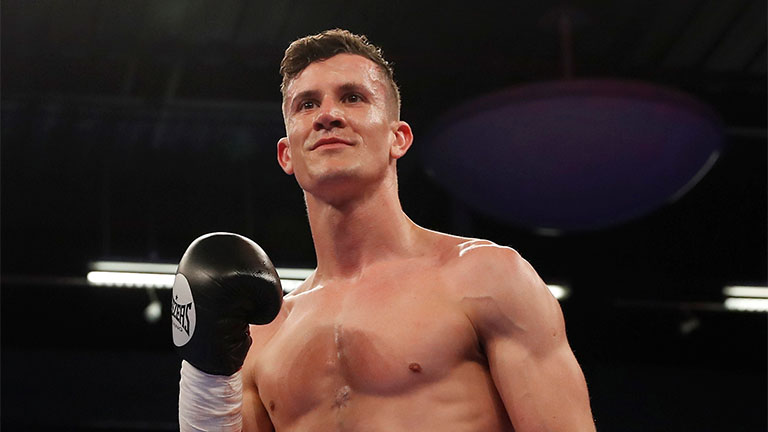 BCB Promotions’ latest offering Stokin’ The Fire attracted a big, noisy crowd to the Kings Hall despite there having been a show at this very same venue just a couple of weeks previously.

On the front foot for long spells and constantly looking for the opportunity to land a big right bomb, Ambomo, while ultimately on the wrong end of a 99-93 score from referee-for-the-night Shaun Messer, kept it interesting.

But any hopes he entertained that the taller, well-disciplined Stokie, who controlled the pace throughout, might either be drawn into a war or come unstuck in the later stages proved unfounded.

Despite eventually emerging a 59-56 winner, Newcastle-under-Lyme super-middle Luke Caci had a nightmare six against game Middleton operator Darryl Sharp. Accidental head clashes in the third and fourth sessions left Caci with cuts to both brows, neither proving overly troublesome but certainly not helping matters.

Amy Timlin from Southam in Warwickshire notched a third win despite conceding weight to a naturally bigger opponent, Mr Messer scoring her four-twos against bloody-nosed Pole Bojana Libiszewska 40-36, while there was a win by the same score for Stoke’s unbeaten Cole Johnson, who dominated against Reading veteran Ibrar Riyaz.

Dudley’s Connor Lee Jones, who came out to the Peaky Blinders theme tune (and could easily have passed for a young Tommy Shelby), scored a 40-36 shut-out over Sheffield’s Qasim Hussain, whose playful antics in the ring may have been a little more exaggerated than usual due to the fact it was his 100th fight. He was presented with a celebratory bottle by manager Carl Greaves in recognition of the feat.

The Verdict A disciplined performance from Heaney with another good 10 rounds’ experience bagged.