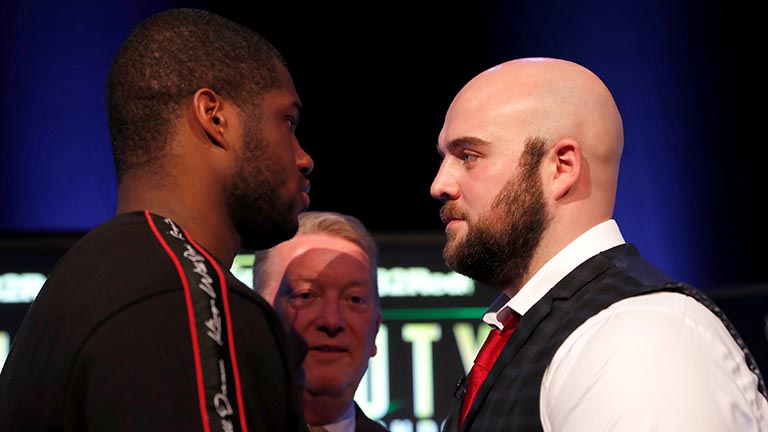 Nathan Gorman sparred hundreds of rounds with Daniel Dubois, and reckons he didn't lose one. He tells John Dennen why looks can be deceiving

YOU will fight Daniel Dubois for the British heavyweight title (July 13 at the O2) but were you afraid you’d miss out on this fight?

I did yeah, you’ve just hit the nail on the head there. When the Board mandated it [Daniel Dubois versus Joe Joyce], I thought f****** hell I’m going to miss out on this fight here. Because to be fair there are some cracking fights to be made between the three of us.

If I was in Joe’s position, I would do the same thing. Which leaves obviously the British title in limbo so I happily obliged.

Do you feel Daniel’s been getting the favoured treatment?

100%. He’s been the golden goose since day one. He’s had everything his way. But the fight’s here now. Once I beat him, I’m the number one. I’ve just got to focus on July 13.

What do you make of him as a fighter?

It makes for an exciting British showdown and a good clash of styles. Him the power puncher, me the boxer with the sharp combinations etc. As a fan, if I was watching it, I’d be licking my lips at this one.

What weaknesses do you see in him?

I don’t think he’s all together there mentally. I really don’t think he is. Has he had the 12 round gruellers yet? He hasn’t really, has he? He’s chinned them all virtually, apart from Kevin Johnson but to be fair no one chins Kevin Johnson. So there’s a lot of weaknesses I see there, a lot of flaws. He’s quite ponderous and slow. He puts himself in a lot of danger, he’s never fought the opposition what can capitalise on that yet, until he fights me.

I know he’s going to come at me like a bull in a china shop. Which I want him to because I’m going to do the same. I’m going to meet him in the middle and we’re going to throw bombs.

Do you think he gets nervous ahead of fights?

He looks very anxious to me.

Can you describe your strengths as a boxer?

My mental side is very strong. I’m a very relaxed character. Nothing really puts me off guard. I take everything in my stride. I’m a very good listener. Whatever Ricky [Hatton, his trainer] says, if he says jump I’ll say how high. That’s the way I’m mentally programmed. There’s a lot of things, my speed, my footwork, my boxing brain.

He’s big, he’s powerful. He’s got a six pack, I haven’t… But looks can be deceiving. Listen, it’s not a body building competition, is it? We’re not going to win a trophy for who’s got the best muscles. We’re in there to fight and do some damage.

What do you think of the comments that have been made about Andy Ruiz against Anthony Joshua?

The minute he takes his shirt off, a lot of people are going to give him no respect or no credit. You’ve got to remember he’s a guy who’s fought for a world title and in my opinion he’s very fast, he’s very sharp, he’s an inside fighter and he can cause Joshua a lot of problems. If Joshua hits him, obviously it’s game over.

This [fight with Dubois however] is in my opinion 70/30 on my behalf. The only chance he has of beating me is if I switch off. I have every other area covered.

I can remember on the GB team, we would spar Monday all the way up to Thursday and we’d spar eight rounds every time. We done that for two to three years. Work it out we’ve down two to three hundred rounds. It was very competitive, we wanted to hurt each other. We weren’t best mates, even in the flats weren’t best mates, we just wanted to do harm to each other. We really did and I felt there was no round I dropped.