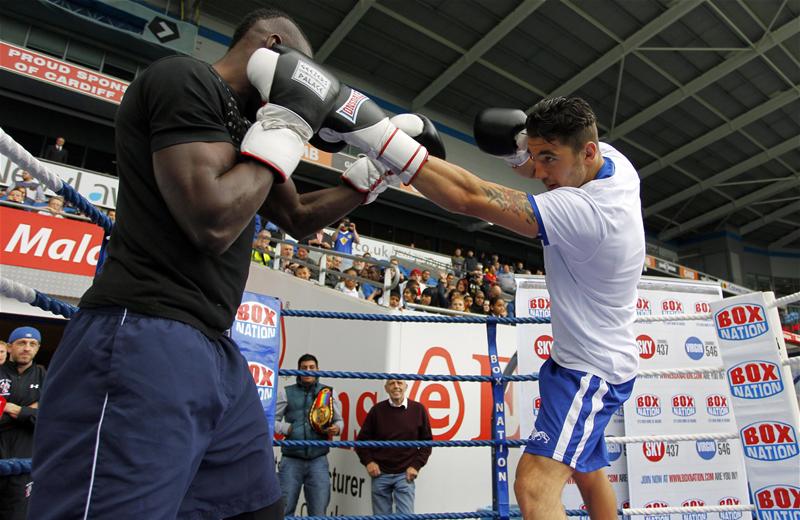 NATHAN CLEVERLY says that beating Alejandro Valori on Saturday night at the Echo Arena in Liverpool live on Sky Sports will lead to a massive British grudge rematch with Tony Bellew – and he’ll beat his bitter Liverpool foe again.

The Welshman defended his WBO light-heavyweight crown at the Echo Arena against Bellew back in October 2011 and made three more successful defences of the title before losing the belt to Russian beast Sergey Kovalev in Cardiff in August.

Cleverly took some time out of the game before deciding like Bellew to move up to cruiserweight and with his love for the sport back in earnest, the 27-year-old wants the big rematch against Bellew then a shot at a world title.

“I believe at the end of this year, or probably at the start of 2015, I will be in line for a shot at the world title,” said Cleverly. “I want to get this job done on Alejandro Valori and then first and foremost it is important I win that fight in good fashion. Then we will look for that big domestic grudge match between myself and Bellew and when I bash him up we will be looking for the world title fight then.

“I think it is realistic that my next fight after Valori will be Bellew. It is a big fight and maybe it should happen sooner rather than later – strike while the iron is hot. We are both fresh at the weight and if all goes well after Saturday we will both be coming off two wins in the weight division. It would be the type of fight where the winner goes on the fight for the world title.

“I have no issue with wherever the fight is going to take place, it is wherever will work best promotional wise. I will let Matchroom and Sky Sports see where they feel it will be best to get the best venue with the best capacity and I am prepared to go wherever. It is something we will discuss after the weekend. To have the home crowd backing and do it in Wales would be a bonus but realistically I think it will be in a big arena. Liverpool is possible and Manchester and London are possible too. We will see what happens.

“My verdict on the first fight was that I was 24 years of age, I went into his home town, defending my world title and I successfully did that. There is no question in my mind, I certainly won the fight and the verdict was there, that was the final result. But he feels bitter at the loss, he wants his revenge, but ultimately I want the rematch because I want to not just win the rematch but I want to win emphatically, and I feel I will do that in the next fight.

“I think the new weight will suit both of us better. I feel we will be stronger, have more energy, more power, so I think the fight will be a replica of the first fight but a lot more explosive with the added weight.

“I am not expecting to come out to cheers or hear people getting right behind me. It might be a little bit hostile at times with the rival supporters but that can fuel my ambition as well and motive me. I will turn that into a positive.”

Cleverly and Bellew lead a line up in Liverpool with local favourites mixing with Olympic heroes.

Super-middleweight talents Rocky Fielding and Callum Smith look to add to their unbeaten records with fights against Noe Gonzalez Alcoba and Vladine Biosse, while Callum’s older brother Stephen keeps busy in an eight-round clash as he prepares to fight for a World title in the new season.