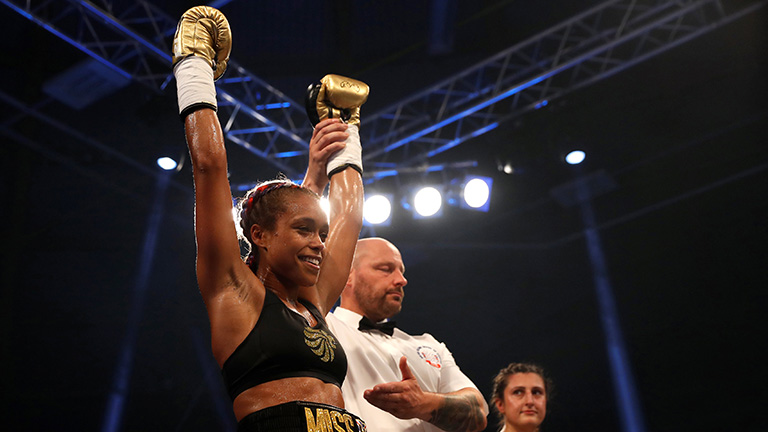 'Miss GB' Natasha Jonas, set for her seventh pro outing on Saturday in Cardiff, has a world title fight and a Katie Taylor rematch in her sights, writes Elliot Worsell

RIVALS will always be vital to the overall success and popularity of a champion.

They’re even more important, though, when you’re Katie Taylor, Ireland’s imperial WBA and IBF female lightweight champion, and cutting through the competition without breaking sweat. It’s then you need rivals not only to keep yourself sharp and motivated but to also keep everyone else interested.

Thirty-four-year-old Jonas, Taylor’s quarter-final foe at the 2012 Olympics, is undefeated in six fights as a pro – five of them secured by knockout – and last time out scooped the WBA international super-featherweight title. Personable and charismatic, the Liverpudlian has star potential and would seemingly be the ideal rival for Taylor, 10-0 (5), an understated champion whose fists tend to do most of the talking.

That’s certainly the view of Joe Gallagher, Jonas’ coach, who believes a showdown with Taylor could be less than a year away, providing ‘Miss GB’, 6-0 (5), conquers Viviane Obenauf on Saturday (August 4) in Cardiff and then bags a world title around September time.

“For Natasha’s next fight [after Saturday], we’re wanting a world title,” Gallagher told Boxing News. “We’re hopeful we’re going to get that world title fight possibly on the [Anthony] Joshua vs. [Alexander] Povetkin bill in September. That’s what we’re after.

“Then, after Natasha becomes a world champion, we want the Katie Taylor fight on St. Patrick’s weekend next year. I think that would be a huge fight.”

This is perhaps the first time a clear schedule has been suggested for a Taylor vs. Jonas matchup. What’s more, there’s conviction in Gallagher’s voice, a sense he means business and isn’t merely grandstanding during fight week for the purpose of drumming up publicity for a fighter, Jonas, who has yet to match Taylor’s profile.

“I saw Brian Peters [Taylor’s manager] put out a press release last week saying how frustrated he is that no one else is doing their bit,” said Gallagher. “Let me assure you, Brian Peters, that we are on the phone to Eddie Hearn [Taylor’s promoter] and Adam Smith [Sky Sports’ Head of Boxing] all the time wanting our world title shot. We are pushing all the time. We’re pushing as hard as we can. We’re not hiding.

“As I’ve said all along, Natasha is a super-featherweight and she wants to become a world champion. She’s got a Jessica Ennis type of story. She retired, became a mum, and came back as a professional. We’re 12 or 18 months behind Katie but we’re catching up. We’ll be ready for Katie Taylor.

The fight, should it happen, would certainly be the shot in the arm women’s boxing probably needs. More than just a fight shoehorned into a card otherwise dominated by men, it would, you’d hope, be a standalone main event of merit, one that would grab the interest of even the harshest critics.

“It’s repeat or revenge,” said Gallagher. “You’ve got ‘Miss GB’, Natasha Jonas, the first woman to represent Britain at the Olympics, against the darling of Ireland, Katie Taylor, who is a huge superstar over there.

“If they want the Natasha fight, Brian Peters needs to get on the phone to Barney Francis [Managing Director at Sky Sports] and Eddie Hearn and say, ‘Listen, you need to do your bit now.’”

But first, on Saturday night in Cardiff, Natasha Jonas must do her bit.