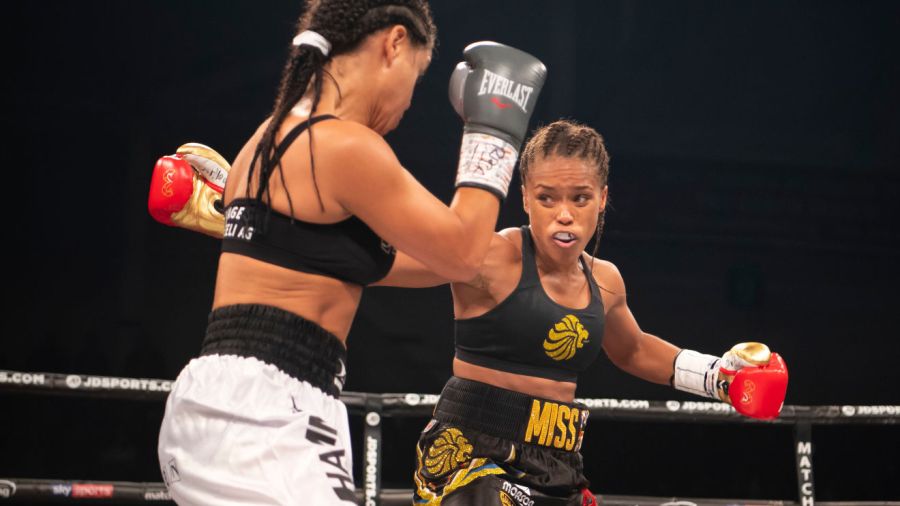 Natasha Jonas has been planning her revenge for nine years. After an epic Olympic clash, she will fight Katie Taylor for all the lightweight world titles

IT’S a fight that for Natasha Jonas has been nine years in the making. She met Katie Taylor in an outstanding Olympic quarter-final at London 2012. Now, on May 1 on the same bill that features Dereck Chisora vs Joseph Parker, Chris Eubank Jnr vs Marcus Morrison and Dmitry Bivol vs Craig Richards, they will fight again for the Irish star’s undisputed lightweight championship.

“It’s the one I’ve been waiting for,” Jonas told Boxing News. “The revenge would be so sweet.

“They can say what they want but not many people will take the Taylor fight because they think they’re going to lose and I genuinely don’t believe I am.”

Jonas was the first British female boxer to qualify for an Olympic Games and the first to compete at an Olympics. When she and Taylor, the star of the sport, met at the ExCel the crowd combined to record the loudest noise of any event at London 2012. “That’s just testament to how good the Scousers and the Irish were together,” the Liverpudlian recalled. “Rounds three and four I went after her, I got a count. At one point I thought I should have given her a count, but I never got it. I just went for it. At the end of the fight I was like I can live with that because that was the best I had and I gave everything.”

Taylor has continued to excel. Coming through hard fights, notably with Delfine Persoon, unifying all four of the major championships at lightweight, as well as claiming a title at super-lightweight. Jonas has always wanted to fight her again but notes, “There’s been a lot of ups and downs on my part on the way but that’s not deterred me in any way.”

Jonas suffered an unexpected loss to Viviane Obenauf, rebuilt and fought Terri Harper for the WBC super-feather title only to draw. “What made it worse as well, at the end of the fight I thought I’d won it by a round but when I watched it back I thought I won it by two, possibly even three. That was even more hurtful,” Natasha said.

With school closed, Jonas’ daughter had been with her throughout that training camp. “She was coming to every session. I was legging it down the track after her, she was giving water in between my spars, she thought she was Joe [Gallagher]’s number two,” Jonas said. “When I come back I had nothing to show to her. ‘Mummy, did you win?’ ‘Kind of. I didn’t lose.’ I think that was more heartbreaking than anything because I literally had nothing to show for that whole 10 weeks, I gave my whole heart and soul, and so did Joe.”

A rematch with Harper had been expected. “I made a lot of noise, I didn’t want to go down a level again. You can get stuck in a rut doing that. Mentally I was in a very, very good place for the Harper camp and for the fight. I wanted to stay there, I wanted to be there and I am still there. I made a lot of noise about wanting to fight any champion, I didn’t want to step down in class,” Natasha said. “When it comes to doing the contracts for [the Harper rematch] and it’s like well actually what we want you to do is fight this one, this one, this one, then Terri. She’s got her mandatory to do, then she’s going to go for this one while you go for these two, so we were never ever getting an instant rematch.

“I think I proved myself at world level and I wanted to stay there.”

Now Jonas gets to move up a division and challenge one of the best, pound-for-pound, in the women’s sport. “There’s power behind it [up at lightweight], there’s more durability because you’re not draining yourself to make the weight. There’s lots of pluses in there. To be fair I’ve come down in my amateur career from 72 kilos,” Natasha said.

“We are two totally different fighters than we were in 2012. I think my shot selection’s better, I think my power’s better and I think my variety of shots has got better.

“She isn’t untouchable like people think. People don’t necessarily point out all her flaws because she’s got so many positive points.”

Jonas went further to say, “To be honest I had her losing both Persoon fights, the second one was probably a lot closer than the first but I thought Persoon had won clearly the first one in New York. The second one, it was a bit of what you liked.

“I think she’s proved that she wasn’t unbeatable.”

Jonas insists her confidence is well founded. “I feel like I’m being fed to the lions, the same as last time, when everyone writes me off, when I’m the underdog, I can pull it out the bag,” Jonas said. “I think the odds are stacked against me and like I say sometimes when the pressure’s on is when you’re the favourite. For me, when I’m the underdog I always like to prove people wrong. I’ve spent my whole life doing it.

Besides, she added, “I would never back down and not take a challenge. I revel in it.”