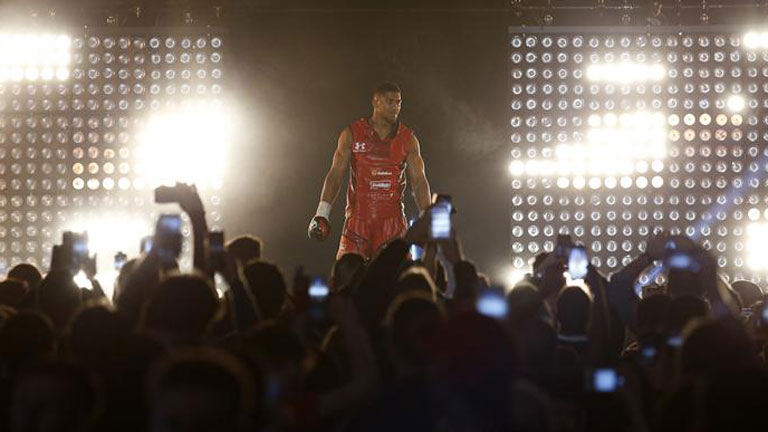 In her latest blog Natasha Jonas looks at how former team mates like Anthony Joshua, Callum Smith and more are faring as pros

GUILLERMO RIGONDEAUX has now pulled out of his fight against Jazza Dickens. But Jazza was taking it even though he would have been a big underdog. In the amateurs you never get the benefit of being able to avoid people. You either fight them or pull out. That’s the only option you’ve got as an amateur. I can’t deal with people who ‘backdoor’ their way to the top and get themselves some version of some title and say, ‘I’m a world champion’ and are happy with that. Because if you want to be the best then you’ve got to fight the best.

Would he have been out of his depth? If I’m honest, maybe a little bit, but hats off to him for putting himself there. I take my hat off to Paul Smith for fighting who he has, and Ricky Hatton for fighting Floyd Mayweather and Kostya Tszyu, no one thought he’d win that. Martin Murray he’s another one. He’s not caring who he fights, he’ll fight anyone and I think that’s how it should be. You shouldn’t backdoor your way to some world title. If you want to be a world champion, go for a proper recognised one.

I’ve been watching my old team-mates’ pro careers. I think amateur boxing now is becoming very similar to the pros. Before it was all about points and not being hit. Now as a pro that style doesn’t work. You’ve got to stop people in their tracks. You need to be able to stand your ground and punch them off.

One’s a sport and one’s a business. You get injured in amateurs, if you get to the GB level you’re still going to get your money each week, you’re going to get the best treatment, get you fit. As a professional you have to look after yourself and if you don’t box, you don’t get paid.

I don’t think the IBF title is out of his reach. I don’t think it’s unrealistic … and let’s be honest he’s going to be very well managed where if he didn’t think he could do it, he wouldn’t do it.

Luke Campbell didn’t look himself in his last fight. Sometimes when you’ve got that undefeated record, it’s an extra weight to carry. You’re trying to be the best and you’re trying to get better and you’re trying to win but you’re also got this undefeated record that you feel you need to keep. I think it can become a bit of a burden. He can just let it go and concentrate on what he needs to do. As you progress and as you get further, how many people have a Floyd Mayweather record? He can think, ‘Okay I’m not going to have a perfect record I’m just going to move forward.’ There’s not many that go through their amateur career unbeaten. You look for lessons, you work on things and then you get back into your next tournament. That’s how it goes.

The biggest shock to me, if I’m totally honest is Callum Smith. I thought he had an amateur style. He had a brilliant last Olympic qualifier and he fought the Azeri. He was unlucky not to get the decision and that was the best performance I’ve seen from him. That whole tournament Callum Smith was on fire but he didn’t qualify. When he turned pro, Callum has shocked me out of everyone. He’s phenomenal.

In my eyes he doesn’t seem to get phased by the occasion. He’s just quiet, gets on with it. If there’s anything that can take us back to the old boxing days, when we had Benn, Eubank and all that, super-middleweight is going to be the weight division to do it and the world will be looking at that weight division. There’s James DeGale, George Groves, I don’t think he’s there yet but he’s on his way and they’re not unreachable for him.