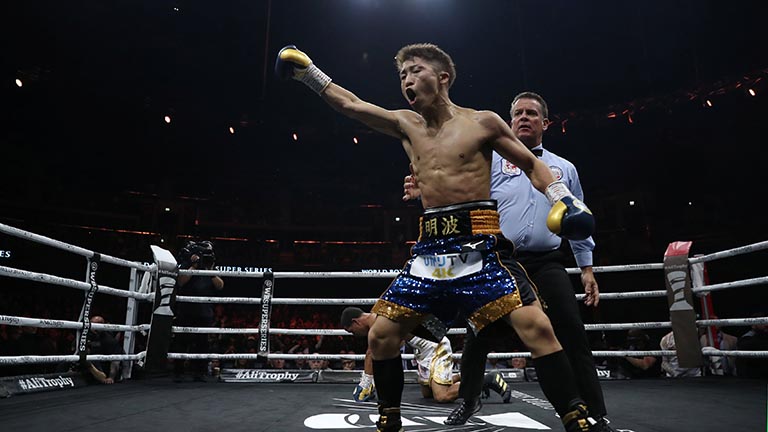 At the SSE Hydro Arena in Glasgow on Saturday, he ravaged Emmanuel Rodriguez with devastating punches. He made what should have been the hardest fight of his 18-0 career look one-sided. The Puerto Rican is a highly skilled operator, an accomplished IBF bantamweight world champion. But Inoue destroyed him inside two rounds.

Rodriguez had come to Scotland with a plan, working his way forward actively in the first round. He landed a right cross to Inoue’s jaw and started to jab well. Working in combination, he caught the Japanese with a left hook to the jaw. But Inoue served a warning shot with a monstrous cross. Rodriguez didn’t let it dissuade him, resuming his attack and placing his own cross through Naoya’s defences.

It was nothing compared to the firepower Inoue unleashed in the second round. A left hook followed a hard right. He blasted a short left in to drop Rodriguez. Blood at once was leaking from his nose, even as the Puerto Rican rose. A merciless left to the body put Emmanuel down a second time. Somehow he recovered but Inoue battered him down yet again. Referee Michael Alexander spared him from further punishment there and then.

“He came out in the first round and gave me a lot of pressure and I didn’t know how it was going to turn out after that first round,” Inoue said self-effacingly.

“I came out looking to perform aggressively. I had that feeling and I kept that going,” he added.

As well as winning the IBF world title, Inoue has booked a place in the World Boxing Super Series final. There it’s the unenviable task of Nonito Donaire, the WBA champion, to tackle the “Monster”.

“Nonito has had a great career, as well as being a great fighter,” Inoue said. “I respect him a lot. I don’t know how I’m going to fight him yet.”

Donaire said, “We’ve always thought we were going to meet each other.

“This is what boxing is all about, the best of the best.

“You’ve got to learn to tame the monster, that’s what I’ve got to figure out.”