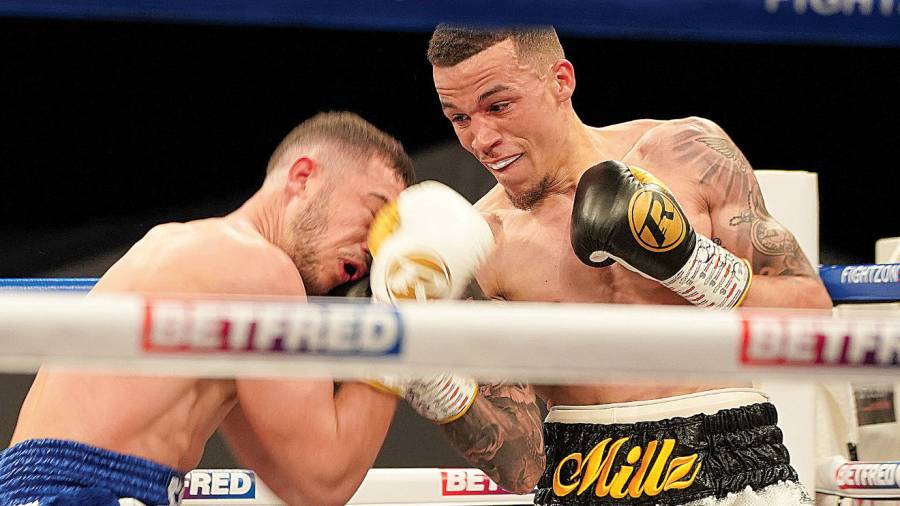 THE main event on Fightzone TV’s inaugural offering was an English lightweight title clash between Derby champion Myron Mills, looking to successfully defend for the second time, and Portsmouth challenger Lucas Ballingall, who had been beaten just once in 14. As expected, it proved to be a close-fought, nip-and-tuck affair.

Making the better start in the cold, driving rain on Friday (May 21) just a few hundred yards down the road from Sheffield Arena, Mills, busier and employing fast hands, opened an early lead. However, he was pegged back in the third as Lucas, scoring to both head and body, began to settle.

It did look for a while in the middle rounds as if the challenger, confidence growing and having made up that early lost ground, might be on course to take the belt, yet Mills was having none of it. A strong last couple of rounds turned out to be just enough for him to hang on to his title. Judges Michael Alexander and Darren Sarginson both had Myron edging it 96-95, while Terry O’Connor scored it a shade wider at 96-94. Mark Lyson refereed.

Sheffield’s Anthony Tomlinson, newly signed with show promoter Dennis Hobson, had initially been slated to top this bill against Wigan’s James Moorcroft, but that meeting will have to wait a little while. In the meantime, they each ticked over in rust-shedding six-rounders against Liverpool-based Lithuanian Genadij Krajevskij and Brierley Hill’s MJ Hall respectively. No surprise at all that Tomlinson and Moorcroft should register shutout 60-54 victories.

Tomlinson eased through a bout refereed by Andy Brook, despite conceding a chunk of weight to the oft-grabbing Krajevskij, while Moorcroft hit too hard and too often for Hall in a fight overseen by Mr Sarginson.

After a 14-month spell of inactivity, Marsham’s Southern Area cruiserweight champion Iain Martell returned in a scheduled four against Derby veteran Elvis Dube, who is now just three bouts shy of his century. Elvis might not win too many but he does upset the applecart now and again. There was never going to be any upsetting here, though. Having been sent to one knee by a punishing body shot in the opener, Dube fell victim to the same left early in the second. This time he stayed down for the duration of referee Brook’s count, with just 22 seconds gone.

Brummie novice Tommy Collins notched his third successive paid win by taking all four rounds (40-36) against Wolverhampton’s Clayton Bricknell. Mr Sarginson was the man in the middle for this one, which was competitive and a decent watch.

A quartet of debutants went in against experienced opposition and, at the culmination of their respective four-round contests, all were able to celebrate victory.

A match between Birmingham’s Katie Healy and seasoned Slovakian Claudia Ferenczi went the way of the former kickboxer and stablemate of Rachel Ball, who watched on from ringside. The score at the finish read 40-36 in Katie’s favour, with the visitor spending a good deal of her time trying to parry the regular jab headed her way. The referee was Mr Sarginson.

Telford’s Bradley Thompson found the going against Middleton’s Steven Maguire to his liking. The brother of English bantamweight champion Liam Davies was actually aided by the inclement weather. Within only seconds of the bout beginning, his opponent, claiming a slip, was counted. By the third, Thompson had upped the pace significantly. Maguire picked up a bloody nose, prior to being halted 71 seconds into the last, with referee Sarginson deciding he’d seen enough.

Bradford’s Nathan Cawood, a southpaw, proved a little too much for Walsall’s Kearon Thomas and ran out a 39-37 winner for referee Brook. Thomas finished marked below the right eye.

York’s Rob Magill came through against Hyde’s Dale Arrowsmith, with referee Brook scoring 40-36. A three-time Yorkshire champion as an amateur, Magill entered the ring just as the rain began and he proceeded to call the shots in an encounter not helped at all by the increasingly slippery canvas underfoot.

The Verdict The awful conditions fail to dampen the spirits of Mills and the other winners.